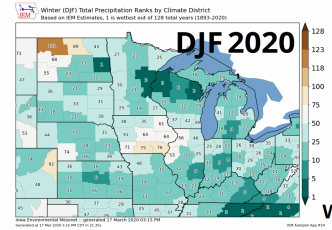 Spring 2020 begins with much of the central U.S. growing region experiencing saturated soils due to excessive precipitation over the last 12 months. These extreme initial conditions raise the specter of another year of delayed or prevented planting across much of the central and eastern U.S., as characterized spring 2019. Widespread planting delays occur when extreme spring precipitation meets existing soil saturation. In our view, the Delta and Deep South are most at risk for delayed planting, with some possibility of localized delays in the eastern and southern Ohio Valley. These regions are most likely to see continued above normal rainfall through May.