Welcome to WeatherTiger’s hurricane hub, providing weekly discussions of active storms and potential threats in the Tropical Atlantic each Wednesday afternoon by 5:30pm between June 1 through October 31. Look for more frequent updates when storms threaten the continental United States, with a particular focus on Florida risks. Get these forecasts first by registering for our Hurricane Forecasting Subscription package here.

Our latest analysis video is above and tropical analysis column is below. A public version of our fall hurricane outlook, detailing our reasoning behind a forecast for a very active season latter third of the season ahead, is now available here.

Another October hurricane is churning in the Atlantic, but in a rare win for 2020, the risk of late-season tropical impacts in Florida has diminished since last week. 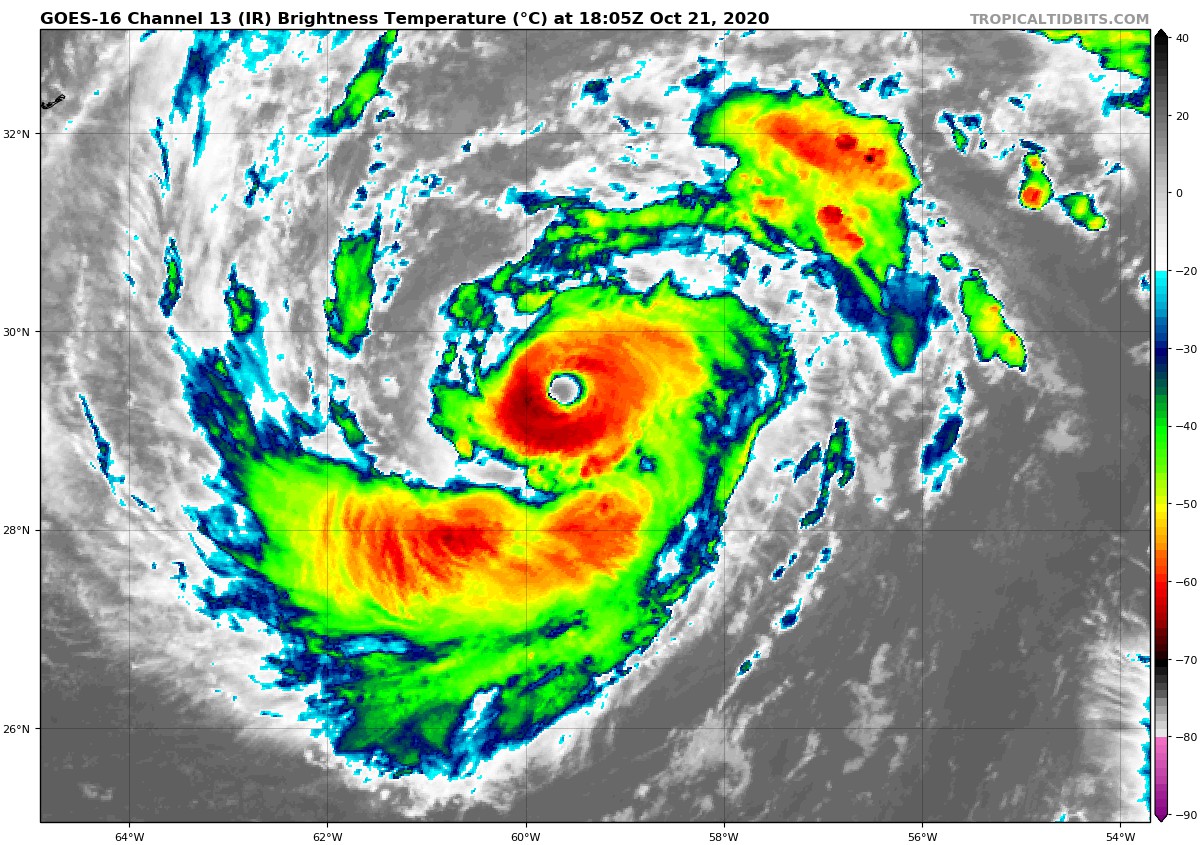 Hurricane Epsilon developed several days ago well east of Bermuda from a non-tropical area of low pressure. Despite these humble origins, Epsilon has intensified rapidly over the last day and a half and is now just shy of major hurricane status with maximum sustained winds of 110 mph as of the National Hurricane Center’s 2 p.m. Wednesday advisory. Hurricane Hunter aircraft noted the presence of a clear, circular eye, and the satellite appearance of Epsilon is currently among the most classically symmetrical of the season.

It is a lot easier to appreciate well-formed storm structure when the hurricane is in central Atlantic no man’s land. Epsilon may briefly reach category 3 intensity by early Thursday, but is no threat whatsoever to the U.S., and will likely pass far enough east of Bermuda for only moderate rain and wind effects to be felt there on Friday. Look for the storm to continue at hurricane strength while turning north and northeast into the weekend, likely transitioning to a powerful non-tropical low over the North Atlantic by early next week.\ 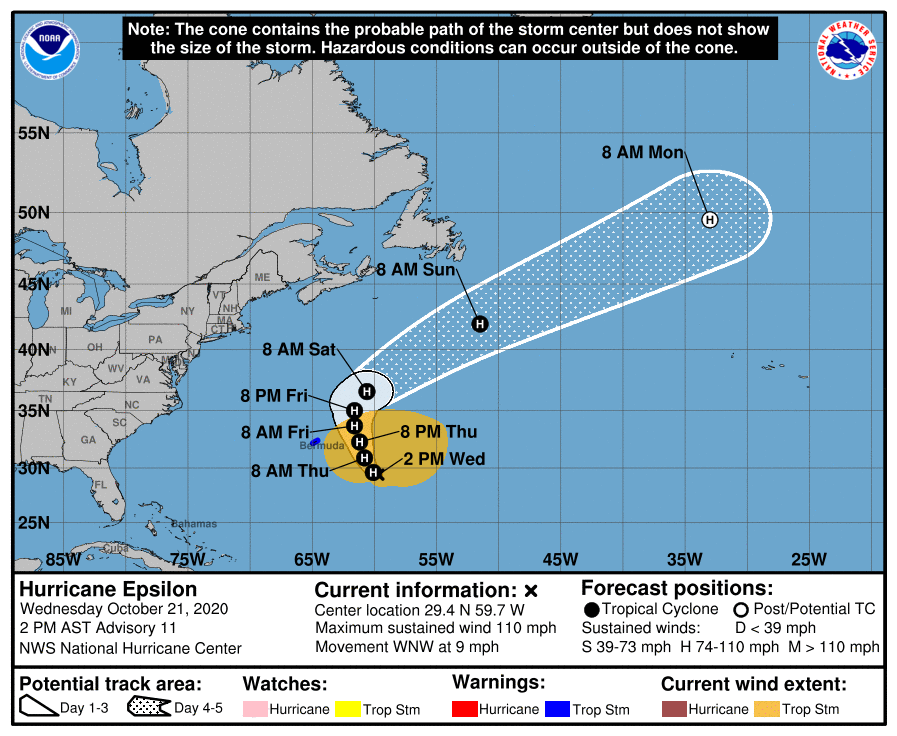 Epsilon is the 10th hurricane and 26th named storm of the 2020 season, which is now just one system shy of equaling the record named storm count from 2005. The great news is that while many models were suggesting the development a 27th storm in the central or western Caribbean Sea, a couple of pattern shifts have conspired to minimize the odds of storm formation there this week. This is particularly important, as tropical systems originating in the Caribbean in late October are climatologically favored to threaten South Florida.

Two lucky breaks are at play here: first, the spin associated with a tropical wave crossing the Caribbean stayed far enough north to not merge with a broader area of turning over Central America. This means that a single area of rotation did not consolidate in the western Caribbean, and the several areas of spin and disorganized convection spread over the region are working against each other’s chances of development.

Second, the continental U.S. jet stream has trended more amplified in the last week, with an usually deep dip over the Plains states and a strong ridge over the Southeast and Western Atlantic. While this general pattern is typically favorable for Caribbean development, in this case, the troughing is so strong that the Gulf and Caribbean are being flooded with unfavorable wind shear. Good news for Florida, as well as for fans of early season snow in Iowa, Minnesota, and the Dakotas.

Some models still are hinting at potential for limited development as this disturbance moves northeast across the Bahamas in 3 to 6 days. With shear remaining brisk over the western Atlantic, these chances are slight. Even if something developed, in this upper-level environment impacts would be limited to just some enhanced rain chances across South Florida for the weekend or early next week. 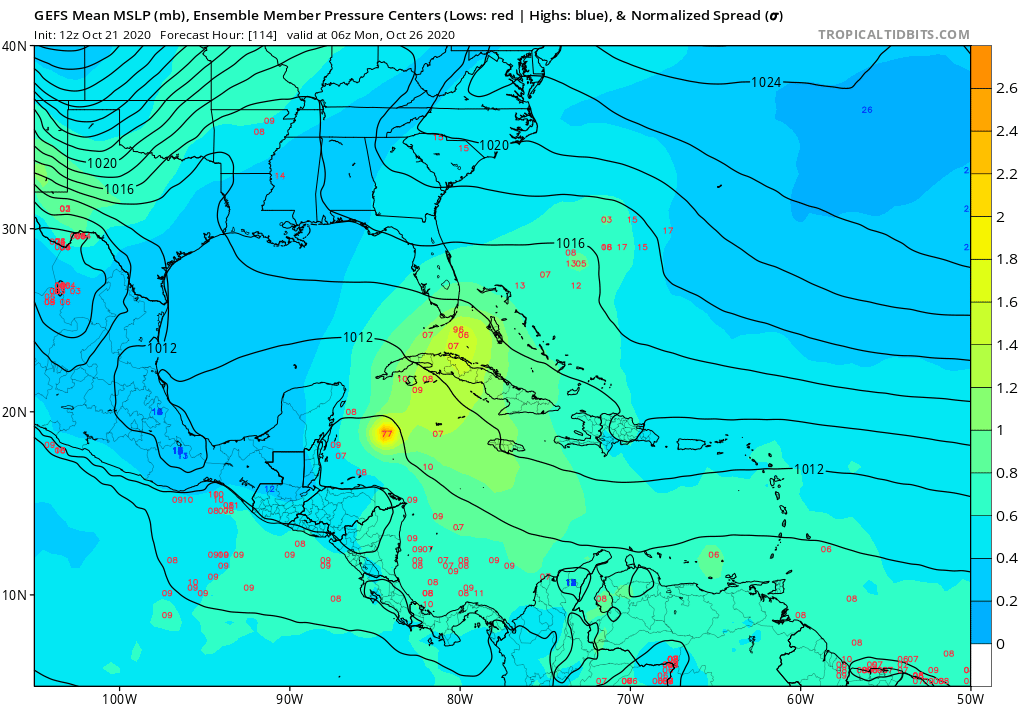 At longer range, we will need to keep an eye on the Caribbean once the crazy swings in the U.S. jet stream start to smooth out in 8 to 10 days. However, Florida has dodged another bullet by the timeframe for possible Caribbean development slipping into late October or early November. Historical landfall rates plunge in the final week of October as sea surface temperatures cool and steering currents increasingly angle away from the U.S., and a major hurricane has never made landfall in Florida after October 25th.

Bottom line is doomscrollers will have to find their supply elsewhere this week, as I’m cautiously optimistic that the season will finish up without further injury to Florida or the rest of the U.S. coast. While hurricane season lasts until November 30th, I’ll talk about why November climatology is minimally alarming in the last regular scheduled column of the year next week. Until then, keep watching the skies.

Dr. Ryan Truchelut is co-founder and chief meteorologist at WeatherTiger, a Tallahassee-based start-up providing advanced weather and climate analytics, consulting, and forecasting solutions to enterprises large and small. Get in touch at ryan@weathertiger.com or follow along on Twitter (@wx_tiger) or Facebook. Get this forecast first by registering for our Hurricane Forecasting Subscription package.