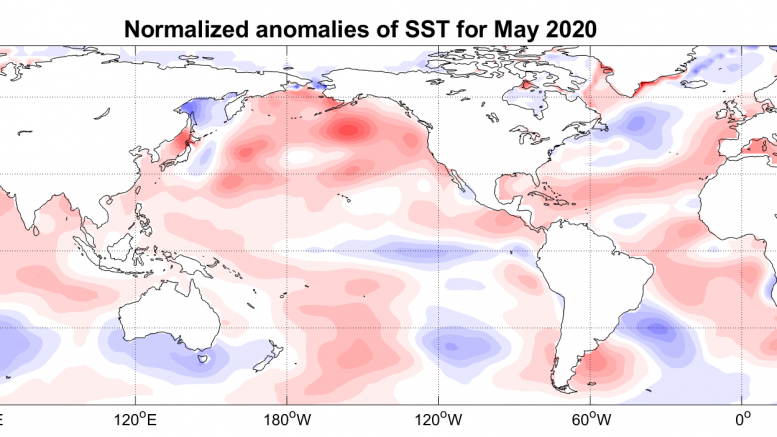 Thank you for subscribing to WeatherTiger. For your convenience, a PDF version of this forecast may be downloaded here.

On a lighter note: hurricane season.

The devil you know is back. Unlike a pandemic, at least taking down the shutters after a storm won’t make it return.

This doesn’t imply that hurricane season 2020 will be reasonable. WeatherTiger’s updated seasonal forecast and a consensus of other guidance favors an abnormally active year. We expect net activity of about three-quarters more than the average season, with 95% odds of more storms than Dr. Birx has scarves.

I’ll get into the forecast rationale and what it may mean for Florida, but first, a quick orientation for new readers: I’m Dr. Ryan Truchelut, President and Chief Meteorologist at WeatherTiger, a Tallahassee-based weather analytics and forensic meteorology firm. I have a doctorate in meteorology from Florida State University and 15 years of commodity weather and tropical forecasting experience. I provide hurricane analysis for USA Today Florida, and am running our hurricane forecasting subscription service for a fifth year, with nary a quiet season yet to the WeatherTiger name. Expect a column and Facebook Live discussion video each week, with more frequent forecasts as the situation warrants at this page.

As an aside, I’m also dad to a one- and three-year-old, so recently I’ve become half-time operator of a two-student preschool, R-Naught Academy (Mascot: The Fightin’ Fomites; Motto: “All your plans r-naught.”). If I’m slow returning e-mail this year, I’m probably pondering how the VeggieTales gang pick things up without hands while Minnie Mouse stickers are lovingly applied to my face. Send wine. 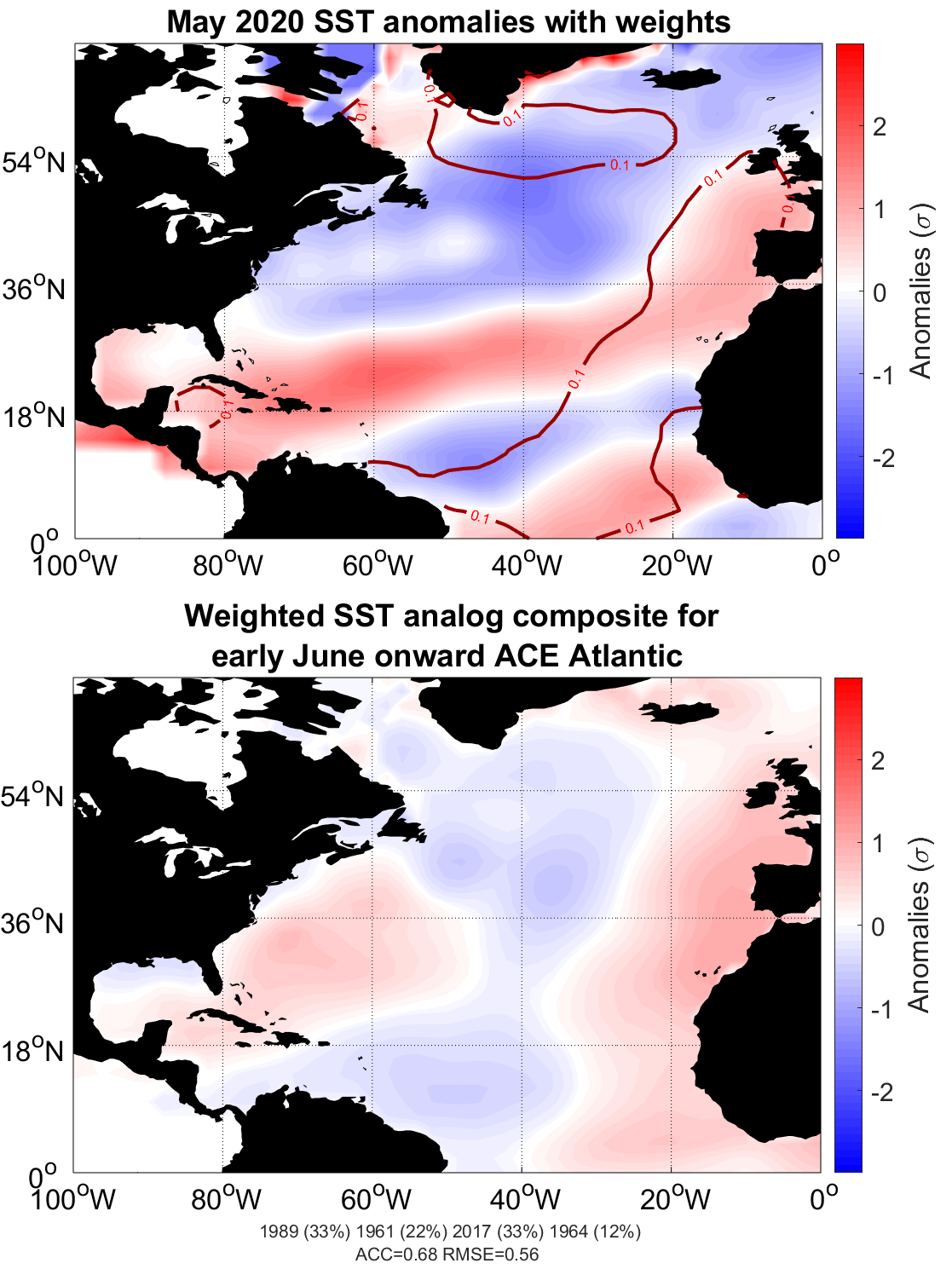 The fundamentals underpinning our June outlook are mostly unchanged since April. (You can read our earlier forecast here.) However, in the intervening time, significant uncertainty has come out of the forecast, requiring an upward revision to our forecast numbers. Water temperatures between west Africa and northeastern Brazil remain about 1°C above normal; more than any other region, warm spring anomalies there presage busy seasons. This oceanic signal is confirmed by robust spring heat in the lower atmosphere over the eastern Atlantic (above), with warmth in the regions with the strongest positive associations with Atlantic TC activity. As May continued, the Atlantic took on more of a classic positive AMO look, with a meathook of increasing warmth arcing from Brazil to Europe to Greenland. This tendency has become even sharper in the first 10 days of June, and gradual MDR warming looks to persist for the next few weeks.

Weighting the regions of the Atlantic that have a strongest relationship with ACE in the upcoming year, the top analog years for Atlantic SSTs to May 2020 are a quartet of active seasons: 1989 (137 ACE), 1961 (205 ACE), 2017 (225 ACE), and 1964 (170 ACE). In each of these seasons, May SSTs had a “bridge” of subtropical warmth extending from the Caribbean to Europe that merged with Equatorial warmth over the MDR over the summer months, leading to a favorable configuration of SSTs for the peak season. They also share cool-neutral or La Nina morphologies in the Pacific, so none of those analogs are immediately invalidated for ENSO reasons. Average ACE in these four seasons was 180-185, which agrees closely with our objective algorithm’s projection.

Alarmingly, the equatorial Pacific Ocean also cooled markedly in May. Our previous outlook highlighted the possibility of summer La Nina development, but clear evidence of an ongoing transition from neutral to weak La Nina conditions in the Pacific raises those chances. La Nina is linked with less vertical wind shear in the Caribbean, Gulf, and western Atlantic. More wind shear means weaker and fewer storms, so La Nina-influenced hurricane seasons are more active and destructive than their El Nino or ENSO-neutral counterparts. WeatherTiger’s latest ENSO modeling for the month of June (below right) has shifted dramatically cooler for ASO than previous runs, with a 60%+ chance of La Nina by October. This is especially significant as real-time model skill improves tremendously between May and June runs due the uncertainty associated with the ENSO spring predictability barrier beginning to diminish. 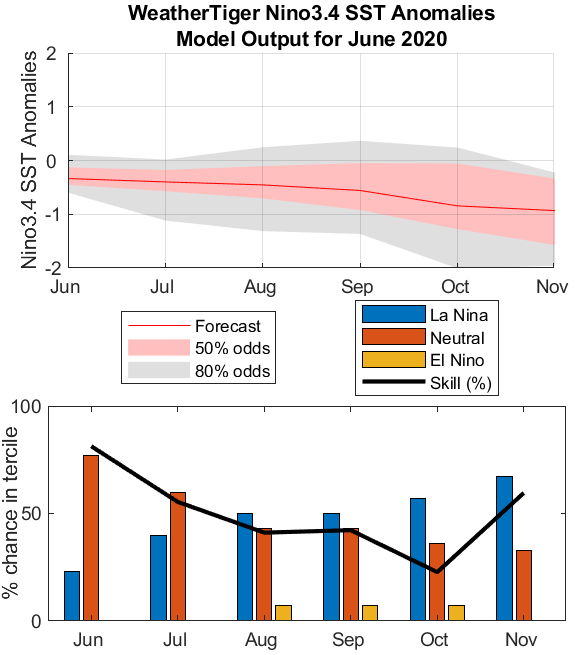 One piece of good news: the Kirkland Signature three-pack of tropical storms that have affected the U.S. coast so far this year (Arthur, Bertha, Cristobal) have no enduring predictive value for the year ahead. Hurricane season 2020 is running hot so far (~95th percentile), but prior TC activity has no correlation with the rest of the season until early August. Of the eleven fastest starts since 1950, five seasons ended above normal, two near normal, and four below normal. This early season activity is a shot over the bow, but nothing more.

Plugging the data into WeatherTiger’s forecast algorithm, the most likely outcome for 2020 is around 180 units of accumulated cyclone energy (ACE), with 19 tropical storms, 8 hurricanes, and 4 major hurricanes. That forecast is significantly above the median season, which has around 95 ACE units. Per our replicated real-time model errors, there is a 50% chance of the season ending between 140-210 ACE units, 16-21 tropical storms, 6-9 hurricanes, and 4-6 major hurricanes. Our exceedance curve for predicted ACE is shown below at left to give a sense of the odds of topping any given level of activity. Historical forecast skill for ACE over 1985-2019 using this methodology is about a 15-20% reduction in forecast error relative to climatology.

Let’s translate that forecast into the chances of a below, near, and above normal season, with examples of how Florida fared in each type of year. 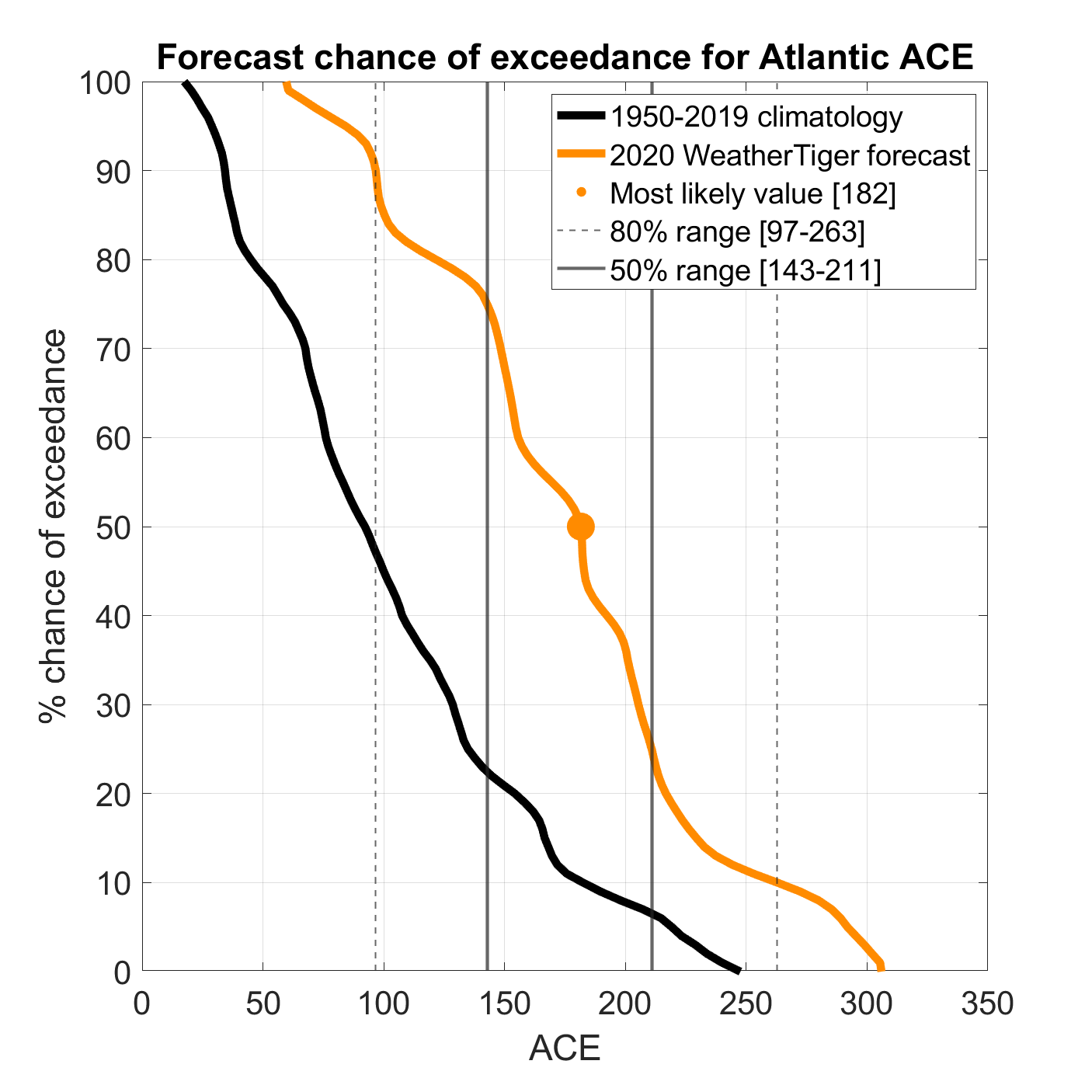 If a below normal (<70 ACE units) season doesn’t ring a bell, that’s because there hasn’t been one since three quiet years ended in 2015. Well below normal seasons are often associated with El Nino conditions. As such, strong shear near the U.S. usually puts the kibosh on significant Florida landfalls, and only one tropical storm hit the state over 2013-2015. Sometimes a season can unexpectedly flame out for non-El Nino idiosyncratic reasons, as in 2013. But I certainly wouldn’t count on that in 2020.

The middle third (70-125 ACE) demonstrates a surprising truth: how many tropical storms develop in a season explains only about 20% of the variability of how many hurricanes strike the U.S., with development location, intensification favorability, and steering wind more important factors. Thus, a busy-normal season like 2011 yielded zero Florida landfalls, while a quiet-normal year like 1992 brought Category 5 Hurricane Andrew. Remember that an average hurricane season has one to two U.S. hurricane landfalls, and it really, truly, only takes one. Overall, if we land near normal in 2020, this too would be a highly fortunate outcome given the initial conditions.

The top third of hurricane seasons (ACE>125) contains the multitudes, ranging from a third more than to two-and-a-half times normal activity. Our model suggests that 2020 tilts towards the deep end of the pool, with 60% odds of ACE over 160, and about a 10-15% chance of exceeding the record of 250 ACE units. 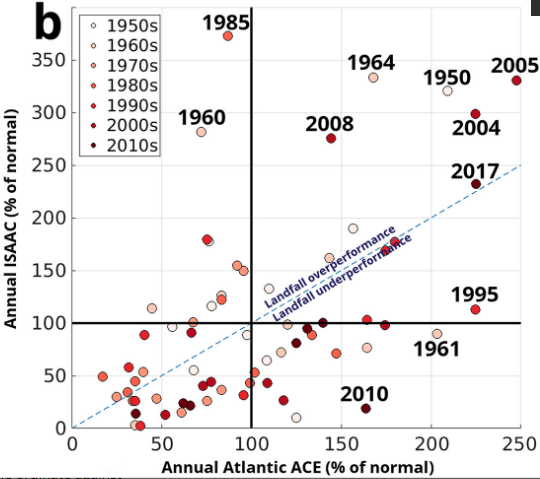 Steering still counts for a lot. The least worst outcome is something like 2010, which despite ACE of 165, saw five major hurricanes curve harmlessly into the open Atlantic, with only two modest tropical storms reaching the United States. The worst-case scenario is 2004, when overall hyperactivity (225 ACE) and a strong, west-based Bermuda high bludgeoned Florida with four hurricane landfalls in six weeks. Above normal years usually have at least one U.S. major hurricane landfall.

Clearly, active years can have modest impacts, and vice versa. While our models have some skill in projecting overall activity from early June, there is very little model skill for predicting net seasonal U.S. landfall activity this far out. We do run U.S. landfall modeling products, which are a bit more predictive later in the summer. We’ll include a more detailed breakdown of U.S. landfall risks to subscribers with our update in early August.

For now, it’s worth noting that the four top Atlantic analogs (1961, 1964, 1988, 2017) each had negative (cool) states of the Pacific Decadal Oscillation. This is not a surprise, as -PDO, marked by cooler than average waters along the U.S. West Coast and Gulf of Alaska, is linked to a Northern Hemisphere jet stream pattern that is less conducive to steering Atlantic hurricanes towards the continental United States. For instance, while 2017 was an extremely active year overall, the net U.S. hurricane landfall activity was exactly what you would expect given the number and strength of observed Atlantic storms (above right, from Truchelut & Staehling 2017). The 1961 and 1988 seasons underperformed in terms of U.S. landfalls by this metric as well. Per my dissertation, it’s tough to have an overall regime that favors both Atlantic hyperactivity and steering currents that direct hurricanes towards the U.S. coastline.

Currently, as of May 2020, PDO is negative but only slightly and trending more neutral. Unlike 1961, 1988, and 2017, there is a significant warm pool across the subtropical and mid-latitude Central Pacific, including the Gulf of Alaska. While anomalies are less warm along the U.S. West Coast, they are not below normal; in that sense, the May -PDO print is somewhat phony, at least for our purposes.

Of the four years in the Atlantic analog set, 1964 is an intriguing analog for both the Atlantic and Pacific. While La Nina was more mature as of May 1964 than in 2020, it was coupled with a notable warm pool across the mid-latitudes in the central Pacific. La Nina only slowly intensified into the peak months of the 1964 season, reaching an ASO value of -0.8, which is a perfectly plausible value for ASO 2020. Comparing the May 1964 normalized SST anomalies above with the May 2020 anomalies at the top of this forecast, you can see there are significant similarities. 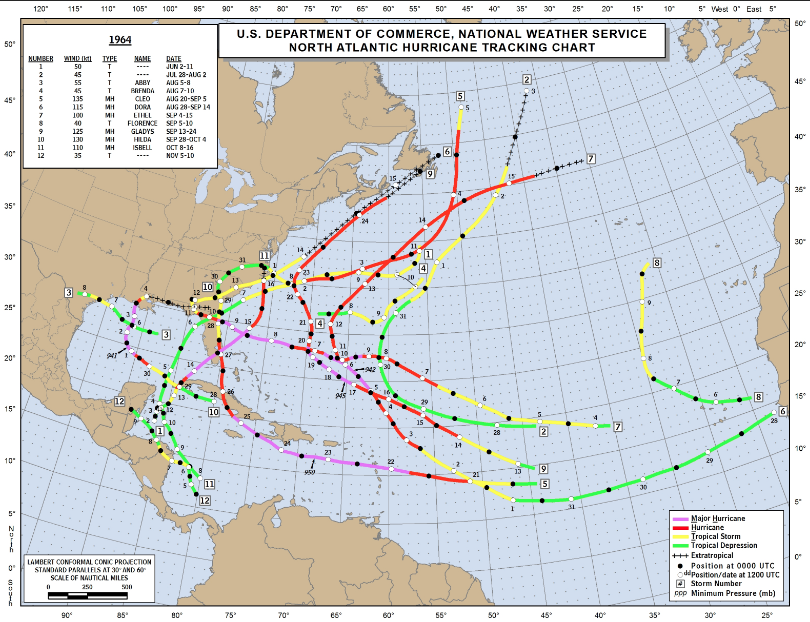 This Pacific warm pool may have played a key role in triggering a steering current regime during the 1964 season that repeatedly put the U.S. at risk. Four hurricanes struck the continental U.S., including Hurricane Dora, which moved west at an unusually high latitude beneath powerful western Atlantic high pressure and struck northeast Florida. Per the landfall underperformance/overperformance plot above, 1964 was an active season (170 ACE), but also punched well above weight in terms of U.S. landfalls (300%+ of normal).

Given the similarities to 1964 in both the Atlantic and the tropical and mid-latitude Pacific, I am concerned this year will not only be very active, but also have a steering current regime during the peak of the season that is risky for the continental U.S., with stronger than average Western Atlantic Ridging. That is, as always, a low confidence forecast at this range, and we’ll have a better idea how those critical steering currents may shape up later this summer.

In the meantime, a plea to prospective 2020 hurricanes: please exercise rigorous social distancing from the U.S. this year. Trust me, you don’t want to come here.

And away we go. Next seasonal update will be out in early August. Until then, keep watching the skies.