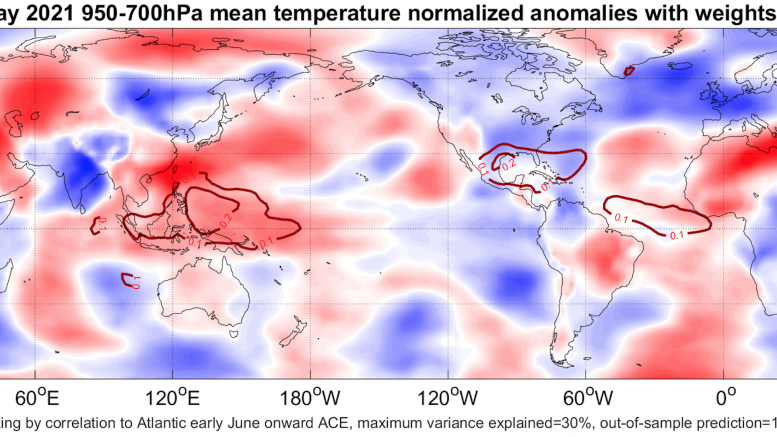 Enjoy this free sample of WeatherTiger’s comprehensive hurricane coverage. If you like what you read, sign up for WeatherTiger’s Hurricane Watch newsletter on Substack. You’ll get Florida-focused daily tropical briefings, our weekly columns (June-October), full forecast and video coverage of hurricane threats, and expanded seasonal outlooks as soon as they are written.

Eternal return is the idea that all events throughout time and space recur in an infinite loop. The Stoic philosophers who originated this concept were likely not inspired by hurricane seasons, mostly due to their lack of timely satellite imagery. However, to observe (or attempt to predict) the weather is to inhabit the realm of cyclical time. Bill Murray is a meteorologist in Groundhog Day for a reason.

Over the past five years, coastal residents have been caught in a seeming timeloop of above average hurricane seasons and frequent U.S. landfall threats. The meteorological pain train of the 2020 season is not dead and isn’t even past, with recovery continuing from two major hurricane landfalls in Louisiana. As the flat circle of time rounds yet another hurricane season, is another brutal year like 2020 ahead?

WeatherTiger’s expectations for the 2021 hurricane season shifted higher over the last two months, but remain shy of last spring’s (accurate) prediction for a hyperactive 2020. The most likely outcome is tropical activity around 40% above the average hurricane season.

Before digging into the forecast, a quick orientation: I’m Dr. Ryan Truchelut, Chief Meteorologist at WeatherTiger, a Tallahassee-based weather analytics and forensic meteorology firm. I have a doctorate in meteorology from Florida State and 16 years of tropical forecasting experience. This is my fifth year running WeatherTiger’s full-service hurricane subscription service, during which time zero quiet seasons and two energetic toddlers have rendered me a geriatric millennial. Expect more frequent forecasts and Facebook Live video coverage during landfall threats.

So, does the hyperactivity of 2020 tell us much about 2021? Thankfully, no. As if directed by Zach Snyder, the 2020 hurricane season was plagued by too many characters and excessive runtime, with a record 30 named storms and the longest-ever gap between first and final U.S. landfalls. (Hurricane Sally also threw gratuitous slo-mo into the mix.)

However, past performance is not indicative of future results.  Less than 5% of the year-to-year variance in Atlantic seasons can be explained by the previous year’s activity, a proportion indistinguishable from chance. The Atlantic has a tendency to run generally hot or cold for several decades at a time, but that does not translate into much predictive power for any particular year.

Seasonal forecasts can be made with an approximate 20-25% reduction in average error over climatology at this range, with skill mainly predicated on identifying precursors to hospitable environmental conditions for storms in the August-to-October heart of the season. Let’s take a look at some of the crucial similarities and differences between 2020 and 2021 and how those influence our forecast:

Similar: Early start to the season. When Subtropical Storm Ana developed near Bermuda, 2021 joined 2015 through 2020 in producing at least one named storm prior to the June 1st start of hurricane season. While this further suggests the bounds of the season should be re-evaluated, it does not presage a busy year. The ten most active pre-seasons on record are evenly split between years that ended below and ended above the median season. As seen above, the there is no relationship between a quick start to the season and where we end up.

Different: Lower chances of a hurricane-favoring La Niña. Far more consequential is whether El Niño or La Niña conditions (or neither) are shaping up in the Equatorial Pacific. Last year, a dive towards cooler Pacific waters in spring indicated a mature La Niña by the second half of the season. When this Niña developed, it brought diminished vertical wind shear and more favorable conditions for hurricane formation in the Caribbean, Gulf, and western Atlantic, particularly in October and November.

The 2020-21 La Niña event ended this spring, and near normal water temperatures are now in place in the Pacific. Neutral conditions likely will persist through the season, muting the influence of the Pacific on the Atlantic hurricane season. While either a weak El Niño or weak La Niña have slim chances of developing by fall, the sustained boost a potent La Niña gave 2020 is unlikely to repeat in 2021.

Similar: Active pipeline of tropical waves. Another key factor in 2020 was persistent rising air over Africa, which spawned a vigorous, season-long train of west-moving tropical waves. These waves are the seeds from which the strongest storms, such as Hurricane Laura, often develop. Seasonal climate models hint that this pattern could repeat in 2021. Additionally, Maritime Continent warmth in May is one of the strongest predictors that a pattern of sinking air over the eastern Pacific and rising air over Africa will set up later in the summer; May temperature anomalies near Southeast Asia are therefore a key predictor in our June modeling. Warmth there, as has been the case this spring, is also often leading indicators of summer warming trends in the Atlantic’s Main Development Region (MDR).

Different: Cooler Atlantic temperatures. There is ground to make up in the MDR. Last spring, water temperatures between west Africa and South America, where warm anomalies best correlate to busy hurricane seasons, were about 1°C above normal. This year, those temps are right around normal, and a little cooler than average in the MDR. While the MDR has had a slippery tendency to warm up just ahead of the peak season recently, a lukewarm spring starting point reduces hyperactive season risks.

Similar: Forecast consensus for active season. Balancing these disparate factors, most seasonal forecast groups are again calling for above normal Atlantic activity in 2021. NOAA’s May outlook for around 50% more total storm activity than average, with a two-thirds chance of 110% to 190% of a typical season, is a fair representation of the current range of predictions, which are available and updated here.

WeatherTiger’s forecast algorithm is slightly less bullish; using April and May SST, low-level temperature, trade wind, and SST change forecast inputs, our most likely outcome for 2021 is around 140 units of accumulated cyclone energy (ACE), against an average of 100 over the last 50 years. We predict 50% chances of 105-175 ACE units, 16-21 named storms, 7-10 hurricanes, and 3-5 major hurricanes. That corresponds to about 5-10%, 35%, and 55-60% odds of below, near, or above normal hurricane seasons, respectively, relative to 1971-2020, as shown below.

The probability of a hyperactive (ACE 165+) season like 2020 is estimated at around 25-30%. This is a little lower than other groups, as WeatherTiger’s model weights the mild MDR waters more heavily. Our key analog years to 2021 at this point are 1955, 1969, 1988, 1995, and 1999, with 1955 probably the best match at this point to both Atlantic SST configuration, cool-neutral ENSO conditions, and a cool phase Pacific Decadal Oscillation. (The 1955 hurricane season produced multiple North Carolina and mid-Atlantic impacts, but no significant issues elsewhere.) Interestingly, our completely separate analog-only forecast method also has converged on a forecast of around 140 ACE for the year ahead, in very close agreement with our regression models.

Finally, the question of landfall risk always comes up at this time of the year. Unfortunately, because the relationship between overall seasonal activity is fairly weak, we haven’t found a way to make reliably skillful predictions of landfall risk at this lead time. However, the PDO has turned robustly negative over the last couple of months, as shown by the hook of cooler waters angling from California to Alaska above. If this persists, it is a relatively good sign as cold phase PDO conditions tend to favor steering patterns over the Atlantic that are more directed away from the continental United States. I’ll keep an eye on that.

In the end, every year and hurricane season puts its own twist on the Mobius strip of time. In 2020, oil cost negative $42 per barrel. In 2021, we frantically filled Taco Bell Phantom Menace cups with gas. In spring 2020, going outside was not recommended. In 2021, the CDC says no mask is necessary to safely claim vaccination lotto winnings by entering a money machine and grabbing as much blowing cash as possible in 30 seconds. Odds slightly favor an active 2021 hurricane season, but there’s no clear sign of another 2020 incoming and uncertainty abounds. The future is unwritten, just like Joe Strummer said. Keep watching the skies.