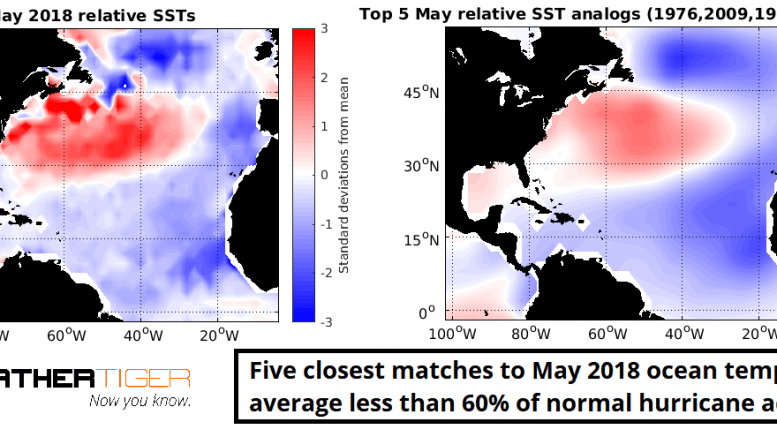 If the 2017 hurricane season was a meteorological Crash-a-Rama, last September was the figure 8 school bus race piece de resistance. As shown above, in energetic terms the year was actually relatively normal (close to 60th percentile) until around September 1st; over the subsequent 30 days, the equivalent of 1.5 entire normal hurricane seasons occurred, ahead of a fairly typical October. As many recall that the melee of 2004 was followed immediately by the all-time #1 Atlantic hurricane season in 2005, the general attitude towards the approach of the 2018 hurricane season has been somewhere between extreme apprehension and night terrors. This is even more true in the wake of Subtropical Storm Alberto, which yielded only light damage and heavy rain across Florida and the Southeast, though it did trap us indoors with an avalanche of privacy policy change emails over the Memorial Day weekend. The good news regarding Alberto is that there is absolutely zero correlation between tropical activity prior to early August and a busy remainder of the hurricane season, as shown below. This lack of a relationship is also true for U.S. landfalls, so from a climatological perspective, the hurricane season may be getting longer, but we can safely regard Alberto as just an advanced irritant rather than an ominous portent.

This perception of another busy season ahead has been fomented by many of the other pre-season forecasts, including NOAA’s 24 May outlook calling for a 75% chance of average or above average activity. While forecasts at this lead time have limited skill and a range of options remain possible, I believe NOAA’s methodology is underestimating the impacts of some massive changes in the Atlantic Basin in the last month.

Basically, I’m about to pour some literal cold water on the expectation of an active season ahead. Over the past several months, the key “main development region” of the tropical Atlantic has cooled precipitously due to stronger than average easterly trade winds between Africa and Central America. Sea surface temperatures (SSTs) across much of this region are now several degrees below normal to start the season. While there is still time for Atlantic water temperatures to potentially recover, this cooling is part of the emergence of a larger pattern typically associated with quiet seasons, known as the inactive or cold phase of the Atlantic Multidecadal Oscillation (AMO). As shown at left above, this cool horseshoe broadly characterized several quiescent decades of Atlantic hurricane activity from the 1970s through the mid-1990s. The opposite, warm phase pattern of above average SSTs in the horseshoe (shown at right above) has generally held firm since 1995, catalyzing several active decades worth of hurricane seasons.

What I’ve done in this above animated GIF is plot the locations of tropical storm development and density of observed storm energy over the quiet 23 years between 1972-1994, followed by the 23 more active years between 1995-2017. As you can clearly see, the much brighter and warmer colors in the Gulf, western Atlantic, and Caribbean indicate not only more frequent, but also stronger tropical cyclones during the positive AMO period. In fact, there were near 70% more TCs in the Atlantic during the same length of time during the +AMO period as the -AMO frame. This relationship also holds true for U.S. landfalls, with the -AMO landfalls shown at left below and the +AMO landfalls shown at right. Similarly, the total count of U.S. landfalls is about 70% higher in the latter than the former. However, the count of major hurricane landfalls increases only a third. This may be due to chance alone, or it could be due to a more favorable environment in the immediate vicinity of the continental U.S. during times in which the Atlantic is less favorable overall.

This broad climatological perspective on the AMO is important because not only were SSTs in May 2018 colder than average in the tropical Atlantic, but there was also a robust warm pool east of New England and a cold pocket arcing from north Africa to west of Old England (see below left). Overall, current Atlantic SSTs are in one of the configurations most strongly resembling the AMO cold phase in nearly 25 years. WeatherTiger’s analytics have identified the five previous Mays most like May 2018 in terms of relative SSTs over the Atlantic: 1976, 2009, 1986, 2002, and 1994.  The composited mean of Atlantic relative SSTs of these five seasons, shown below right, collectively share a remarkable similarity to current conditions, including the locations of the cores of the coldest normalized anomalies near the Cape Verde Islands and east of Newfoundland. Notably, these five years averaged less than 60% of both the overall tropical activity and the Accumulated Cyclone Energy (ACE) over the continental United States of a normal hurricane season. Furthermore, none of the five seasons even topped more than 85% of typical activity.

WeatherTiger’s quantitative and objective seasonal modeling is also homing in on net Atlantic ACE around two-thirds of normal, an agreement between independent methods that bolsters forecast confidence. Putting it together, I’m expecting a fairly quiet 2018 hurricane season, with a most likely outcome of around 65-70% of normal tropical cyclone activity, and a 50% chance of between 50-100% of average ACE. That corresponds to roughly 9-13 tropical storms, 4-7 hurricanes, and 1-2 major hurricanes. I especially expect fewer than usual long-track Cape Verde systems like Irma, which I don’t think will lead to any tears being shed in Florida.

However, this type of season can sometimes favor tropical development closer to the U.S., leading to short-fused surprise storm threats. 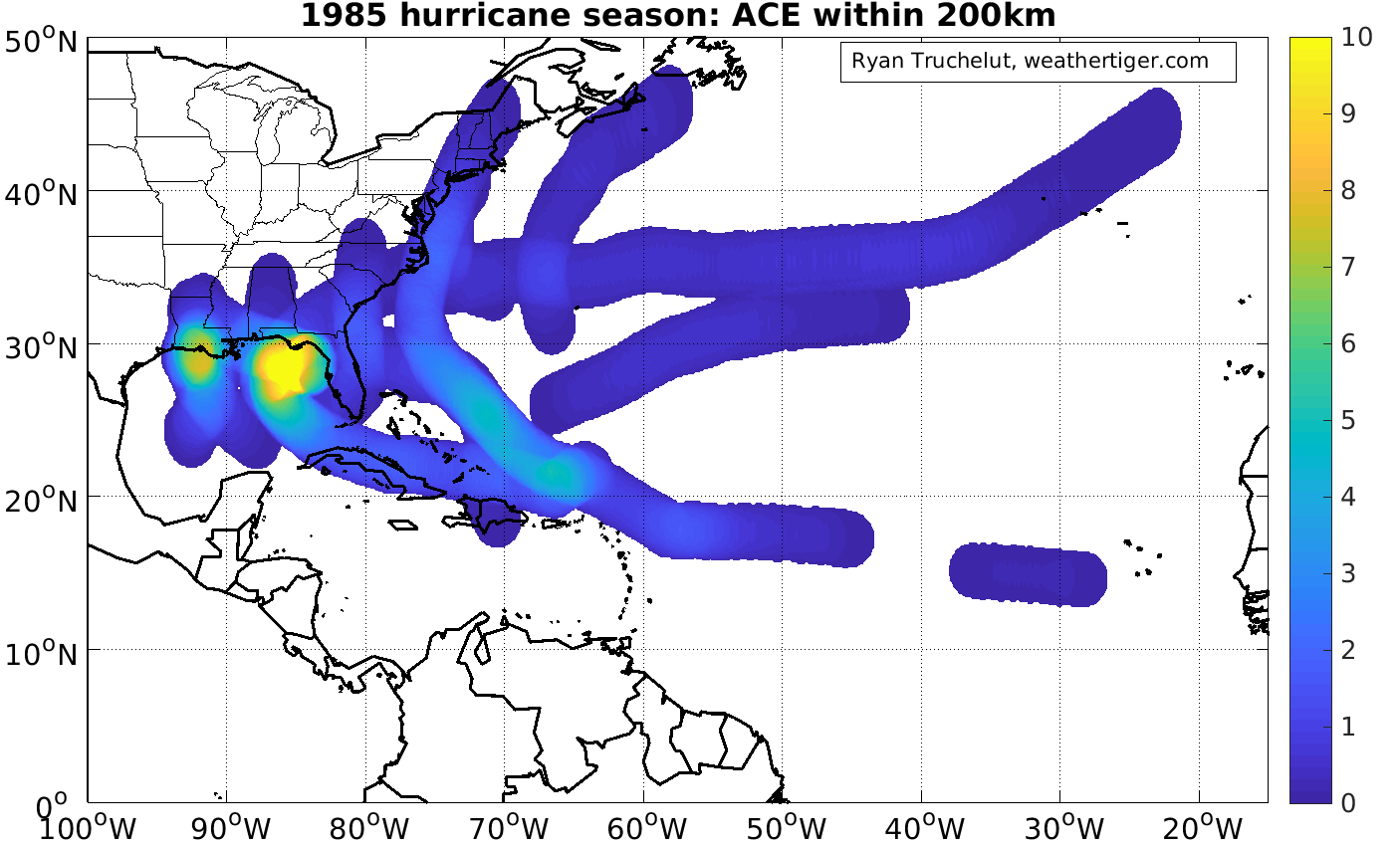 If you look back at the animated GIF of the -/+AMO development locations again, you might be able to note that while MDR development plunges in -AMO cycles, there is much less of a hit to TC formation frequency in the western Atlantic east of Florida and south of the Carolinas. The bar/line graph above plots the net ACE near or over the continental U.S. (which some wags have termed ISAAC) each year since 1900; while net U.S. ACE declines in the -AMO years, it does not quite decline as much as one would expect for the observed decrease in overall Atlantic ACE. There are also several individual seasons within this period that are unimpressive in terms of total ACE, but in which TC activity was highly concentrated near the continental U.S. landmass. For instance, in 1985, there were six U.S. hurricane landfalls despite only one Cape Verde-type TC developing.

I’ve focused on Atlantic SSTs so far in this outlook, and for good reason: Pacific SSTs, the other major influence on Atlantic TC activity that has some predictive power at this stage are in a rather vague state at the moment. While some models were projecting the development of an El Niño event this spring and summer, the equatorial Pacific has merely retreated to neutral-negative conditions to end May, with no prospects of a rapid +ENSO initiating in the next one to three months. WeatherTiger quantitative guidance (below left) for SST anomalies in the key Nino3.4 region of the central Pacific is for neutral conditions to continue through September before potentially heading into a weak Nino early in the fall. In any case, it is unlikely that El Niño will develop rapidly enough to trigger elevated shear and an inconducive environment for TCs over the western Atlantic into the heart of the hurricane season in August and September. And, oddly enough, one of the years best matching the strange cool-neutral ENSO, -PDO, +PMM sandwich in the Pacific is none other than (cue the Bowling for Soup) 1985.

Anyway, this is all to say that seasonal forecast skill in late May remains limited, and due to a fairly weak relationship between overall Atlantic activity and U.S. ACE, this season could under-perform overall but still surprise from an impacts perspective. WeatherTiger will be carefully monitoring developments over the next couple of months and keep you posted how our forecast is evolving, with the next update scheduled for early August.

Remember, no matter how inactive the season, there could always be a LeBron hiding in a cast of anonymous, innocuous Cavaliers. The 1992 Hurricane Season was highly forgettable apart from Category 5 Hurricane Andrew taking its talents to (just south of) South Beach, so you’ll need to stay nimble, prepared, and ready to react to whatever curves the Atlantic throws at us. It’s always a long road to the end of the hurricane season on November 30th, but you can rest assured that the eye of the WeatherTiger is upon the Tropics, and anything it does we’re going to see. Still, let’s hope there’s less to look at in 2018.

Like what you read? Get every data- and science-driven WeatherTiger weekly tropical outlook and individual storm forecast direct to your inbox as soon as it is released. Sign up now for our tropical subscription package to get all of our expert, hype/drama-free forecasts sent straight to you, plus a free one-on-one consultation with Dr. Truchelut. You can also follow us on Twitter and Facebook for the latest as the 2018 season rolls on.