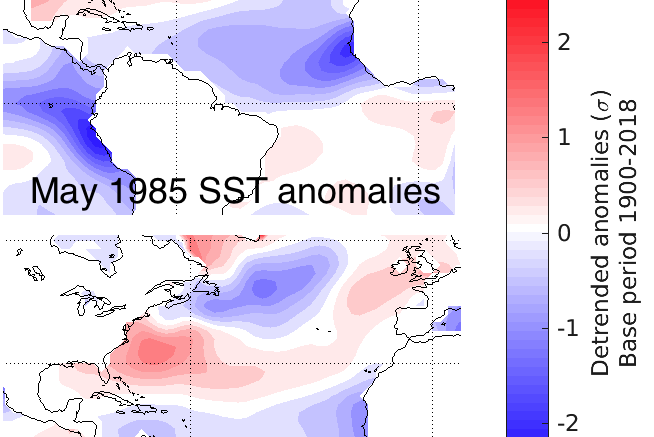 Despite the overwhelming approval on Florida’s November ballot of Amendment 594-Z, cancelling all future hurricane seasons and/or bullet trains, the least wonderful time of the year is back once again.  (Note to new Florida residents: the state Constitution once contained language simultaneously mandating and repealing the existence of Schrödinger’s bullet train. Welcome to Florida. Please follow evacuation orders.)

So, here we are. Hurricane season doesn’t spark joy, but we can’t get rid of it. And the problem of predicting overall Atlantic tropical cyclone activity is particularly knotty in 2019. Overall, if you view seasonal hurricane forecasting with skepticism: good. You should. Historical skill of such forecasts remains modest in early June, and methods that don’t offer some kind of rigorous and objective expected error interval are particularly questionable.

Still, more can be said about the season ahead now than in the spring, and model skill scores continue to rise significantly through the summer. The reason why this year is a challenging forecast is that May has been a month of rapid changes in key ocean and atmospheric patterns and weather extremes, both in the U.S. and globally. That means leading indicators we use to make prognostications in June are wildly divergent. The result is a broader-than-normal spread among forecast groups, ranging from expectations of a somewhat below to an above average season. 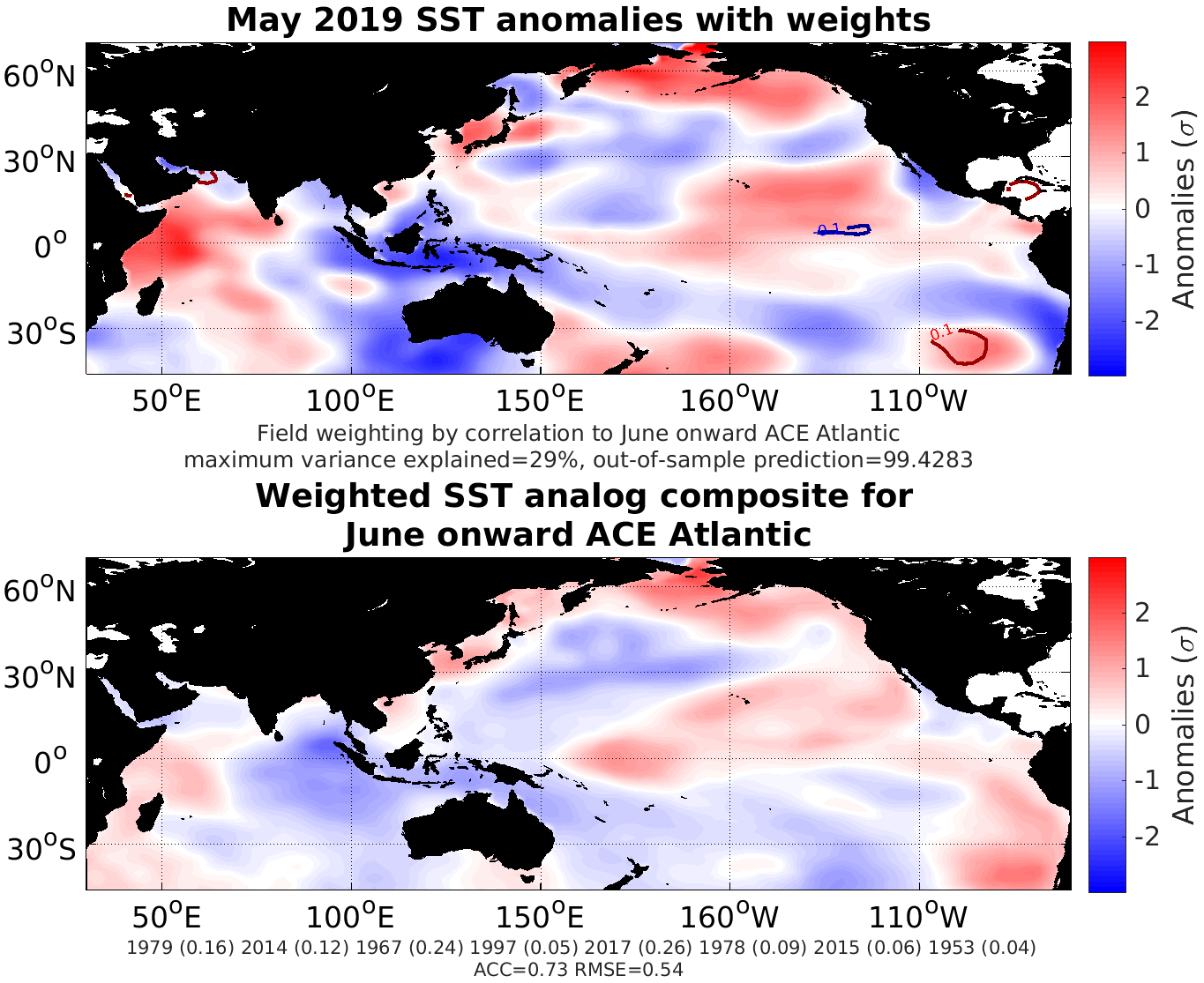 Let’s unpack some reasons why activity may or may not be elevated:

No: The Atlantic is relatively cool. Hurricanes are heat engines converting the potential energy locked in warm ocean waters into the kinetic energy of moving wind and water, explaining the strong historical relationship between elevated warmth in Deep Tropics and more Atlantic hurricane activity. Currently, the Tropical Atlantic south of 20°N is mostly cooler than normal and has been since winter. In fact, if a model was constructed just using current 0°-70°N Atlantic SSTs as inputs, it would return a forecast of around 70% of average hurricane activity for the season (example analog year: 2014). Of course, the same thing was true last May, and 2018 finished with 133% of normal activity and a Category 5 landfall. Another similarity to last year is that waters of the Subtropical latitudes are significantly warmer than average in early summer. More on that later.

No: Ongoing El Niño in the Pacific. This is a big one. NOAA officially declared El Niño conditions as existing in the Pacific starting in February, and a weak event has continued since then.  Historically, El Niños that persist into the summer and fall decrease Atlantic hurricane activity by promoting unfavorable wind shear in the western Atlantic. However, this effect is weaker when the warmest waters relative to normal are in the central Pacific, as they are this year. If a model was constructed just using current Pacific and Indian Ocean SSTs as inputs (at right), it would return a median forecast of exactly average Atlantic hurricane activity for the season. The outcomes within the analog set are far more disparate set than for the Atlantic SSTs, with hyperactive (2017) to inactive (2014) seasons, and everything in between. 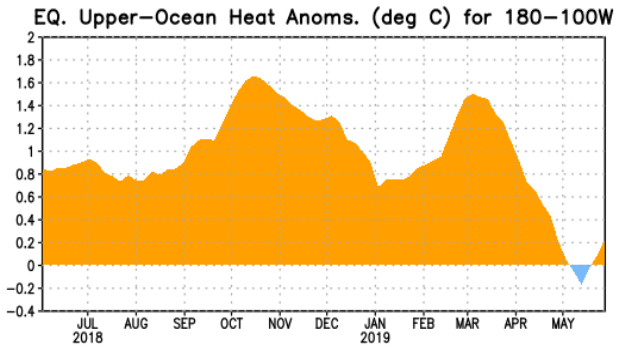 Yes: El Niño is weakening. On the other hand, the 2019 El Niño was never impressive, and has consistently struggled to sustain the canonical linkages between the ocean and atmospheric circulations that define a +ENSO event.  Lacking this feedback loop, warm waters near the Equator in the Pacific Ocean cooled in April and May. As shown at left, this cooling is even more dramatic just below the surface, with integrated warmth anomalies of the top layer of the ocean plunging from +1.5°C in March to near zero in early June.  As surface anomalies often follow changes in integrated sub-surface temperatures, this is an indication that that Central Pacific SST anomalies may cool over the summer; another is neutral state of the South Pacific Oscillation west of Chile. WeatherTiger’s specialized El Niño modeling system, the estimable “El Niño Whisperer,” has been consistently calling for a descent of Nino3.4 SST anomalies into neutral territory since early spring and continues to do so in its June run.

Yes: The Tropical Atlantic warmed in May. The “Main Development Region” stretching from the African coast to the western Caribbean has been persistently colder than average this spring, with a cool horseshoe arching towards Europe hinting at these conditions possibly persisting. However, the MDR warmed by half a degree in May, bringing the monthly mean close to normal. While the MDR has given up almost all of those gains in the first week of June, major volatility in Atlantic SST anomalies is indicative of overall pattern instability and the potential for addition flips as the season progresses. In 2018, cool MDR anomalies abruptly warmed towards neutral in mid-August, setting up a chaotic September in the Deep Tropics.

Yes: It has been a rainy spring in West Africa. Turning our attention to the rains down in Africa, the West African monsoon has been extremely robust over the last several months. A wetter Sahel means a less dusty eastern Atlantic in the heart of hurricane season, which may matter because African dust can hamper the development of westward-moving tropical waves, as well as potentially setting the stage for a warming of the MDR by August or September. This could be an indication of a more active African wave train that would be surmised simply by looking at Atlantic SSTs alone.

If you’ve followed any of our seasonal forecasts in the past, you know that WeatherTiger’s seasonal forecast algorithm likes to skate where the puck is going. Assimilating the above influences, our model weighs the May trends more heavily than current conditions, projecting total seasonal activity of around 120% of a typical year (120 ACE units), or around 15 tropical storms, 7 hurricanes, and 3 major hurricanes.

This is an increase from our April outlook of 105% of normal. There is a 50% chance of total activity falling between 70% and 170% of normal from backtesting this model, corresponding to odds of a below, near, and above average season of 30%, 30%, and 40%, respectively. Model skill relative to climatology since 1985 is about 15-25% at this lead, depending on the storm metric.

A final but important point: the current warmth in the Subtropical Atlantic is highly unusual. Exacerbated by recent extreme heat caused by powerful ridging over the Southeastern U.S., ocean temperatures across the Gulf and the southwestern Atlantic between Florida and the Carolinas are a blistering 3-6°F above normal. In the northeastern Gulf, anomalies of a similar magnitude last October were a key factor in Hurricane Michael’s gobsmacking intensification all the way to the moment of landfall.

The broader point is that if these anomalies persist, as they did in 2018, hurricane activity that ducks into the Subtropics could find very supportive energetic and wind shear conditions on approach to the U.S. coast. The strongest single match to the current Atlantic SST anomaly pattern from 20°S-70°N is May 1985, as shown at right. That season was slightly below normal in terms of overall activity (88 ACE), but a horrendous year for continental U.S. landfalls, including Hurricanes Danny, Elena, Gloria, Juan, and Kate. Storm impacts were particularly focused on the Gulf of Mexico. Our quantitative guidance for U.S. landfall activity gains skill over the next few months, and we’ll be issuing a forecast for total ACE occurring over the continental U.S. in our next outlook package later this summer.

For now, the bottom line is that based on objective guidance and qualitative observations this thing could still go either way; however, early summer trends are worrisome, and hurricane risks to the U.S. have generally increased since April.

All aboard the 2019 hurricane season, a high-speed train to an unknown destination. Keep watching the skies.

Dr. Ryan Truchelut is co-founder and chief meteorologist at WeatherTiger, a start-up providing customized seasonal forecast solutions and weather consulting for commodity markets, government, and private enterprise. Get in touch at ryan@weathertiger.com or find out more at weathertiger.com to find out how to put our trusted expertise to work for you. Click here to sign up for our Hurricane Forecasting subscription service to have all of WeatherTiger’s seasonal hurricane outlooks, weekly tropical video discussions (June-October), and individual storm forecasts sent right to your inbox as soon as they are released- still a great value at just $50/year!

This forecast may be downloaded as a PDF here, and is free to share with attribution.