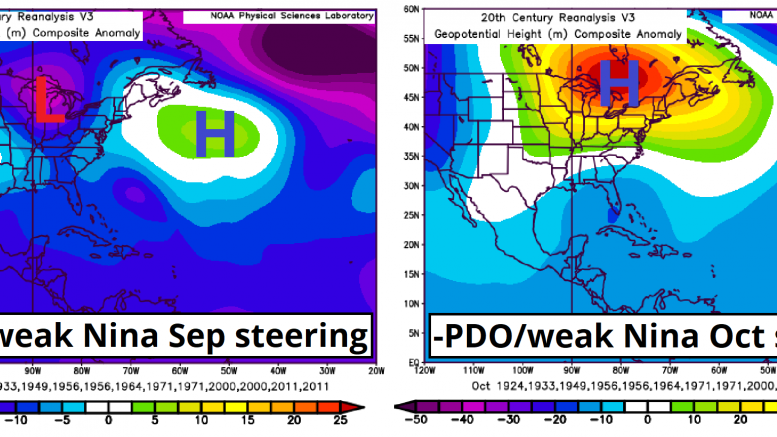 Every game of Tetris has a divergence point beyond which orderly shape stacking breaks down, and chaos holds illimitable dominion over all. Perhaps Cheeto dust has caused your thumbs to slip on the controller. Perhaps the 8-bit Russian (sorry, “Russian Olympic Committee”) music has become too stressful. Maybe the random number generator is broken.

And, just as Delta downgrades us all to Economy Minus, the incoming peak of hurricane season looks to further accelerate the divergent game of Tetris that is life in the Year of Our Lord 2021.

No small thing, this peak. While tropical storms occur over the entire June 1-November 30 span of the official hurricane season, Atlantic tropical activity is most concentrated in the late summer and early fall. Around 75% of annual Accumulated Cyclone Energy (ACE, a storm metric that scales with the the square of maximum winds) occurs between August 15th and October 15th. In Florida, that peak is shifted about a week later, and 75% of ACE occurring over Florida happens between roughly August 22nd and October 22nd.

As in Tetris, attempting to predict and manage the onslaught of the peak season comes down to lining up a few key pieces: namely, the L’s, and the blocks.

The focus of WeatherTiger’s previous seasonal hurricane outlooks in April, June, and July has been estimating how many of those mischievous spinning L’s are going to show up on Atlantic weather maps, and how strong they will be. While we initially were forecasting (and attempting to “The Secret” into existence) an average season, by early summer odds had shifted to favoring another above-normal year.

The latest run of our seasonal forecast model remains in-line with those raised expectations, with around 145 units of ACE the most likely outcome versus a climatological average of 100 ACE units. There is a 50% chance of 2021 total Atlantic activity landing in the 115-180 ACE unit, 17-21 named storm, 7-10 hurricane, and 3-5 major hurricane ranges. That corresponds to 5%, 25%, and 70% odds of below, near, or above normal hurricane seasons relative to what happened between 1971-2020.

This is an incremental adjustment higher to our forecast, inclusive of the 5 storms that have already occurred. The reason for this lack of change is that the key assumptions underpinning our June and July forecasts have played out as expected over summer.

The first key to the forecast is the likely re-development of La Niña conditions, or cooler than average waters in the central Equatorial Pacific through early fall. Updated projections including WeatherTiger’s own El Niño/La Niña model are in good agreement on a return of a weak La Niña in the next month or two. Atlantic seasons during a La Niña tend to be more active and stay busy deeper into the fall months as hurricane-hindering wind shear is reduced over the Caribbean and western Atlantic.

Additionally, after languishing in a slightly cooler than normal state through the summer, sea surface temperatures in the Atlantic’s Main Development Region between west Africa and the western Caribbean have warmed in recent weeks. Currently, the Deep Tropics are a little hotter than normal, and weak trade winds should extend this warming trend into the September seasonal peak.

Taken together, these June and July ocean and atmospheric conditions are good predictors of net seasonal activity, with forecast skill for August seasonal outlooks of approximately 40%. This means the expected error of our forecast is 40% less than simply forecasting average activity. Our August outlooks have been accurate over the last five years, including getting final 2020 Atlantic ACE (180) exactly right last year.

The Blocks: A Look at Potential Atlantic Steering Regimes

In August, it edges into realm of the possible to say something about where storms may develop and move in the upcoming months. This is an important distinction, as similarly active years can have wildly different land impacts. In 2004, there were nine total hurricanes and six U.S. hurricane landfalls; in 2010, twelve Atlantic hurricanes, zero U.S. landfalls.

So, what makes for a dangerous steering current regime? Well, it’s all about the blocks falling in the wrong places. For the two busiest months of Florida’s hurricane season, the aggregate locations of ridges of high pressure and troughs of low pressure aloft are shown for years in which major hurricanes struck the state. In September, major hurricane landfalls occurred in Florida when strong, persistent high-pressure set up over the Great Lakes, far western Atlantic, and eastern Canada. This “blocking” high pressure steered hurricanes west-northwest across the state and prevented northward turns east of Florida. In October, Florida’s major hurricane years usually have a block in eastern Canada as well, with the added twist of Southwest ridging and an undercutting upper low over the Midwest to steer hurricanes north out of the Caribbean and toward the Gulf Coast.

There are a couple of climate modes that make the development of these Western Atlantic blocking regimes more or less likely in the peak of the season. El Niño and La Niña certainly play a role, with other mid-latitude drivers like the Pacific Decadal Oscillation, ocean temperature anomalies along the Northeast Pacific coast, also having an influence.

If you read my dissertation (note: do not do this), you’ll find that cool phases of the Pacific Decadal Oscillation like the current one actually make mid-season Western Atlantic blocking of the kind favoring landfalls less likely. And, indeed, the historical Septembers with weak La Niñas and cold phase PDO tend to have a steering pattern close to the opposite of the averaged Florida landfall years, showing troughing over the east-central U.S., Central Atlantic ridging, and an open ocean escape route for Cape Verde hurricanes.

The flip side is that weak La Niña/cool PDO Octobers do tend to see high-latitude blocking develop over eastern North America. In fact, the weak La Niña/cool PDO October steering composite map is a close match for the steering currents observed in years in which Florida experienced a major hurricane in October, with ominously similar positioning of ridging and troughs.

Our algorithm takes these factors into account and projects an additional 5.5 units of ACE over the continental U.S. as the most likely outcome over the remainder of the season, for a total of around 9 units. From today, a normal season would be expected to have about 4 more units of U.S. ACE; the punishing 2020 season had about 10 more beyond mid-August, and 13.5 U.S. ACE units overall.

Translating for the back of the class: it’s not 2020 all over again (probably), but at least a couple of U.S. hurricane landfalls are more likely than not in 2021. Note that steering patterns are capricious, and landfall risk outlooks have very modest historical skill. Landfall risks are above normal for Florida in October, but only a fool would not be on guard for hurricane potential in August or September. Like Tetris, you never know what piece is going to show up next.

Indeed, the Atlantic is already perking up from an extended MJO-induced slumber, and Florida will need to watch the progress of several tropical waves moving west across the Caribbean over the next week for potential impacts heading into the traditional August 15th start of peak season.

Overall, it would surprise me to get through the next 10 weeks without at least a major scare for Florida. I strongly advise you to prepare your hurricane kits and plans right now, before the L’s are running amok and the blocks loom above.