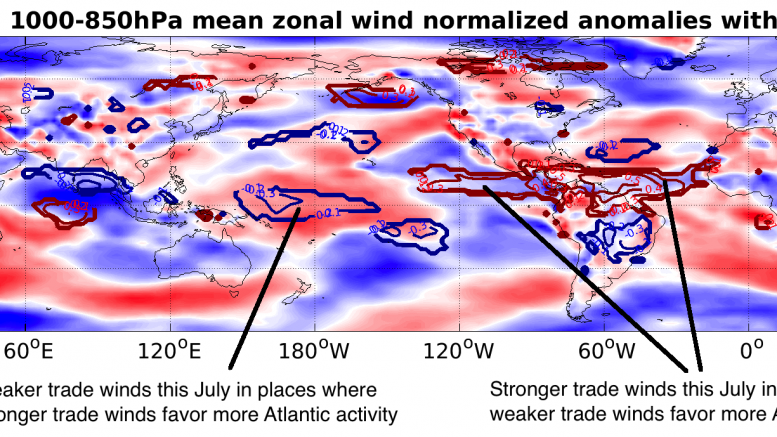 It’s a rare condition in this day and age to read any good news on the newspaper page, as the theme song of Full House, Family Matters, or perhaps both reminds us. And yet, despite the considerable folksy wisdom of the TGIF lineup, here’s a rare win for mankind: the odds of an active—or, at least, a hyperactive—hurricane season have (at least in our estimation) fallen in the past few weeks.

The highlight of WeatherTiger’s August update to our hurricane season outlook is that the most likely outcome for the 2019 hurricane season is total storm activity (Accumulated Cyclone Energy; ACE) of around 85-90% of average, or approximately 13 tropical storms, six hurricanes, and two major hurricanes. According to our prescription-strength predictive analytics, chances of this season winding up in the bottom, middle, and top thirds of all seasons since 1950 are about 40%, 40%, and 20%, respectively. We see a 50% chance of between 65-115 units of ACE over the season as a whole, as shown above.

This is modestly below the August outlook issued by Colorado State University of total storm activity of around 100% of normal, and further below NOAA’s official outlook for around 125% of average. Eagle-eyed readers may also note a step back from our own forecasts issued in April and June of this year which tilted slightly above average. SwimFan-level obsessives may even recall that a few weeks ago, I mentioned the odds of a more active peak of the season were rising. So, why the reversal? 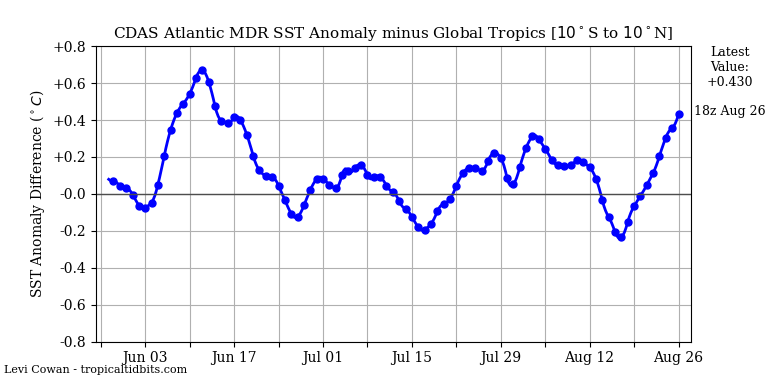 Essentially, the ocean and atmospheric conditions that influence how many hurricanes form have never been conducive to an active year. The Main Development Region (MDR) of the Tropical Atlantic has mostly been a little cooler than normal in the spring and summer, a shown above, with a weak El Niño hanging on in the central Pacific. Both of these, historically, are linked to quieter hurricane seasons. 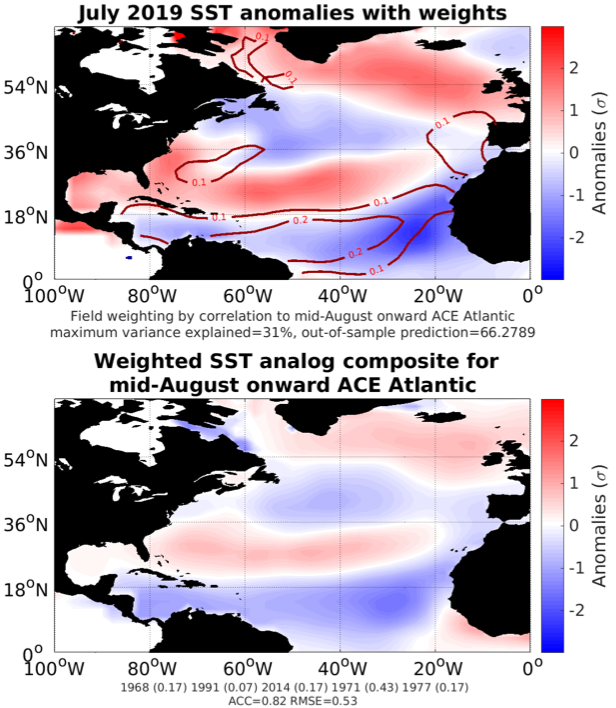 Our April and June forecast methodologies identified signals indicating these negative influences would potentially turn more favorable by the peak months of hurricane season. As of early August, while some of these predicted changes have occurred, others have not. It remains possible that the environment over the Atlantic will become more conducive for storms over the remainder of August; this is basically what happened in 2018, causing almost all seasonal forecasts, including ours, to whiff on the low side.

There is no sign that this change is underway, though, and the chance of a rapid shift prior to September is declining. Our August forecast effectively more heavily weights current vis-à-vis expected conditions, as this approach results in better seasonal forecast skill over the past several decades.

For instance, our algorithm identifies the warmer branch of the current, and odd, Atlantic rSST “quadripole” as being situated north of the area that historically covaries with subsequent Atlantic Basin ACE. Identifying the analog seasons that best matched Atlantic SST patterns in these co-varying regions in July, the top five matches (1968, 1971, 1977, 1991, and 2014) are all well below normal to normal seasons. Thus, our projected total Atlantic Accumulated Cyclone Energy is now down to 90 units from an early June forecast of 120 units, even as forecast skill doubles over those two months.

That said, this is a candy and nuts forecast, with ifs and buts aplenty.

One key prediction made by our modeling in the spring was the summer collapse of El Niño. On the surface, this was a good forecast; currently, sea surface temperature anomalies in the equatorial Central Pacific have been cooler than the El Niño threshold for about six weeks. 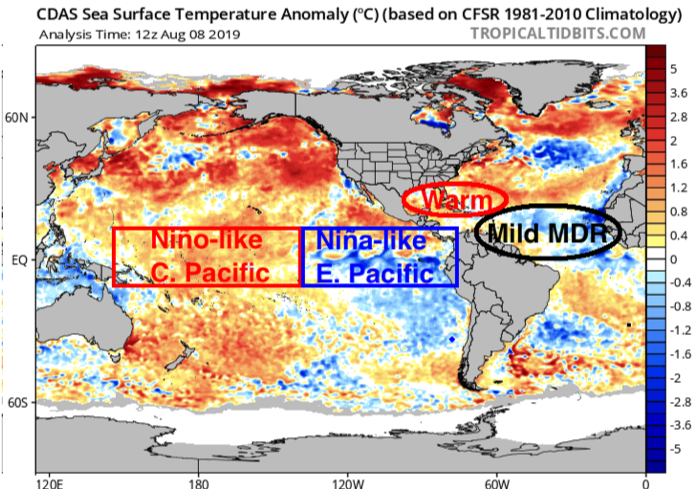 But: the unusual twist is that the western Pacific remains Niño-like, while the eastern Pacific is cold enough to nearly resemble a weak La Niña. This Pacific bipolarity contributed to extreme volatility in Northern Hemisphere weather patterns in July, including record-melting heat in Europe and notably cool conditions in the eastern and central U.S. On balance, Pacific conditions are no longer damaging Atlantic ACE expectations, but are now basically neutral, not positive.

This weather whiplash has had impacts on the evolution of the Tropical Atlantic as well. High-latitude blocking high pressure over the Northern Atlantic in the summer, seen over the past two weeks and likely to persist into mid-August, typically results in weaker easterly trade winds causing MDR warming.

But: recently, that high pressure has been so strong that it displaced the typical bands of winds circling the globe farther south than normal, keeping tropical trades unfavorably brisk and actually causing renewed cooling of the MDR in early August. This pattern has also flooded the Tropical Atlantic with dry, stable air, choking out any feints at development since mid-July.

Historically, these conditions more commonly precede hurricane activity over the rest of the season that is near or below normal. This signal is consistent between top oceanic and atmospheric predictors; July low-level trade wind strength is one of the better atmospheric predictors of August onward ACE, and as can be seen above, is fairly uniformly negative on both the Atlantic and Pacific sides this July.

In short, sizing up hurricane season 2019 can leave even experienced seasonal forecasters asking, “whatever happened to predictability?” With an abundance of unusual juxtapositions in the air and at sea, forecast confidence is lower than normal, but we see the odds of a much above normal hurricane season declining on balance since June.

As a note of caution, our analytical models focused on landfalling storm energy continue to predict near to incrementally above normal U.S. landfall risks. This is predominantly due to warmer waters close to the Gulf and Atlantic coastlines and potentially worrisome steering wind regimes in September and October, in which stronger than average ridging is favored over the western Atlantic and U.S. East Coast. Nothing in this forecast should be construed as a get out of jail free card for the continental U.S. this year.

Qualitatively, the odds of at least one more U.S. hurricane landfall in 2019 are around 75%, with the highest chances of a landfall along the Gulf Coast and somewhat diminished risks relative to normal in the mid-Atlantic and Northeastern U.S. With elevated forecast uncertainty going forward, we’ll certainly keep watching the skies, and recommend you do so as well.

Like what you read? Get every data- and science-driven WeatherTiger weekly tropical outlook and individual storm forecast direct to your inbox as soon as it is released. Sign up now for our tropical subscription package to get all of our expert, hype/drama-free forecasts sent straight to you, plus a free one-on-one consultation with Dr. Truchelut. You can also follow us on Twitter and Facebook for the latest as the 2019 season rolls on.