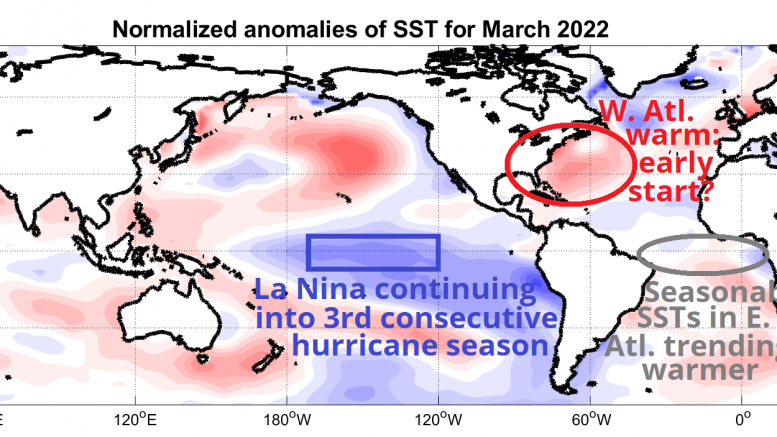 Enjoy this free sample of WeatherTiger’s comprehensive hurricane coverage. If you like what you read, sign up for WeatherTiger’s Hurricane Watch newsletter. Premium subscribers get Florida-focused daily tropical briefings, our weekly columns (June-October), full forecast and video coverage of hurricane threats, and expanded seasonal outlooks all for as little as $7.99 per month.

Mean reversion is the concept that over an extended time horizon, extreme events or rare streaks are balanced by more common outcomes. Sunshine follows rain. Shameful Wordle scores follow the braggable. Tails fails, despite what “they” say.

However, as mean reversion pertains to recent hurricane seasons, it is the immortal words of Judge Elihu Smails that apply. 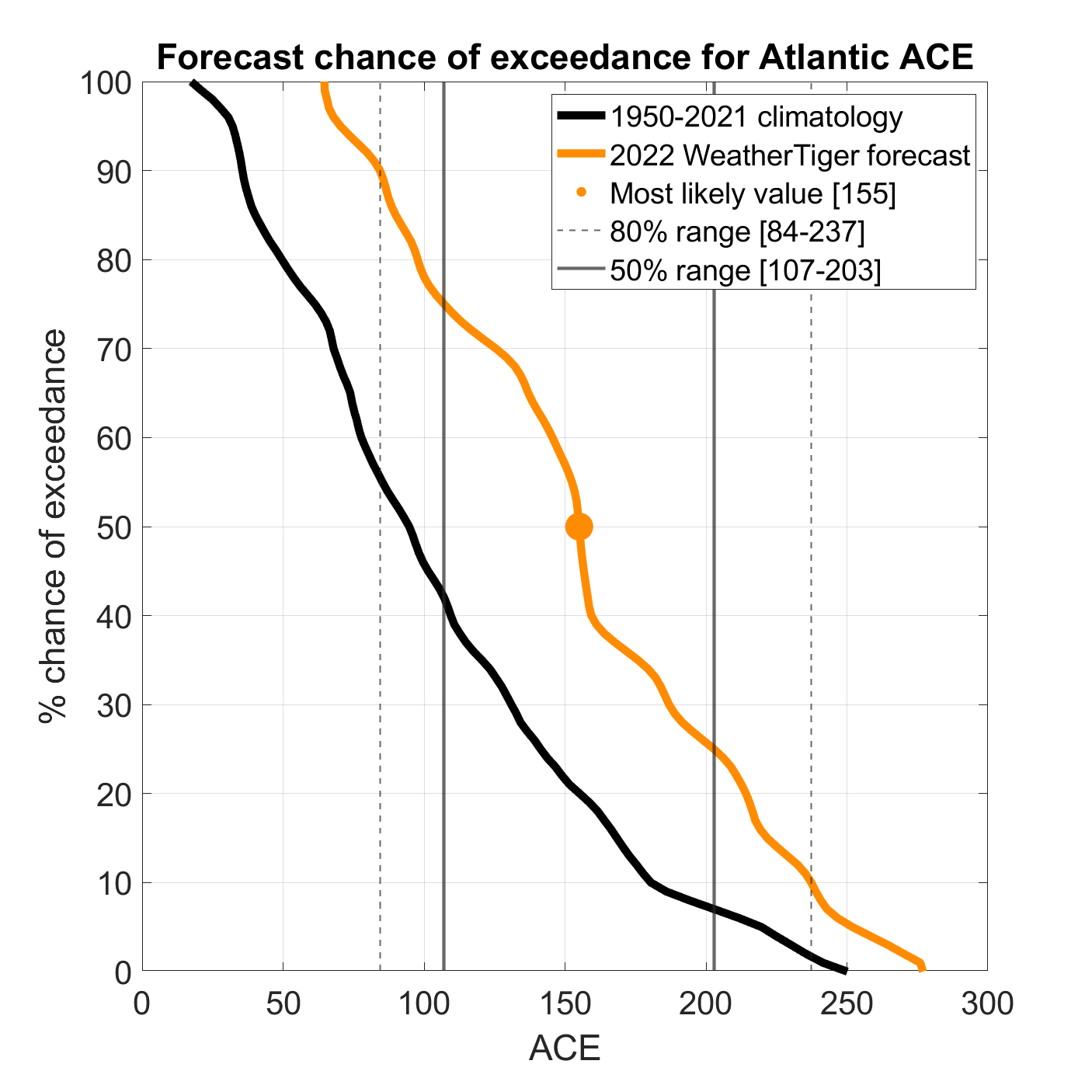 Well, we’re waiting. And we most likely will wait yet longer for anything approximating normal.

Each hurricane season since 2016 has registered above average activity, all landing in top third of years since 1950. A ludicrous 101 named systems over 2017-2021 have racked up the most accumulated cyclone energy (ACE) of any five-year period in hurricane climatology and brutally translated into 32 named storm, 15 hurricane, and 7 major hurricane landfalls on the continental U.S. coastline. In short, relentless tropical turmoil has been one of the three worst things about the last six years, along with the slow destruction of everything you love, and a lack of new music from “Weird Al” Yankovic.

WeatherTiger’s initial forecast for the 2022 Atlantic hurricane season offers limited hope of more typical threats in the year ahead. Our seasonal forecasting algorithm projects a most likely outcome of around 155% of average activity. Normal ACE is 100 over the last fifty years, so our forecast is for a most likely outcome of around 155 ACE units in 2022, or roughly halfway between the final tallies of 2020 and 2021.

Confidence sells, which is why there are no platinum rap albums titled “My Haters Make Some Valid Points.” Yet at the risk of undermining my alter-ego DJ Endle$$$hrimp, spring hurricane season outlooks are inherently uncertain. WeatherTiger’s April forecasts have demonstrated small but significant skill of 15-20% above climatology, as good as or better than other outlooks issued at this time of year. 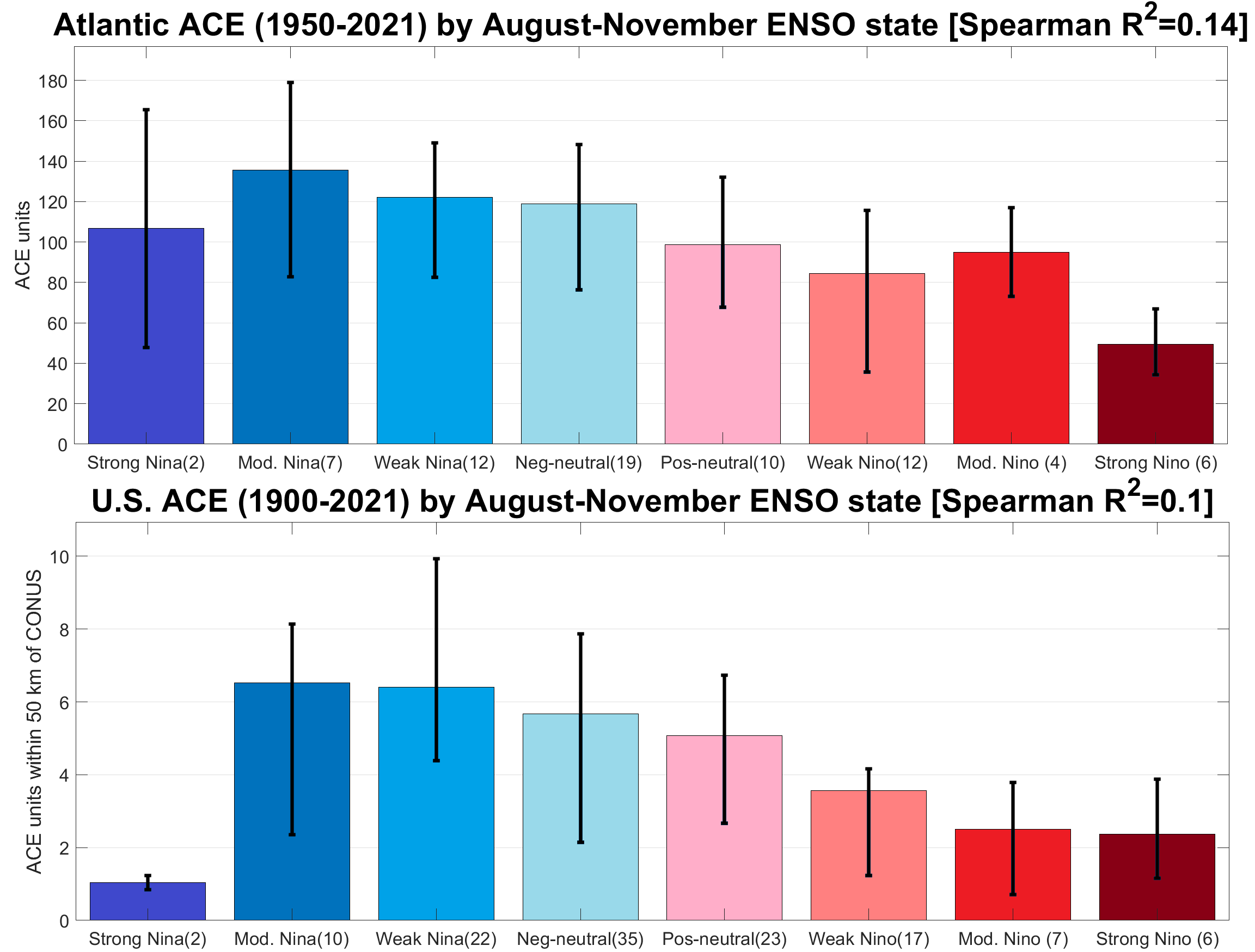 The primary source of this limited predictive power is the tendency of abnormally warm (El Niño) or cool (La Niña) waters in the equatorial Pacific, collectively known as the El Niño-Southern Oscillation (ENSO), to persist into the peak of hurricane season. Atlantic hurricane activity has a strong relationship with ENSO, as fall El Niños are linked to hurricane-weakening wind shear in the Atlantic. Thus, La Niña hurricane seasons average about 75% more ACE than El Niño years. The disparity is even more stark in terms of impacts, with La Niñas averaging over twice as much U.S. landfall activity as El Niños since 1900. Unfortunately, long-range projections of long-range ENSO conditions face a “predictability barrier” of diminished forecast skill in the spring. Sudden shifts in the Pacific are most common at this time of year, and have outsized, long-lasting implications for global weather patterns.

This year, a historically unusual moderate La Niña is the key to the forecast. La Niña events most often last one or two winters, with only three triple dips in the last 75 years, most recently when a 1998 Niña was also taking over for the ’99 and the 2000, like Cash Money Records. Earlier this year, the cold pool waned and it appeared the typical demise of a second-winter Niña was at hand; however, cool anomalies in the Pacific have since backed themselves up to around 1⁰C below normal, and La Niña is looking like a good bet for a third consecutive summer per WeatherTiger’s ENSO models. With no significant reserve of warmer water lurking below the surface of the Pacific, there is more confidence than usual in La Niña or at the very least cool-neutral conditions lasting into fall and setting up a busy Atlantic hurricane season.

Another spring outlook consideration, secondary to ENSO, is Atlantic water temperature anomalies. Historically, the strongest relationships between Atlantic warmth in spring and an active hurricane season are found between eastern Brazil and the Gold Coast. Warm spring waters there often migrate north into the Main Development Region from West Africa to Central America by the hurricane season’s peak, promoting more frequent development of tropical waves.

This spring, water temperatures in the equatorial eastern Atlantic are near normal. However, lower atmosphere temperatures in this region in March were mostly above average. This signals the presumptive start of a trend towards Atlantic SSTs warmer than average by summer, a pattern that has repeated several times in the six years. Fool me once, shame on me; fool me twice, won’t get fooled again.

Like last year, water temperatures are notably warmer than average across much of the subtropical Atlantic, especially north of the Bahamas and off the Southeast Coast. While the correlation of March ocean temperatures in this area with annual hurricane activity is weak, this western Atlantic warmth will may augur yet another early onset to hurricane season. Here again, reality has lapped the old norms, with seven consecutive years now featuring a named storm prior to the official start of the season on June 1. The National Hurricane Center will issue tropical outlooks each six hours starting on May 15, and a formal change to the bounds of hurricane season may follow in a few years. More on that in a future column.

For the last half-decade and change, the U.S. coast has endured a woebegone regime in which the Gulf landfalls are strong, the first storms are early, and the hurricane seasons are all above average. Time will tell when mean reversion grants us a well-earned reprieve, and there’s still a 30% chance it could be this year. However, given an unshakeable La Niña, Atlantic warmth, and the general vibe of Will2k+22 so far, I’m not summoning the effort for optimism.

Updates will also be issued as needed If there is a U.S. threat prior to the official start of the season, otherwise we’ll be back with a new seasonal outlook around June 1st. Until then, keep watching the skies.

Dr. Ryan Truchelut is co-founder and chief meteorologist at WeatherTiger, a start-up providing customized seasonal forecast solutions and weather consulting for commodity markets, government, and private enterprise. Get in touch at ryan@weathertiger.com or find out more at weathertiger.com to find out how to put our trusted expertise to work for you. Click here to sign up for WeatherTiger’s Hurricane Watch newsletter on Substack. You’ll get Florida-focused daily tropical briefings, our weekly columns (June-October), full forecast and video coverage of hurricane threats, and expanded seasonal outlooks as soon as they are written.