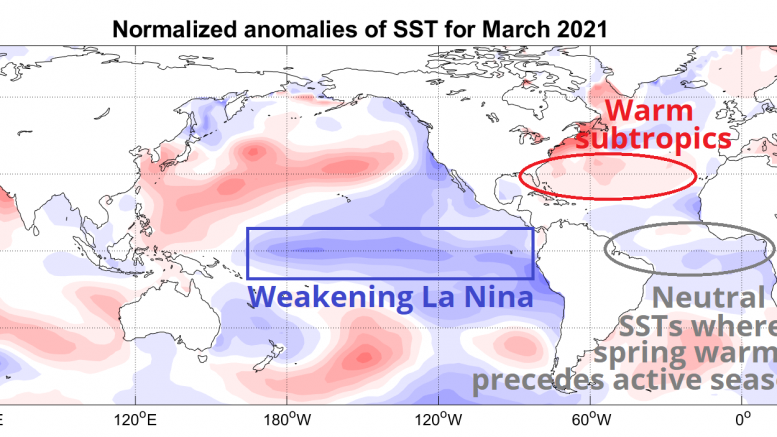 Enjoy this free sample of WeatherTiger’s comprehensive hurricane coverage. If you like what you read, sign up for WeatherTiger’s Hurricane Watch newsletter on Substack. You’ll get Florida-focused daily tropical briefings, our weekly columns (June-October), full forecast and video coverage of hurricane threats, and expanded seasonal outlooks as soon as they are written.

Many epithets, some printable, apply to the hurricane seasons of the past 14 years. Punishing. Exhausting. Wine-dark. For a few forgotten years in the early 2010s, mercifully dull.

Yet, one descriptor has not applied to a solitary season since 2007. 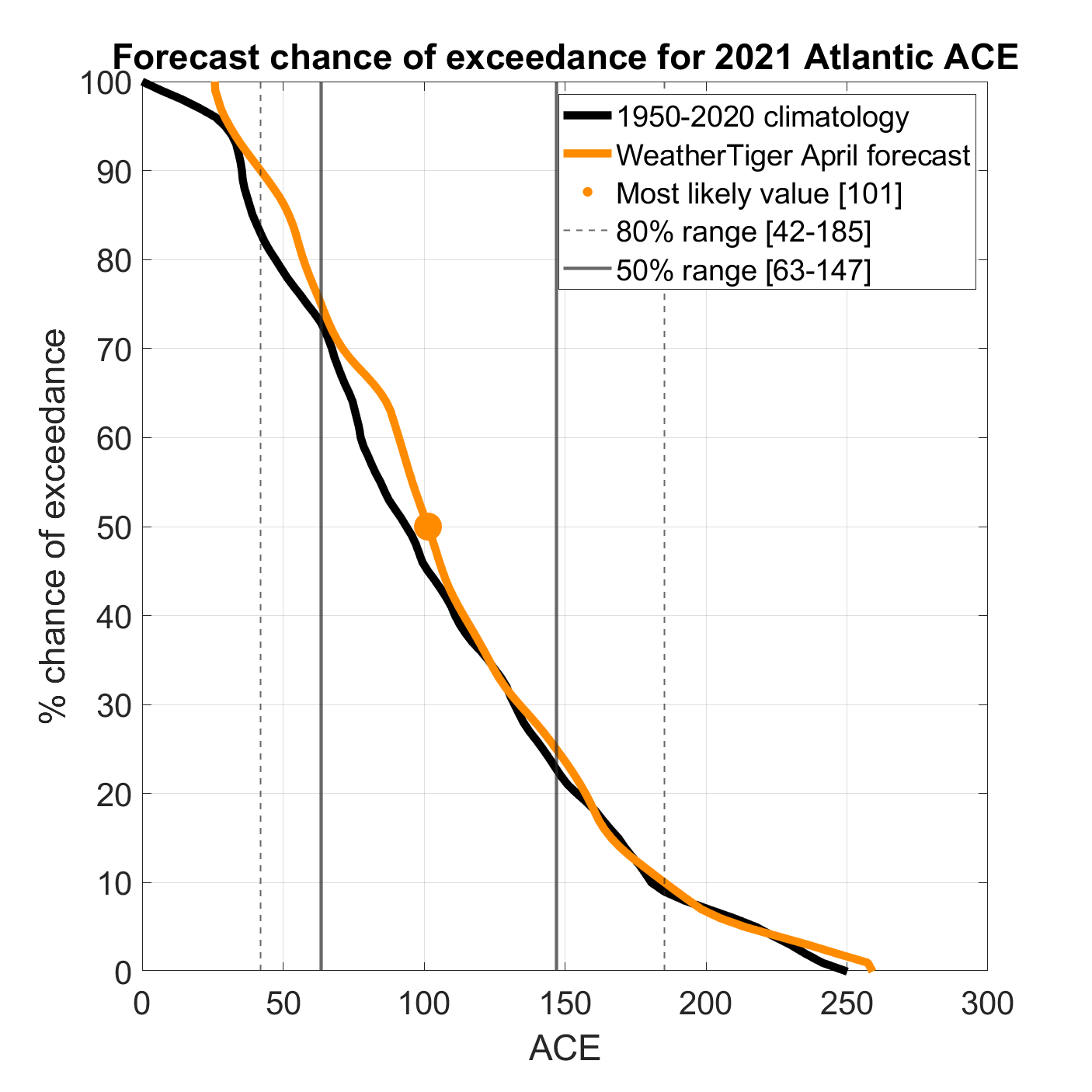 It’s been a bimodal decade-plus of immoderation since Benjamin Franklin Gates last collected national treasure and closed the Book of Secrets. The Atlantic hurricane season registered overall activity exceeding 125% of long-term norms in ten of those years; the other four lagged more than 35% below average. One-third of seasons usually fall into that missing median tercile.

For the last five years, not only did the center not hold, but mere anarchy has been loosed upon the Atlantic. Each season has been above average, and 2016-2020 is the second most active five years on record after 2001-2005. If you have wisely eternal sunshined 2020 out of your mind, you expunged a pummeling hurricane season featuring a record 30 named storms and 13 continental U.S. landfalls.

After 14 consecutive years of abnormal tropical weather and one consecutive year of unstable toilet paper supplies, we could all use a little normal right now. WeatherTiger’s initial forecast for the 2021 Atlantic hurricane season offers the hope of more typical tropical risks in the year ahead. Our seasonal forecasting algorithm projects a most likely outcome of around 100% of average activity, with the estimated odds of a below normal, normal, or above normal season at about 30%, 35-40%, and 30-35%, respectively. The 1971-2020 average accumulated cyclone energy (ACE) is 100, so our forecast of normal corresponds to a most likely outcome of 100 ACE units this year.

That means a 50% chance of ending the year in the ranges of 65-145 ACE units, 13-18 tropical storms, 5-8 hurricanes, and 2-4 major hurricanes. Our forecast numbers carefully calibrate oceanic and atmospheric leading indicators, but even so, April forecasts only manage back-tested skill of 15% over simply guessing a long-term average. Translation: we could be wrong. 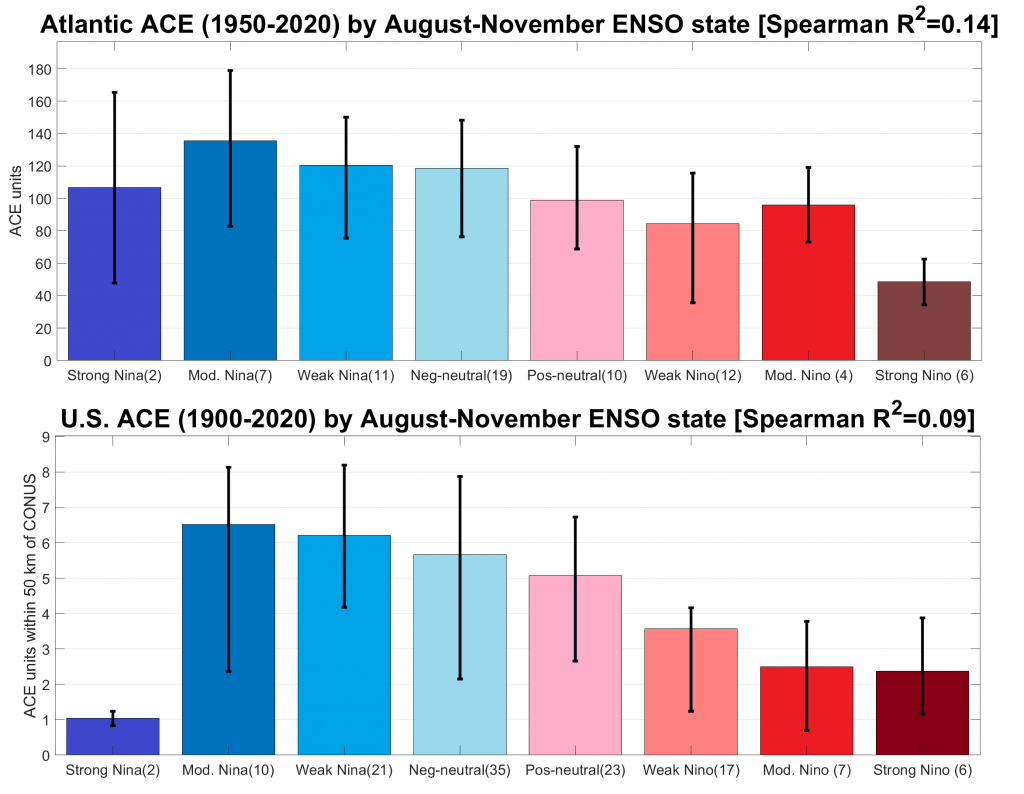 The first forecast key is whether warm El Niño, cool La Niña, or neutral ocean temperature anomalies in the equatorial Pacific (collectively El Niño-Southern Oscillation, or ENSO)  will coincide with the peak of hurricane season. Projections of long-range ENSO conditions face a “predictability barrier” of diminished forecast skill in the spring. Sudden shifts in the Pacific are most common at this time of year, and have outsized, long-lasting implications for global weather patterns. 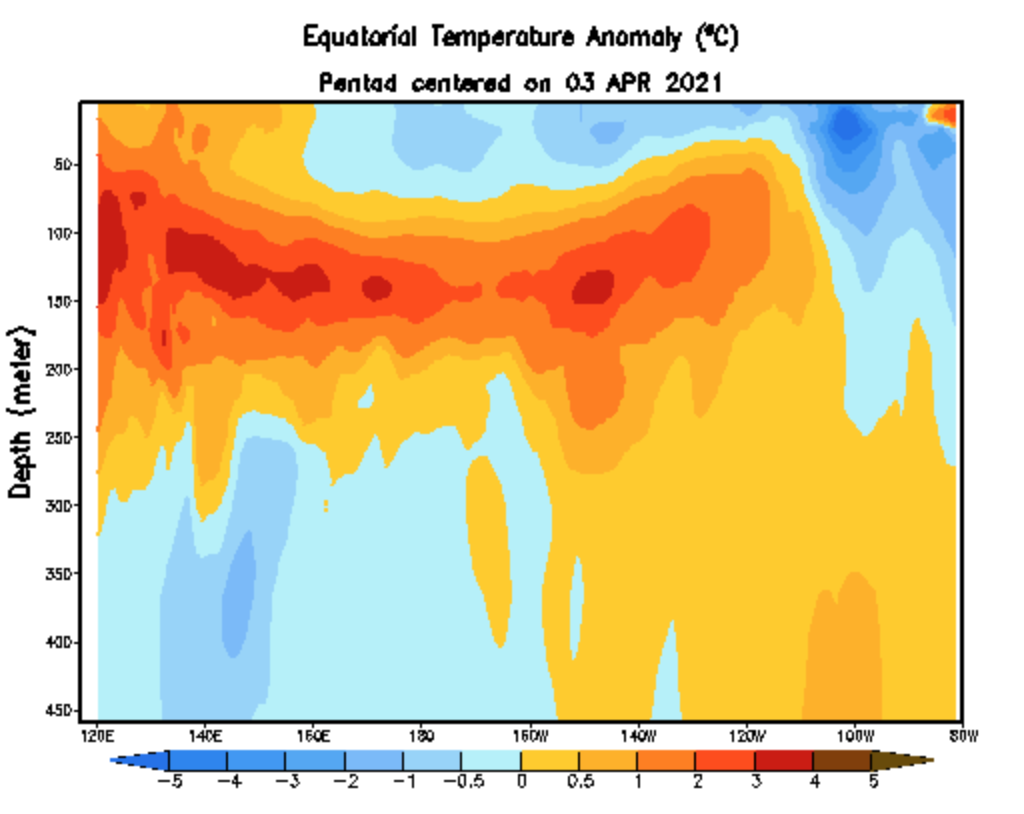 Atlantic hurricane activity has a historical relationship with ENSO, as fall El Niños are linked to hurricane-weakening wind shear in the Atlantic during the peak of the season. This makes a substantial difference, as even weak La Niña years average hurricane activity 25% above normal, while weak El Niño years average 20% below normal. The disparity is even more stark in terms of landfalls, with La Niñas averaging twice as much tropical activity over the continental U.S. as El Niños since 1900.

A weak La Niña is ongoing but stumbling into spring, and the return of more neutral conditions in the Pacific is expected by May. From there, almost all possibilities remain, well, possible. A neutral ENSO state, perhaps with a continued cool tilt, is most likely to stay in place through the peak months of hurricane season. However, some similar years have double-dipped back into weak La Niñas in the fall, which would juice the back half of the season.

On the other hand, a reservoir of warmer water is developing just beneath the surface of the equatorial Pacific, and an upcoming weakening or reversal of Pacific trade winds could allow those warmer waters to rise. There is some chance of a weak El Niño developing by early summer, though this scenario is not favored. Overall, other than noting strong El Niño conditions are unlikely, the ENSO forecast input is basically a push at this stage. We will have a much better guess about fall ENSO trajectory by early June. 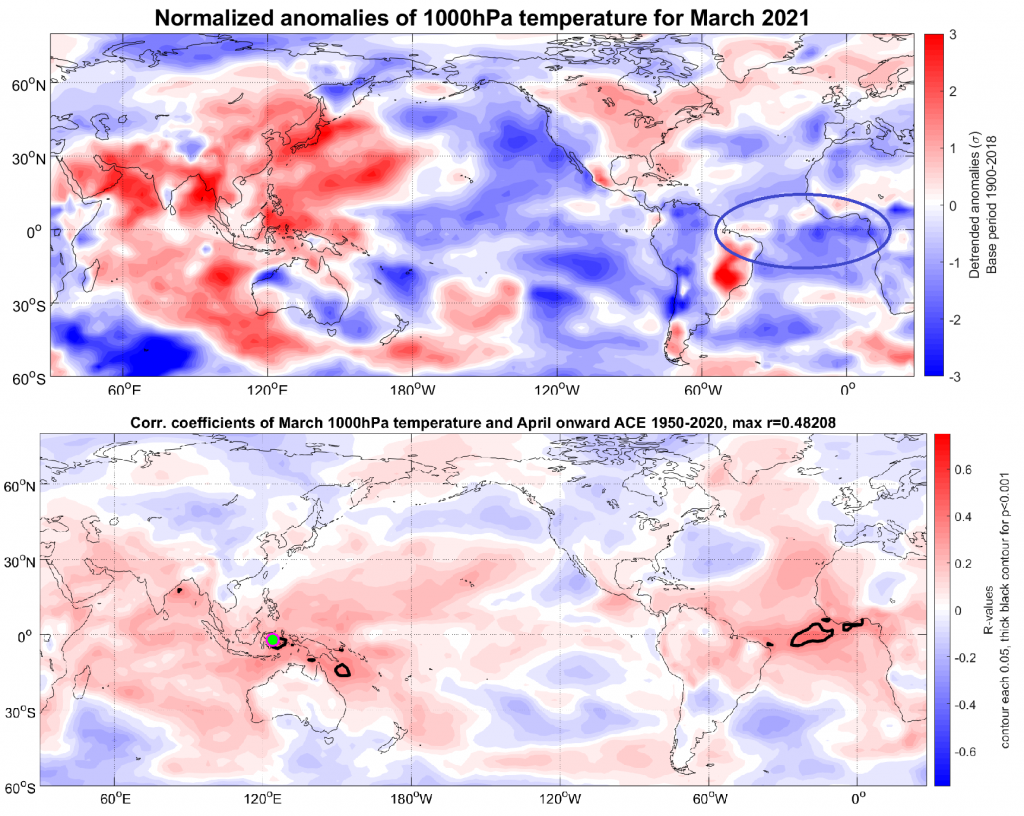 The second key is Atlantic temperature anomalies. Historically, the strongest relationships between Atlantic warmth in early spring and an active hurricane season are found between eastern Brazil and West Africa’s Gold Coast. Warmer spring waters there typically migrate north by the hurricane season’s peak and catalyze the development of west-moving tropical waves. 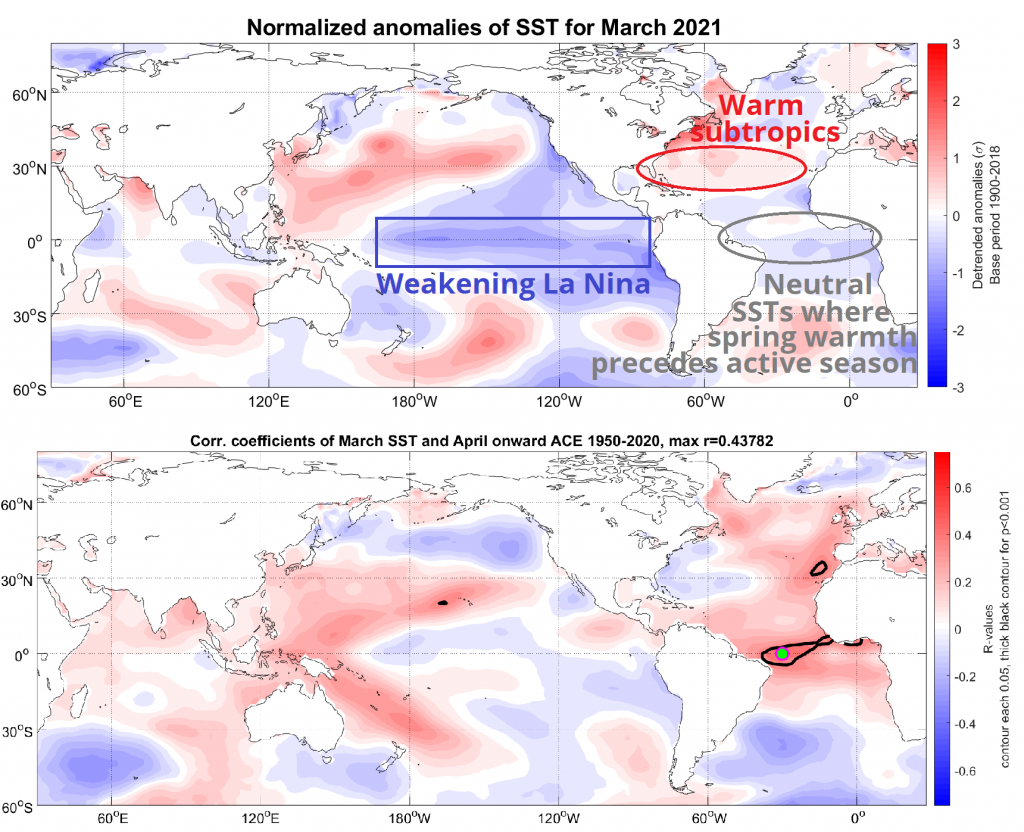 This spring, water and air temperatures in the equatorial eastern Atlantic are near or slightly below normal. While this could change heading into summer, as has happened several times in the last decade, for the moment the configuration of Atlantic sea surface temperatures is not alarming and does not strongly signal either an active or inactive season ahead.

Water temperatures are notably warmer than average across much of the subtropical Atlantic, including the eastern Gulf of Mexico and north of the Bahamas. This factors more heavily into predictions for an active season issued by other respected forecast groups, including Colorado State University. However, the correlation of March ocean temperatures in the subtropical Atlantic and Gulf with annual hurricane activity is relatively weak since 1950, so WeatherTiger’s model weights this consideration more lightly. All seasonal forecasts, including ours, can be viewed together here. While WeatherTiger’s forecast is on the less active edge of the forecasts currently issued, it should be noted that no forecast model has much predictive skill at this lead time.

However, this western Atlantic warmth is likely to lead to yet another early start to hurricane season. In deference to the seven May storms requiring U.S. watches or warnings since 2012, the National Hurricane Center will now issue routine tropical outlooks each six hours starting on May 15. This could well be a prelude to moving the official start of the hurricane season from June 1. More on that later.

Normal has again proven elusive in 2021, as Don Pablo’s stock has a higher market cap than all utilities combined despite having zero restaurants and no longer being a company. And yet, hope, the thing with feathers, remains. The hope of ample bathroom tissue. The hope of National Tr3asure, featuring a scenery-chewing, paycheck-cashing Nic Cage.  My hope I don’t spend another year primarily arguing with toddlers about whether you should eat Play-Doh off a shoe. And not least, the hope that neutral ENSO conditions and a lukewarm tropical Atlantic will keep hurricane activity to a reasonable volume this year. We shall see.

We’ll be back with an updated seasonal forecast around June 1st. Until then, keep watching the skies.

Dr. Ryan Truchelut is co-founder and chief meteorologist at WeatherTiger, a start-up providing customized seasonal forecast solutions and weather consulting for commodity markets, government, and private enterprise. Get in touch at ryan@weathertiger.com or find out more at weathertiger.com to find out how to put our trusted expertise to work for you. Click here to sign up for WeatherTiger’s Hurricane Watch newsletter on Substack. You’ll get Florida-focused daily tropical briefings, our weekly columns (June-October), full forecast and video coverage of hurricane threats, and expanded seasonal outlooks as soon as they are written.