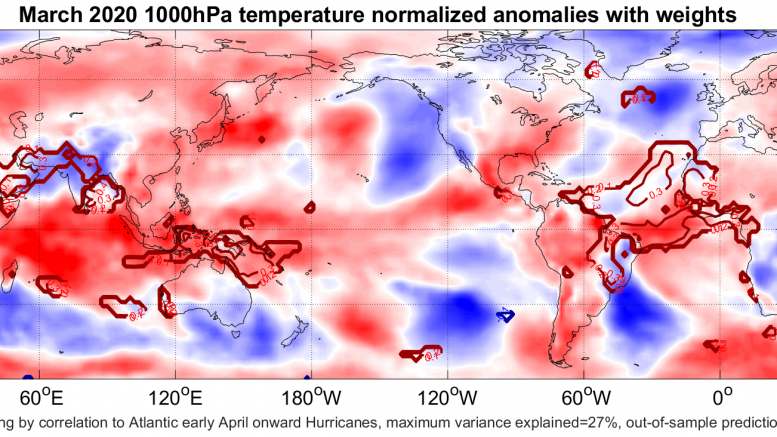 Enjoy this free sample of WeatherTiger’s comprehensive hurricane coverage! If you like what you read, click here to sign up for our Hurricane Forecasting subscription service to have all of WeatherTiger’s seasonal hurricane outlooks, weekly tropical columns and video discussions (June-October), and individual storm forecasts sent right to your inbox as soon as they are released, a great value at just $50/year.

“Will the U.S. again be disproportionately fortunate in the 2020s? I wouldn’t bet on it.”

These were the closing remarks of WeatherTiger’s wrap-up of the hurricane seasons of the 2010s, written in that lost horizon of December 2019.

Four months later, the U.S. (checks notes) has not been disproportionately fortunate in the 2020s. Rather, we are facing the decade’s first hurricane season from the middle of SARS Wars: Epidemic II— Attack of the Corones, and everyone knows the middle is the worst part of the second one. Unfortunately, WeatherTiger’s initial look ahead to hurricane season finds 2020 relentlessly on-brand, with an above-average year in the Tropics looming.

The official June 1st start of the season is less than two months away, and several groups have released hurricane projections in the last two weeks. These forecasts, including ours, can be compared at seasonalhurricanepredictions.org, which will compile all updated predictions through August.

Our model output joins an early consensus of forecasters, including those at Colorado State University, in showing elevated odds of Atlantic hurricane activity in the upper third of seasons since 1950. WeatherTiger’s proprietary algorithm projects a most likely outcome of around 145% of average activity, or 16 tropical storms, eight hurricanes and four major hurricanes. The 50% expected error ranges for those metrics are 75-200% of normal activity, 13-20 tropical storms, 7-10 hurricanes, and 3-5 major hurricanes.

Our forecast numbers are based on careful calibration of oceanic and atmospheric leading indicators, but even so, the April forecasts only manage backtested skill of 15% over guessing a historical average. There is a large uncertainty interval around this projection, and we estimate the odds of a below normal, normal, and above normal season in 2020 to be about 20%, 30%, and 50%, respectively.

Issuing seasonal outlooks in the spring is particularly fraught, with the skill of the forecast mostly derived from eliminating unlikely scenarios. This in mind, there are two keys to our outlook that both augur poorly, with a bonus third factor that looks scary but is not yet meaningful.

The first key is whether summer and fall will have an El Niño (warm), La Niña (cool), or neutral configuration of water temperatures in the Equatorial Pacific.  Spring projections of Pacific conditions face a “predictability barrier” of diminished long-range forecast skill due to sudden shifts at this time of year having outsized, long-lasting implications for global weather patterns. El Niños are linked with hurricane-weakening wind shear in the Atlantic; the converse is true for La Niña years. This makes a substantial difference, as even weak La Niña years average 25% above normal Atlantic hurricane activity, while weak El Niño years average 20% below normal.

Currently, the Pacific remains in a warm-neutral hangover following a weak El Niño event in early 2019. Our model is picking up on indications, including cooling waters below the surface and conducive low-level winds, suggesting a La Niña event will slowly take shape over the next 3-5 months. This favors a busy season, particularly from September onward. Importantly, the negligible chance of a potent El Niño eliminates many of the ways that well below average Atlantic hurricane seasons come to pass.

The second factor of concern is the configuration of Atlantic temperature anomalies. Historically, the strongest relationship between warmth in early spring and an active hurricane season is in the eastern Atlantic between Brazil and West Africa, as warmer anomalies there often migrate into the Main Development Region by the season’s peak and catalyze the development of passing tropical waves.

This year, both water temperatures and near-surface air temperatures in this key region are far above normal. While this could change before summer, the relationship between east Atlantic spring temperatures and seasonal hurricane activity is statistically significant since 1950. Near-surface temperature anomalies are particularly well-correlated this spring with the regions in the Equatorial Atlantic that are historically the best leading indicators for above normal hurricane seasons. In fact, the top analog for March 1000-hPa temperature anomalies globally is 2005, which was of course a hyperactive Atlantic season. While this is not a forecast for a 2005-like season, together with the rising probability of La Niña, Atlantic SSTs also signal elevated chances of a busy year at this stage.

Finally, there’s buzz about extreme warmth in the Gulf of Mexico, where water temperatures are three to five degrees above normal courtesy of a pathetic winter. The good news is there is no relationship between March and April Gulf temperatures and annual hurricane activity, mainly because Gulf deviations can change quickly when weather patterns shift. Such anomalies persisting into July would be deeply unnerving. In the meantime, they are likely to juice spring severe weather threats in the Southeast and could increase chances of early season tropical activity in May or June.

Hurricane season approaches with Earth already suffering a worldwide Cat 5. We don’t know if we’re muted or unmuted. We don’t know the next time we’ll eat at a buffet. The Federal Reserve is monetizing ShowBiz Pizza prize tickets. While I am not epidemiologist or emergency manager, it is clear the risk calculus of how we respond to hurricane threats will shift in 2020, with even more of a premium on wise planning, early warning, and quick reaction. WeatherTiger will be back to update our seasonal forecast numbers in early June, and with you every step of the way through the season.

In closing, every other season is cancelled, but early evidence suggests that hurricane season may lack the basic decency to follow suit. Stay indoors, and keep watching the skies.

Dr. Ryan Truchelut is co-founder and chief meteorologist at WeatherTiger, a start-up providing customized seasonal forecast solutions and weather consulting for commodity markets, government, and private enterprise. Get in touch at ryan@weathertiger.com or find out more at weathertiger.com to find out how to put our trusted expertise to work for you. Click here to sign up for our Hurricane Forecasting subscription service to have all of WeatherTiger’s seasonal hurricane outlooks, weekly tropical columns and video discussions (June-October), and individual storm forecasts sent right to your inbox as soon as they are released- still a great value at just $50/year!