Prequel: A Brief Note on my Seasonal Forecasting Philosophy

After two very calm hurricane seasons in a row, things are feeling a little stagnant in the Atlantic Basin. Nevertheless, the prospect of renewal is in the air. Cult favorite supernatural dramas The X-Files, Twin Peaks, and Coach are coming back to TV. Full House is remodeling into Fuller House. Frasier will be scrambling additional eggs as Frasiest. Serial is returning to NPR to follow Adnan Syed’s impending marriage to Taylor Swift. In this age of willy-nilly rebootery, will the 2015 hurricane season be the most costly reboot of them all?

This year’s forecast will once again focus on predicting the risks of tropical cyclone landfalls rather than the number of developing storms. The reason for this is because, as shown by the leftmost set of bars in the figure below, the number of storms that develop explains only about 25% of the variability in U.S. landfalls, with genesis location and steering currents accounting for the other 75%. As shown at left by the middle set of bars, traditional forecasting methods like average May SST anomalies do correlate well with seasonal tropical cyclone activity in the Atlantic Basin. However, as shown by the rightmost set of bars, May SST anomalies do not correlate significantly with what we actually care about— how many tropical cyclones will strike the United States coastline in the upcoming year. To put it another way, even if we knew exactly how many storms were going to form in a season ahead of time, there would still be a huge amount of uncertainty in how many storms would make landfall.

For that reason, the rest of this forecast will justify and present the odds of U.S. hurricane landfall in the upcoming 2015 season. As my entry in the TC activity parlor game, I expect approximately 8 tropical storms, 4 hurricanes, and 1 major hurricane this year. These numbers are below average and reflect below normal SSTs in the Atlantic and recent trends toward a powerful El Nino.

The Rise of El Nino: A Quantitative Assessment of U.S. Hurricane Landfall Risks 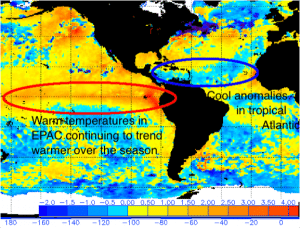 As a count-oriented approach to seasonal TC forecasting is somewhat useless, a better method is to focus on predicting the favorable steering currents and environmental conditions that bring storms towards the United States. ENSO plays a major role in modulating these patterns. Basically, a warmer than normal equatorial Eastern Pacific Ocean (El Nino) is negatively correlated with U.S. landfall activity due to enhancement of destructive vertical wind shear over the western Atlantic Basin. In strong El Nino events (or those represented by Chris Farley in sequins), this shear is overwhelming. 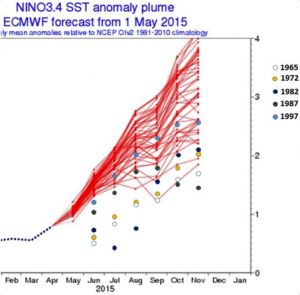 Based on current conditions and forecast trends, the 2015 hurricane season is, in fact, likely to be overwhelmed by a very powerful El Nino event. In the past three months, several westerly wind bursts in the Pacific have caused warmer than average subsurface anomalies to rise, resulting in the moderate El Nino observed today (at left). Over the past month, the rate of warming has accelerated dramatically, and new model data (at right) now suggest significant additional warming over the next several months. In fact, the European model ensemble mean projects a stronger El Nino by fall than any previous first-year El Nino, including the 1997 record-setting event. While other considerations are more important in the absence of a strong El Nino (and the cooler than average waters of the tropical Atlantic are not indicative of elevated landfall activity), the best way to understand 2015 historically is to study other very strong El Nino years: namely, 1902, 1905, 1930, 1965, 1972, 1982, 1987, and 1997. As shown at left below, when compared to the average season over 1900-2014 (solid lines), this set of eight El Nino (dashed lines) years averages far fewer U.S. tropical storm and hurricane landfalls over the course of the season. It should also be noted that only one major hurricane made U.S. landfall during the strong El Nino years, Hurricane Betsy in 1965. 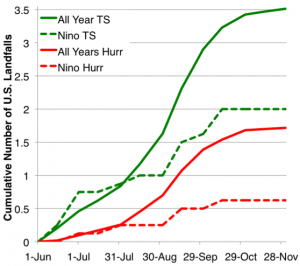 However, this plot also shows that the incidence of U.S. landfalls in the first third of the season, June-July, actually runs near or even slightly above average, so one or more (weak/Gulf Coast) landfalls are a reasonable possibility over the next eight weeks. Still, the composite steering pattern for these eight years in the core three months of the season, August-October, as seen above right, reveals a strong inclination for East Coast troughing. 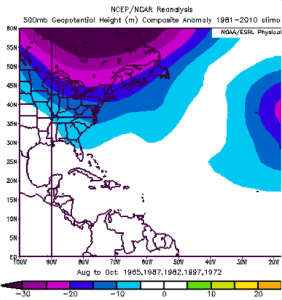 This general pattern puts the east coast of Florida and the Northeast at well below normal risks of hurricane landfall. The Carolinas are also at below average risk, but not quite as reduced as the regions to its north and south due to the potential for systems to brush past the Outer Banks as they move to the northeast, as was the case with Tropical Storm Ana in May.

The inputs of a strong El Nino event and a tendency for East Coast troughing during the peak season can be synthesized into an objective statistical model of landfall risk to the U.S. coastline. This model is run for all U.S. tropical cyclone landfalls (top right), hurricane landfalls (middle), and major hurricane landfalls (bottom), with the output expressed as the percentage chance of the specified number of landfall events occurring this year. Historical chances derived from the climatological record of landfalls are also given, and the model’s odds are shown in green when they are meaningfully higher than climatology and red when they are lower. Note that the tropical storm landfall forecast includes Ana. 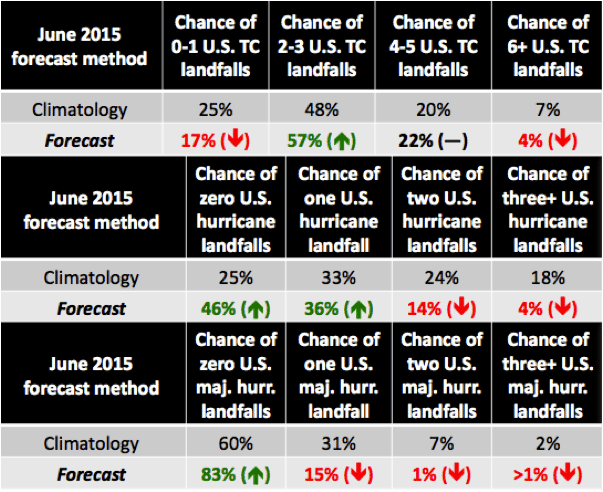 As an example, this table shows that there is a roughly 85% chance that there will not be a major hurricane landfall on the U.S. coastline this year, which is higher than the 60% chance one might expect in an “average” season, but is consistent with the one major hurricane strike in the eight strong El Nino years. In general, this model consistently predicts well below average risks of U.S. landfalls this year, with the shift toward lower levels of landfall risk increasing with intensity. Still, while a U.S. major hurricane landfall is significantly less probable than usual this year, it remains more likely than not that one or two more tropical storms will come ashore somewhere in 2015, with a hurricane strike roughly a 50/50 proposition (though my personal guess would be no).

Finally, while noisy data makes quantitative estimates of regional U.S. tropical cyclone risk unfeasible, a categorical classification of landfall chances relative to climatology in four broad zones is shown above. As indicated, landfall risk along the Gulf Coast and Carolinas is below normal for tropical storms and hurricanes (and well below average for major hurricanes), and well below average in all categories over the rest of the East Coast.

Regular Booted: The Bottom Line for the 2015 Hurricane Season

The 2015 hurricane season has been mostly written off in some quarters, which from both a subjective and objective perspective, appears to be mostly justified. The Equatorial Pacific is building towards strong El Nino conditions, which have been historically associated with well below normal U.S. landfall activity, particularly for major hurricanes. My proprietary model and historical analysis are in good agreement that the limited landfall activity expected this year is most likely to come earlier in the season, perhaps somewhere along the Gulf Coast. As ever, one should keep an eye out, but the 2015 season looks to again be a forgettable and quiet one. Of course, even though this season may be preemptively cancelled, perhaps next year will be the one in which classic characters like Alex, Bonnie, Danielle, and Earl are vigorously rebooted by Netflix, Yahoo, Altavista, Pets.com, or Bonzi Buddy, and/or released direct-to-smartwatch, -airplane, -GTE Airfone, or –Gadzorp as a series of co-branded, fully integrated Vines. Or something! Who knows what buzzwords or hurricanes 2016 may bring.

Like WeatherTiger's tropical coverage? What if I told you... you could get it in your inbox? Get every data- and science-driven WeatherTiger weekly tropical outlook and individual storm forecast for the 2019 hurricane season as soon as it is released. Sign up now for our tropical subscription package to get all our forecasts sent straight to you, plus FREE one-on-one consultation with Dr. Ryan Truchelut!