NEAR NORMAL SEASON EXPECTED IN ATLANTIC BASIN DESPITE DEVELOPING EL NINO, WITH SOMEWHAT BELOW AVERAGE RISKS OF U.S. LANDFALLS…

Dirty Secrets, Elaborate Conspiracies, and SUVs Idling in the Night (OK, Only the First One): A Forecast of Net Atlantic TC Activity, and Its Limitations 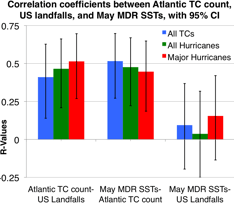 This year’s seasonal hurricane outlook is going to be a little different than previous years’ forecasts. Usually, this is where I say that there are two predictors that have a track record of making useful predictions of the number of tropical storms, hurricanes, and major hurricanes that will develop over the next six months: Atlantic sea surface temperature (SST) anomalies and the state of the El Nino/Southern Oscillation (ENSO). And, as shown at left by the middle set of bars, May SST anomalies in the Atlantic’s main development region do, in fact, correlate well with seasonal tropical cyclone activity in the Atlantic Basin.

However, as shown by the rightmost set of bars, May SSTs do not correlate whatsoever with what we actually care about— how many tropical cyclones will strike the United States coastline in the upcoming year. Remarkably, as shown by the leftmost set of bars, the number of storms that develop explains only 20-25% of the variability in U.S. landfalls, with genesis location and steering currents accounting for the other 75%. To put it another way, even if we knew exactly how many storms were going to form in a season, there would still be a huge amount of uncertainty in the estimate of how many storms would make landfall. For example, the 2010 and 2004 hurricane seasons both were very active, each with at least 15 named storms, 9 hurricanes, and 5 major hurricanes. However, tropical cyclone damages tallied $250 million in 2010 and over $62 billion in 2004. Quite a difference in outcomes!

Taking a look at the actual SSTs this year with this in mind (at right), 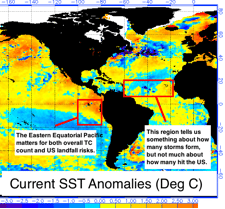 it is clear that a targeted seasonal forecast should pay more attention to the evolution of ENSO in the Pacific (that matters to both TC count and U.S. landfall risks) than the moderate SST anomalies in the central Atlantic and Caribbean (that matter only for TC count). For what it’s worth, I expect approximately 14 tropical storms, 6 hurricanes, and 2 major hurricanes this season. These numbers are close to the 20-year mean and reflect near to slightly above normal SSTs in the Atlantic and recent trends in the development of the El Nino event that will be discussed more fully in the next section.

Hit by a Train?: A Quantitative Assessment of U.S. Hurricane Landfall Risks 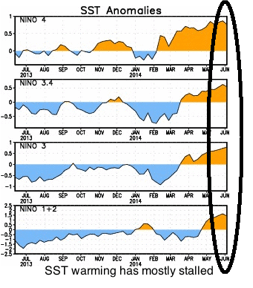 If a purely count-oriented approach to seasonal TC forecasting is of limited usefulness, what then? The answer is to focus on predicting the conditions that lead to the favorable steering currents and environmental conditions that bring storms towards the United States. Fortunately, ENSO plays a major role in modulating these patterns. Basically, a warmer than normal equatorial Eastern Pacific Ocean (El Nino) is negatively correlated with U.S. landfall activity due to enhancing destructive vertical wind shear over the western Atlantic Basin. In strong El Nino events, this shear is overwhelming, but more intermittent in weak/moderate cases. There are also important distinctions in typical steering flow between weak and strong El Nino events.

While other seasonal forecasts have extrapolated the rapid transition from a weak La Nina this winter to the current weak El Nino to suggest an incipient strong +ENSO event will cause a well below average 2014 hurricane season, to me, the state of play is more complex. Over the past month and a half, the observed warming has leveled off dramatically, and new model data now suggests the additional warming over the next several months will be limited. Additionally, the warmest anomalies may be eventually located further west in the Pacific, which historically mutes some of the negative relationship between ENSO and US landfall risk. These trends can be used to identify some years in the historical record that are most similar to 2014; namely, 1951, 1976, 1986, 2002, 2006, and 2009. While none of these years saw excessive tropical cyclone activity in the Atlantic, most of them were not completely uneventful along the U.S. coastline, particularly on the Gulf Coast. (However, there were no major hurricane landfalls among this analog set.)

Taking the composite of the steering pattern for these six years in the first and second halves of the season, as seen above, reveals a weak inclination for East Coast troughing through August. This is followed by a more robust tendency for central and eastern U.S. troughing in September and October, along with an implied weak Bermuda High along 65W. In the context of this steering regime, systems developing in the Gulf or Caribbean would tend to be plucked from the Deep Tropics and turned towards the Gulf Coast. It should be noted, however, that this is not a particularly favorable environment for delivering major hurricanes to the Gulf Coast as vertical shear remains elevated. Otherwise, this general pattern puts the east coast of Florida and the Northeast at well below normal risks of hurricane landfall, with the Carolinas also at below average risk, but not quite as reduced as the regions to its north and south due to the mean position of the modest ridging

The inputs of a plateauing weak/moderate El 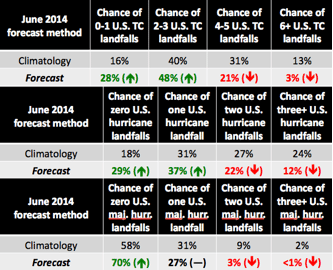 Nino event and a central U.S. trough-dominated peak season steering pattern can be synthesized into a statistical model of landfall risk to the U.S. coastline for the upcoming hurricane season. This model is run for all U.S. tropical cyclone landfalls (at right, top), hurricane landfalls (middle), and major hurricane landfalls (bottom), and the output is expressed probabilistically as the percentage chance of the specified number of landfall events occurring this year. Historical chances derived from the climatological record of landfalls are also given, and the model’s odds are shown in green when they are meaningfully higher than climatology and red when they are lower.

For example, there is a 70% chance that there will not be a major hurricane landfall on the U.S. coastline this year, which is higher than the 58% chance one might expect in an “average” season. In general, this model is consistent in suggesting below average risks of U.S. landfalls this year, with the shift toward lower levels of landfall risk increasing with intensity. Still, [SPOILER ALERT] while a U.S. major hurricane landfall is significantly less probable than usual this year, it remains more likely than not that several tropical storms and at least one hurricane will come ashore somewhere in 2014.

Finally, while noisy data makes specific quantitative estimates of regional U.S. tropical cyclone risk unfeasible, the graphic below shows a categorical classification of landfall chances relative to climatology in four broad zones. As indicated above, landfall risk along the Gulf Coast is near normal for tropical storms and hurricanes (though remaining somewhat below average for major hurricanes), and ranges from somewhat to well below normal along the U.S. East Coast.

Knock on Wood: The Bottom Line for the 2014 Hurricane Season

The 2014 hurricane season may have been written off in some quarters, but in my view, this is somewhat premature. While the Equatorial Pacific is already seeing weak/moderate El Nino conditions, in the last few months, the observed warming has stalled out. This means that the season is likely to see near to somewhat below normal tropical storm and hurricane counts. Focusing on risks to the U.S. coastline, chances of landfall are lower than normal, particularly for major hurricanes. However, there are indications that the U.S. Gulf Coast will be a favored region for potential tropical storm or hurricane landfalls this year, particularly relative to more notable declines in tropical cyclone risk along the East Coast. As ever, one should keep an eye out for crazy plot twists, but the 2014 season neither looks busier than normal nor extraordinarily quiet.

Like WeatherTiger's tropical coverage? What if I told you... you could get it in your inbox? Get every data- and science-driven WeatherTiger weekly tropical outlook and individual storm forecast for the 2020 hurricane season as soon as it is released. Sign up now for our tropical subscription package to get all our forecasts sent straight to you, plus FREE one-on-one consultation with Dr. Ryan Truchelut!