If you enjoy this seasonal outlook, please consider signing up for our Hurricane Forecasting Subscription Service to have all of WeatherTiger’s forecasts sent right to your inbox as soon as they are released.

Our clients have received 63 updates so far during the 2020 hurricane season, over half of which were true subscriber exclusives. Our daily tropical threat analyses will be sent to subscribers each weekday through late October as Florida navigates a risky last third of the season.

The outlook below may be shared freely. Enjoy, and stay safe.

And then there were none.

With the transition of Teddy and Paulette to non-tropical cyclones, a blessed silence has descended on the Tropical Atlantic. The remnants of Beta continue to rain out across the Deep South, but as of September 23rd, there are no active storms for the first time since the 7th.

Nor are there probable candidates to develop over the next week. With the Madden-Julian Oscillation pivoting through phases 6 and 7, upper-level winds are likely to be generally unfavorable for development for the remainder of the month. More than likely, the record-breaking ten named systems that have developed thus far in September will be it.

This rare breathing room brings an opportunity to take stock of the wild ride that has been the 2020 hurricane season. There have been a whopping twenty-three named storms, scorching through the entire list of names a month faster than the previous pacesetter, 2005. However, storms have been predominantly weak and short-lived, and a more typical two major hurricanes have developed. In accumulated cyclone energy (ACE) terms, this hurricane season has been more active than about four out of every five years at the two-thirds mark.

Unfortunately, the most intense tropical activity of 2020 has occurred near the U.S. coastline. A record-breaking nine U.S. tropical storm or hurricane strikes, led by category 4 Laura, have tallied more U.S. landfalling ACE than in roughly nine out of ten seasons to this point. Some good news: three-quarters of U.S. landfall activity occurs prior to the last week of September, and threats are uncommon beyond this time for the western Gulf, mid-Atlantic, and Northeast.

However, October is a risky month for Florida, which other than Hurricane Sally’s amphibious barge assault on Pensacola and significant Panhandle flooding, has only been grazed by 2020’s tropical onslaught. Florida hurricane climatology has three distinct peaks. The first, in mid-June, is driven by weak but wet Gulf Coast tropical storms; the second in early and mid-September is associated with the overall peak of the season and long-tracking threats from the east.

The third peak is in mid-October, with late-season landfalls focused on South Florida and the Florida Gulf Coast. Hurricane impacts in these areas are as common in October as September, as fall storms move north and northeast out of the favored development region in the western Caribbean. Wilma and Michael are recent maximal examples of this type of threat. 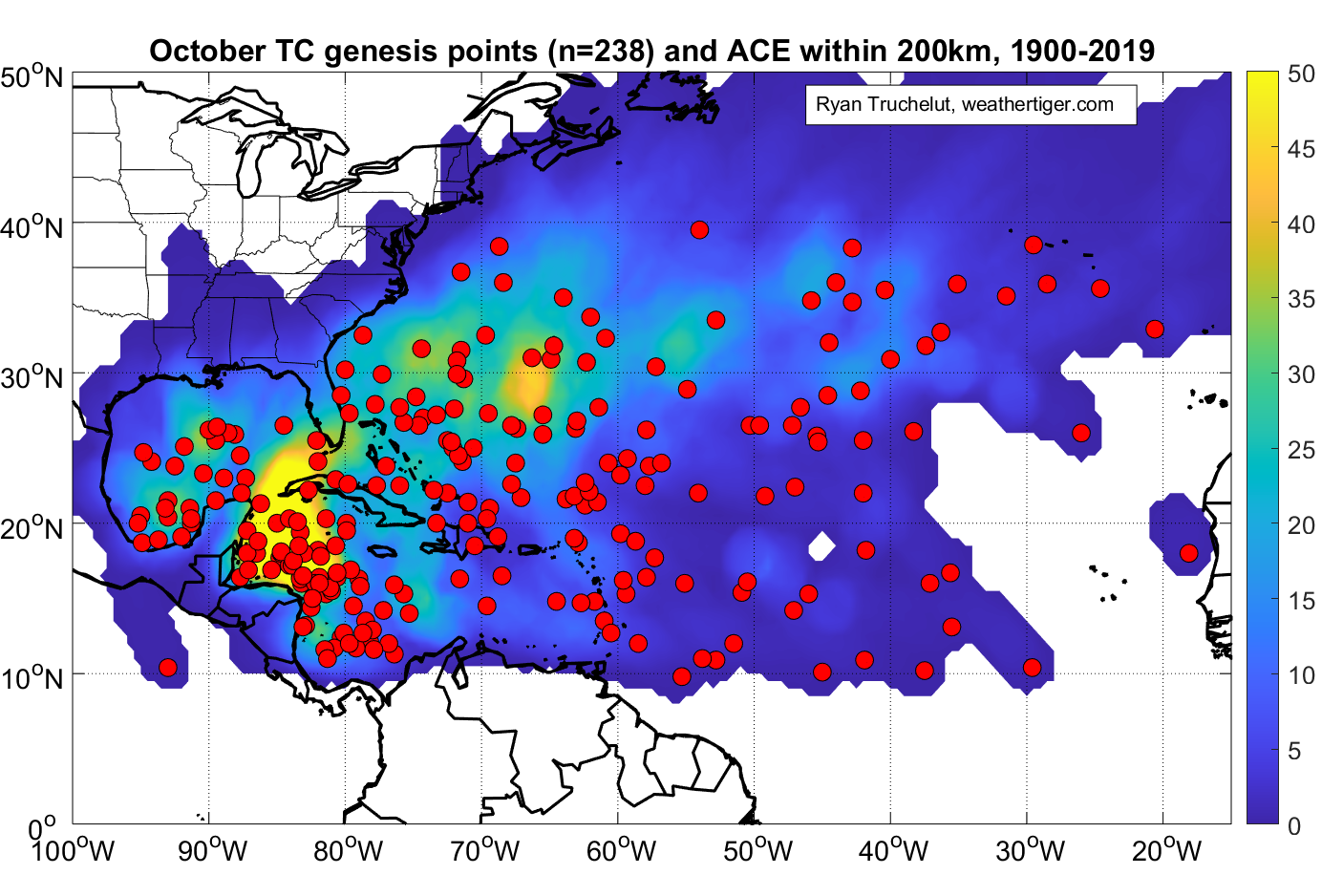 With a third of Florida landfall activity still ahead, let’s investigate the factors that have the strongest historical relationship with late season tropical activity in order to shed some light on what we can expect in October. As shown above, early October is a time of transition in the Tropics. Storm formation between West Africa and the Lesser Antilles becomes increasingly unusual, while Central American gyre circulations and stalled frontal boundaries act as catalysts for development in the Caribbean and subtropical western Atlantic.

Therefore, warmer than average sea surface temperatures (SSTs) in these areas are important for an active October. This year, while the northern Gulf has trended slightly cooler than normal thanks to upwelling from Laura, Sally, and a couple merciful frontal passages, the western Caribbean remains warmer than average by several degrees. In fact, as shown below, the current anomalies in the Atlantic closely resemble the historical September SST pattern most strongly correlated with a busy final third of hurricane season. 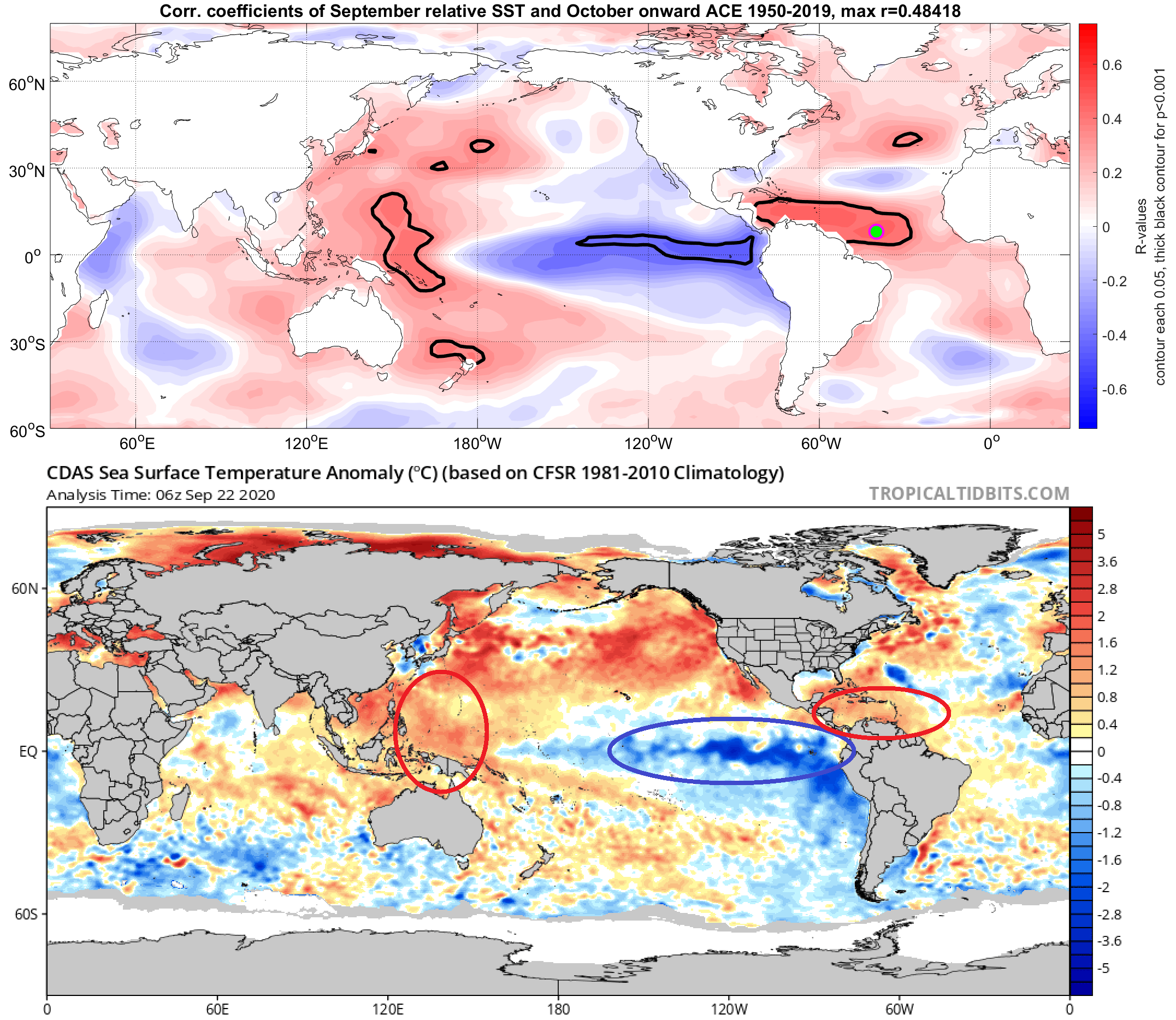 Another key piece of the puzzle lies in the Pacific Ocean. Several weeks ago, NOAA officially declared the onset of La Niña conditions in the equatorial Pacific, meaning that cooler than normal SSTs west of South America are having a significant influence on global weather patterns that is likely to persist into early 2021. Once again, the specific configuration of 2020’s La Niña closely matches that best correlated with an active remainder of the season.

La Niña is a particular concern in October, as its canonical reduction of Atlantic wind shear is most focused on the Gulf of Mexico and Caribbean Sea. As these are the favored breeding grounds for late-season tropical storms, an established La Niña often acts to extend the hurricane season. For the range of intensities in which this year’s La Niña will likely fall, the median last third of the season yields almost twice as much ACE as the median of all years. Additionally, while no major hurricanes develop after October 1st in two-thirds of years since 1950, during moderate La Niñas, two-thirds of seasons have one or two major hurricanes.

Quantitatively taking into account warm SST anomalies in the western Atlantic Basin and a burgeoning La Niña, WeatherTiger’s latest objective modeling confirms and active signal. Using August ocean and atmosphere inputs, our algorithm suggests a most likely outcome of ACE around 50% above normal after October 1st. La Niña has strengthened in the past few weeks, so I would expect that current SST inputs would result in an even more bullish forecast. We will re-run our model next week once the September data are finalized to confirm that hunch. 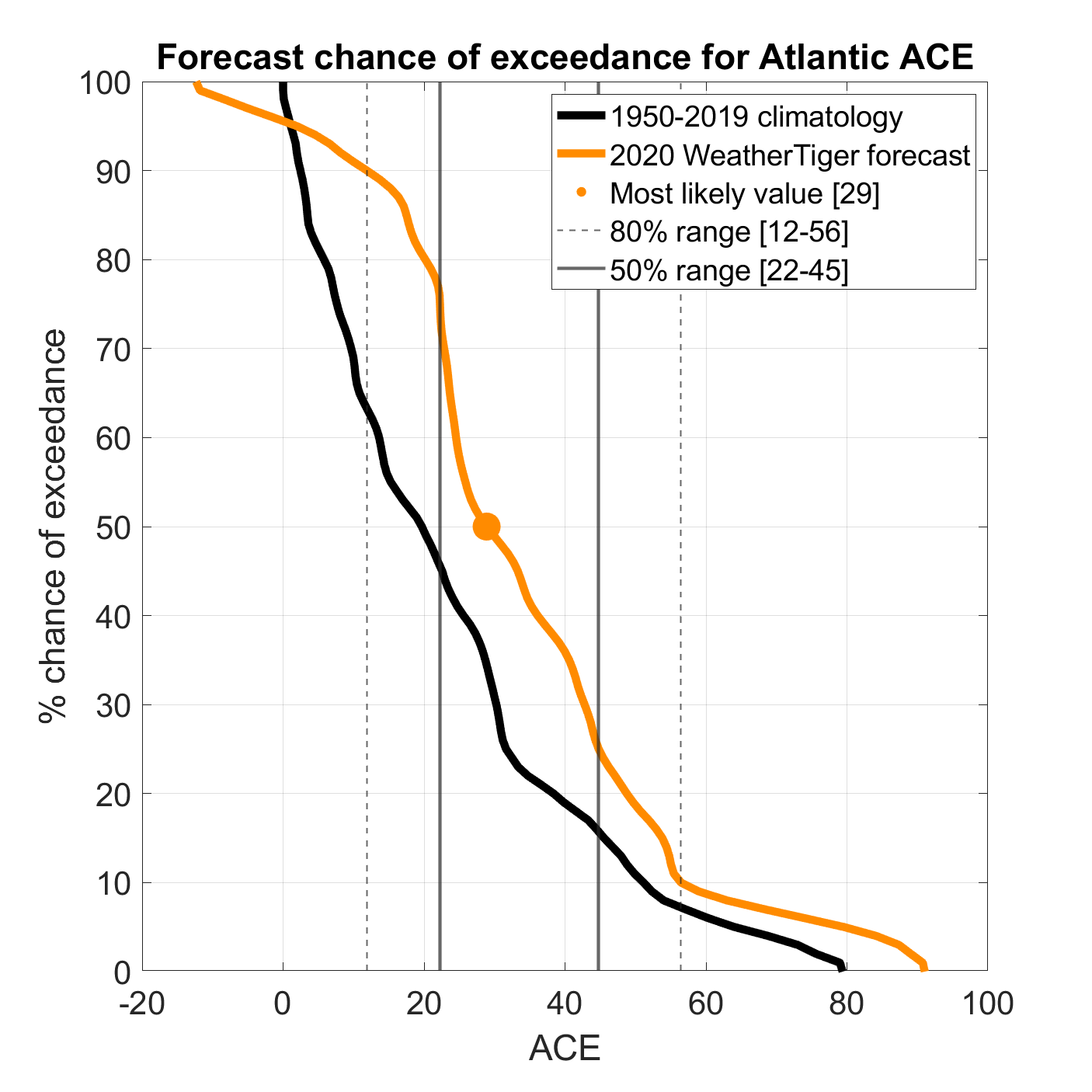 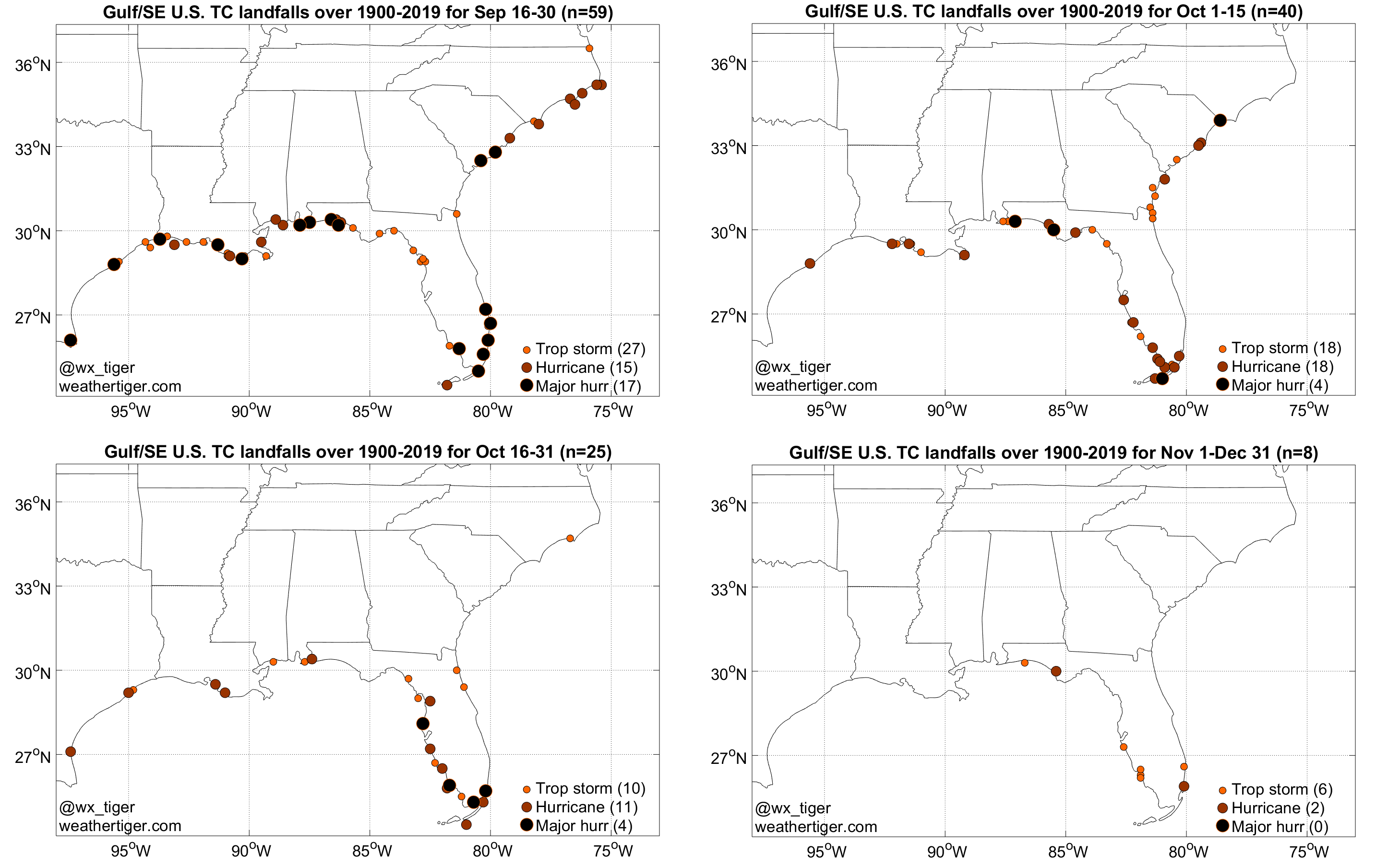 Historical points of landfall for late September, early October, late October, and November and beyond are shown below. Note that these impacts are most concentrated in Southwest Florida.

In summary, the current tropical reprieve may last for another 7 to 10 days, but an incoming surge of upper-level support for convection is expect to light up the western Caribbean in early October; this risky pattern may well repeat a couple of times over the next four to six weeks. This return to MJO phases 8, 1, and 2 is likely to be accompanied by a reduction of wind shear over the Caribbean and Gulf between October 3rd and 10th, setting up a potential window for Eastern Gulf landfall risk as indicated by almost every recent run of the GFS-Parallel ensembles. We shall see.

As much as all of us (especially me) would like to will this exhausting season away, for at least the next month the hard data indicate that we need to keep watching the skies.