Each year’s list of Atlantic tropical cyclone names has twenty-one entries: one for all twenty-six letters of the alphabet, less Q, U, X, Y, and Z.

If there are more than twenty-one named storms in a season, the back-up names are the twenty-four letters of the Greek alphabet. In the vanishingly remote case that additional storms develop beyond the surely world-ending Hurricane Omega, it is unknown what naming convention would be used. I humbly submit that it be a steadily escalating number of poop emojis.

WeatherTiger’s updated seasonal forecast for August finds despite a 2020 tropical rollercoaster already exceeding the total U.S. impacts of many full seasons, our punishment must yet be more severe. We predict a roughly two-thirds chance of twenty-two or more named storms this year, along with total tropical activity 80% above normal. 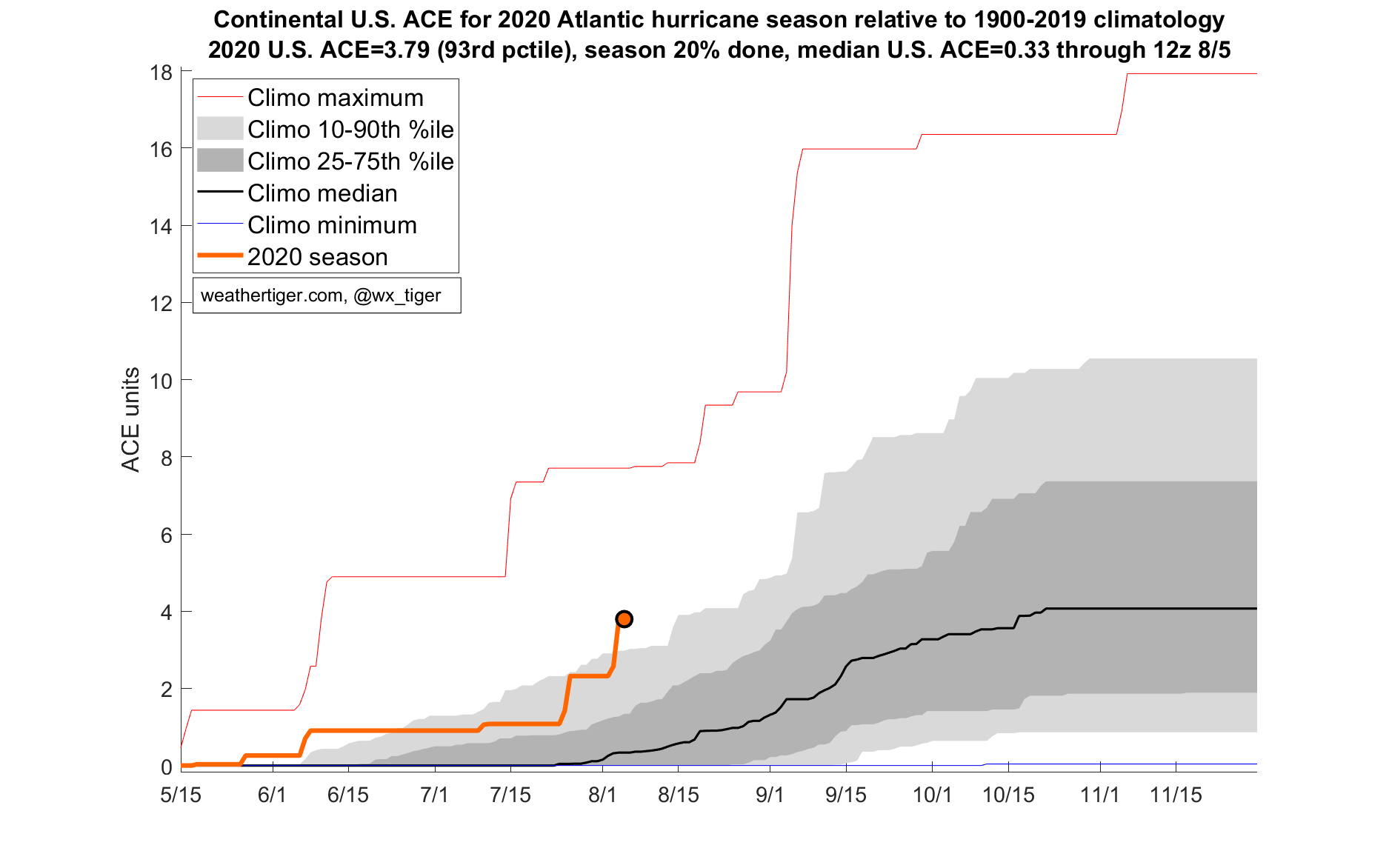 In other words, it’s going to be a big fat Greek hurricane season.

This forecast is a reflection of both a harrowing first two months of the season, and signals for a hyperactive August, September, and October from historical leading indicators. Through early August, U.S. landfall activity in 2020 is higher than what occurred in nearly half of all seasons since 1900 for the entire year. This is despite only about 20% of the hurricane season being over, on average, from a U.S. landfall energy perspective.

Thus far, two hurricanes and three tropical storms have struck the U.S. coastline. This equals and exceeds, respectively, the number of total U.S. impacts in 2019. And while both Hanna and Isaias were category 1 intensity at landfall, they punched above weight in terms of wind and flooding impacts.

This week, Hurricane Isaias fumbled its approach to Florida but spread four to eight inches of flooding rains and damaging wind gusts exceeding 70 mph across the rest of the Eastern Seaboard. At some point, Isaias required watches or warnings for every inch of the mainland U.S. Atlantic coast, the most expansive advisory coverage since Donna in 1960.

While 2020’s nine tropical storms and two hurricanes have made their presence known, there is not a statistically significant relationship between activity or U.S. landfalls prior to early August and that occurring in the rest of the season. Rather, with 80% of the historical risk ahead, the concern going forward is a likelihood of favorable conditions for hurricane development in the busiest eight weeks of the season from mid-August to mid-October. 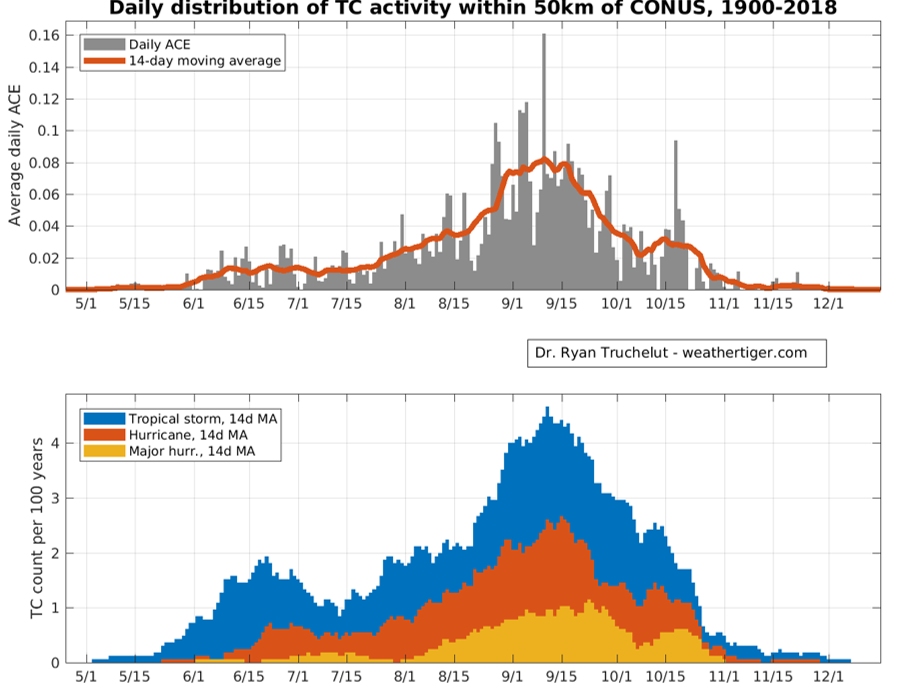 This window is the most active—50% of historical tropical cyclone activity occurs in September alone—because it is usually the only time when low-level instability, mid-level moisture, and upper-level wind conditions all align to support storm development over the Atlantic’s Main Development Region stretching from West Africa into the Caribbean. 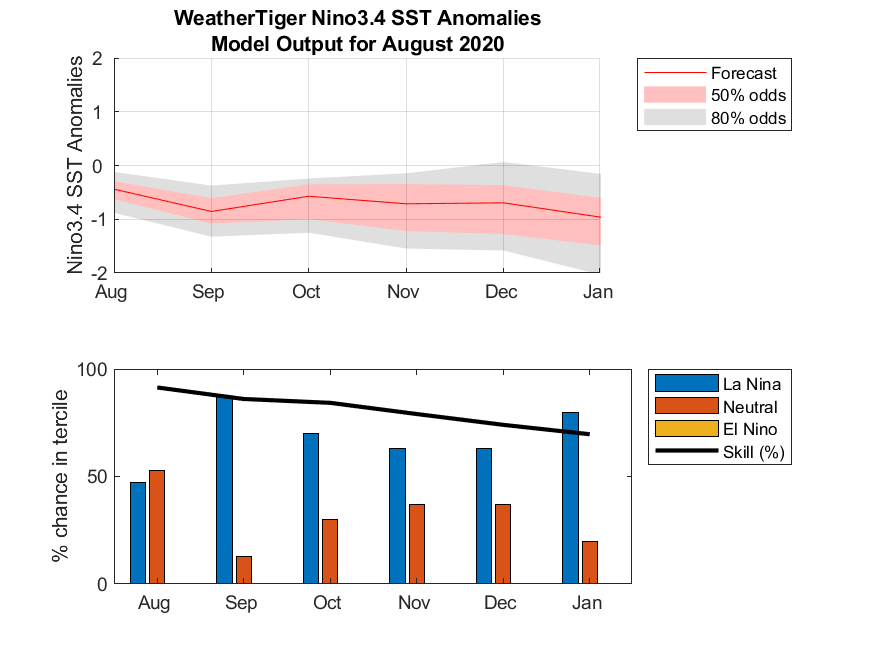 Because oceans change slowly, looking at sea surface temperature (SST) anomalies in the spring and early summer offers some modest predictive power for the year ahead. However, seasonal forecasting skill improves from about 15% better than climatology in early June to a 40% improvement by early August, as mid-summer weather patterns in the Tropical Atlantic tend to lock into place through early fall. Uncertainties in ENSO trajectory are also much diminished in August vis-a-vis June.

Qualitatively, the story goes like this: the near-record ocean warmth across the entire Atlantic Basin is increasing the latent heat energy available to storms and destabilizing the lower atmosphere; a developing La Nina in the central and eastern Pacific is keeping easterly trade winds in check and diminishing upper lows to reduce western Atlantic wind shear; persistent convection over East Africa is generating vigorous tropical waves, contributing both ample moisture and plentiful seeds from which hurricanes can grow.

Let’s look at the components of our predictor set one-by-one:

Any story about seasonal activity begins with Atlantic SST anomalies. While spring and early summer anomalies were modestly warmer than average, there was a significant warming of the MDR relative to normal in mid-July on the order of 0.5C. This warming was concentrated in the areas of the central Atlantic and Caribbean shown at left to have the strongest historical relationship with future activity, and the monthly mean SSTAs for July closely match the spatial distribution of the SSTA-ACE correlation coefficient. This is never a good sign.

Also not a good sign is that the top analog match to weighted Atlantic SSTAs is 2005, the second most-active hurricane season of all-time. The rest of the analog set also has some heavy hitters (1998, 1969), though also mixed in are some quieter years in the 50s. 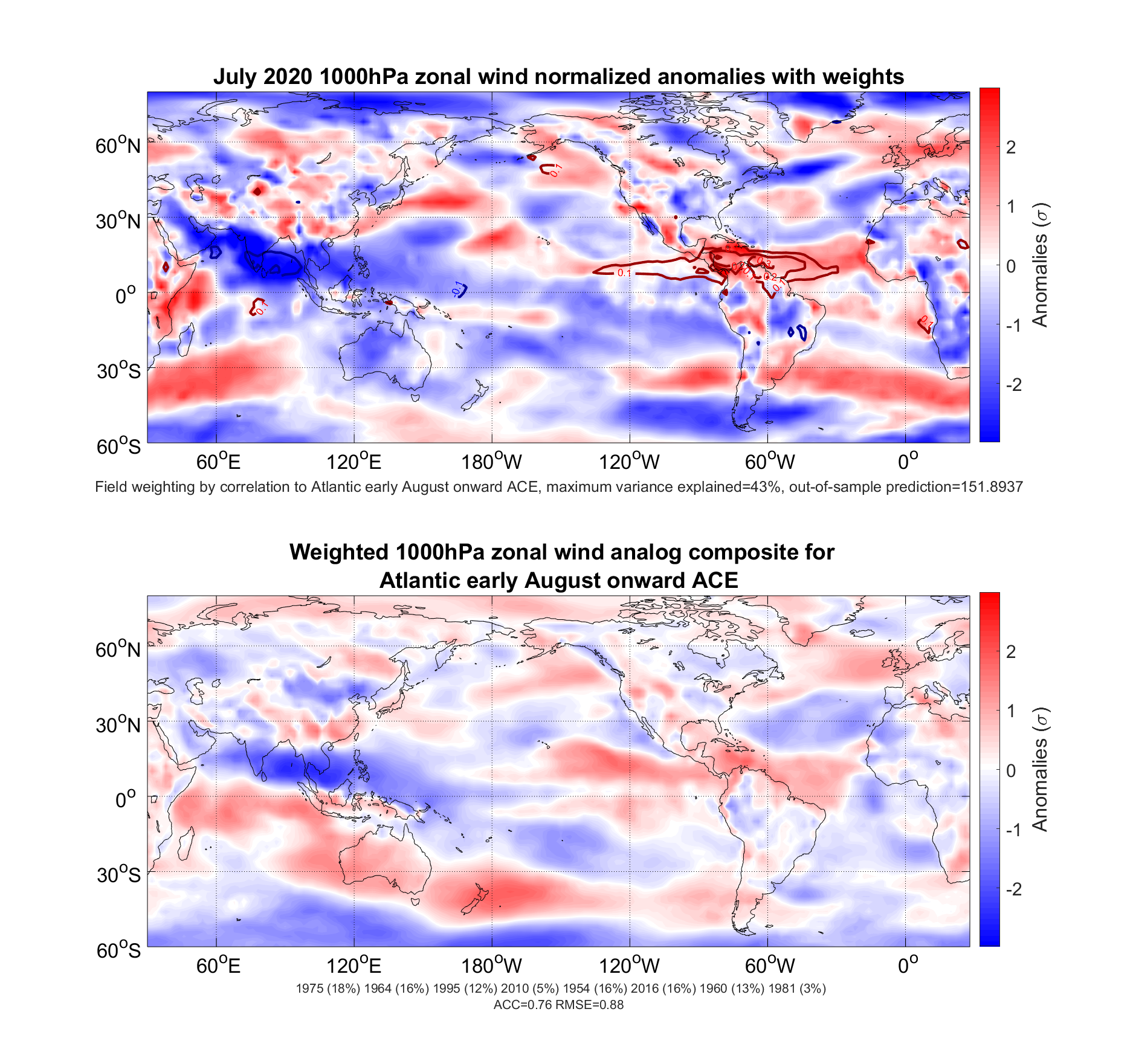 Historically, the strength of July low-level zonal winds in the Caribbean is the best single predictor of August-October activity. Weaker easterly trades are more favorable for storm development as they allow tropical waves to more easily closing off of an earth-relative circulation, and also diminish one half of the vertical shear equation. Weaker easterlies than normal in July 2020 are shown in red above, and again fit neatly into the region where weaker easterlies have the strongest positive correlations with upcoming Atlantic ACE. The weighted analog set is once again mixed, but with a preponderance of active and hyperactive years (1995 included).

The 1995 analog is dominant in matching to July MSLP and lower-level humidity anomalies, taking the leading position in the optimized analog set for each. While the MSLP, easterly trades, and vertical shear were much lower than normal across the Atlantic this July, moisture availability lagged, particularly over the central Atlantic. This lack of moisture likely held the number of tropical waves developing the the MDR or Caribbean to “just” two– which is actually a very early start to the Cape Verde season.

However, as shown at left, the observed dryness in the Atlantic in July (in blue) is not actually in a location where those anomalies are statistically meaningful for the season going forward.

Rather, humidity was above normal over west Africa and the far eastern Atlantic, where there is a stronger positive historical relationship, indicative of a very strong easterly wave train emanating from an Indian Ocean standing wave. Mid-level moisture may have been a drag on July preventing a 2005-like outbreak of major hurricanes, but it should not be expected to continue to act as a brake on activity in the peak season. 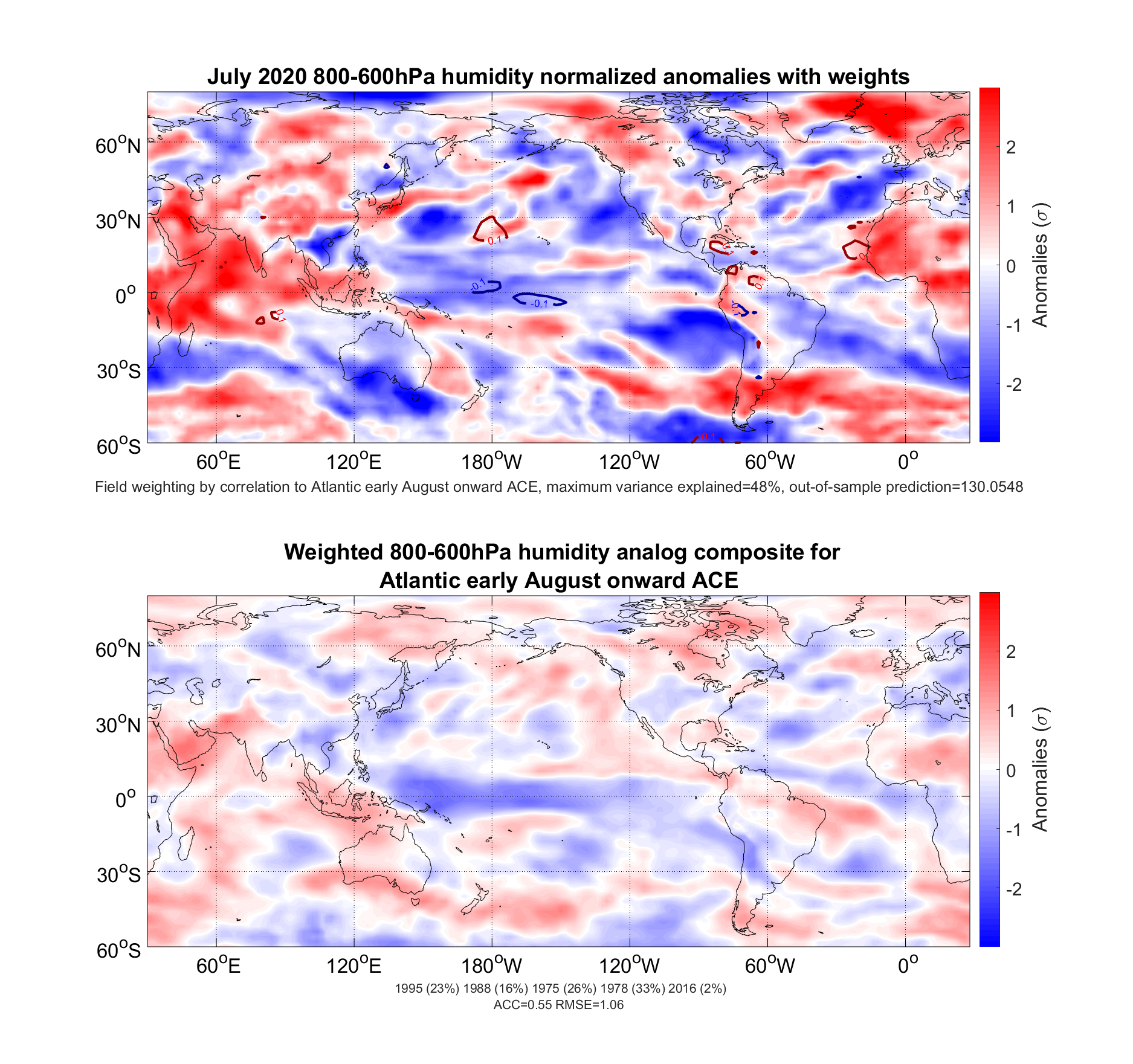 Quantitatively, WeatherTiger’s predictive algorithm weighs these inputs to make a probabilistic forecast of seasonal activity. For August 2020, our projection is a 50% chance of between 145 and 220 total units of Accumulated Cyclone Energy and a most likely outcome of 180. Around 100 ACE units constitutes a normal season. The chance of 2020 breaking the all-time ACE record of 258, set in 1933, is roughly 1-in-10. Full probabilities are shown in the exceedance plot at right. 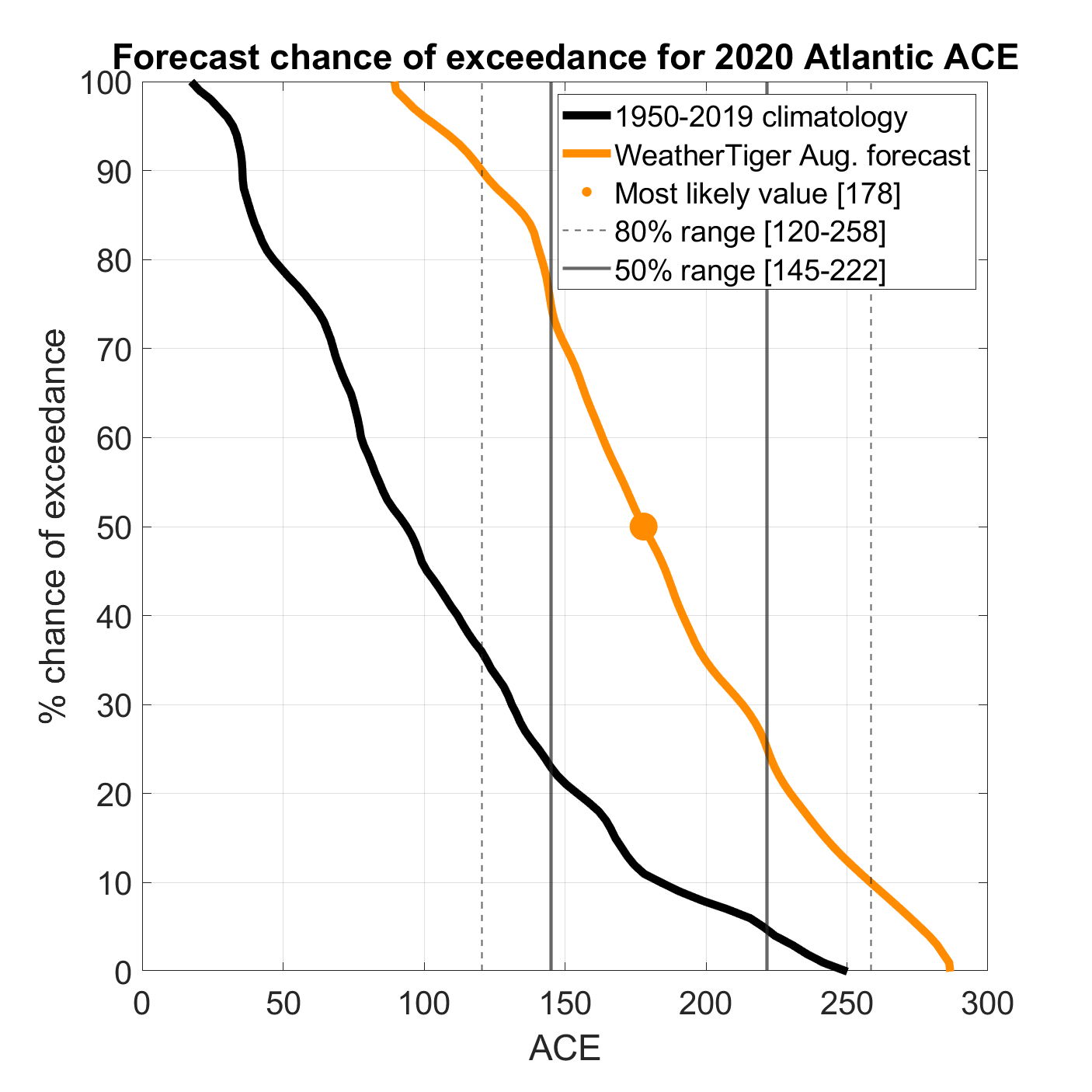 These numbers are broadly in agreement with other forecast groups, including Colorado State University, and translates into a 50% confidence interval forecast of four to six major hurricanes, nine to twelve hurricanes, and twenty-one to twenty-four named storms. (Nothing screams going Greek like shotgunning a 24-pack.) Our ACE forecast is unchanged since the June update, reflecting that these highly favorable conditions were generally expected to develop by our algorithm earlier this summer. However, because of the record nine named storms through early August, and two hurricanes, these numbers have been revised slightly higher since June.

A couple caveats to bear in mind here: the rapid warming of Atlantic SSTs mean that July monthly anomalies may not fairly represent SSTs going forward, should the state at the end of the month persist into August and beyond. Early August SSTs so far have not given back any of these late gains. Additionally, the persistent rising branch of the Walker circulation favoring east African convection is predicted by run after run of monthly modeling to persist through September, a configuration closely matching that observed in the maximally hyperactive month of September 2017. Additionally, MJO phase looks favorable for late August and early September Atlantic activity. So even though our ACE numbers are much higher than average, there are still some important factors to which our model is partially, if not fully blind. If I was to make a qualitative adjustment to this forecast, it would be up, not down. 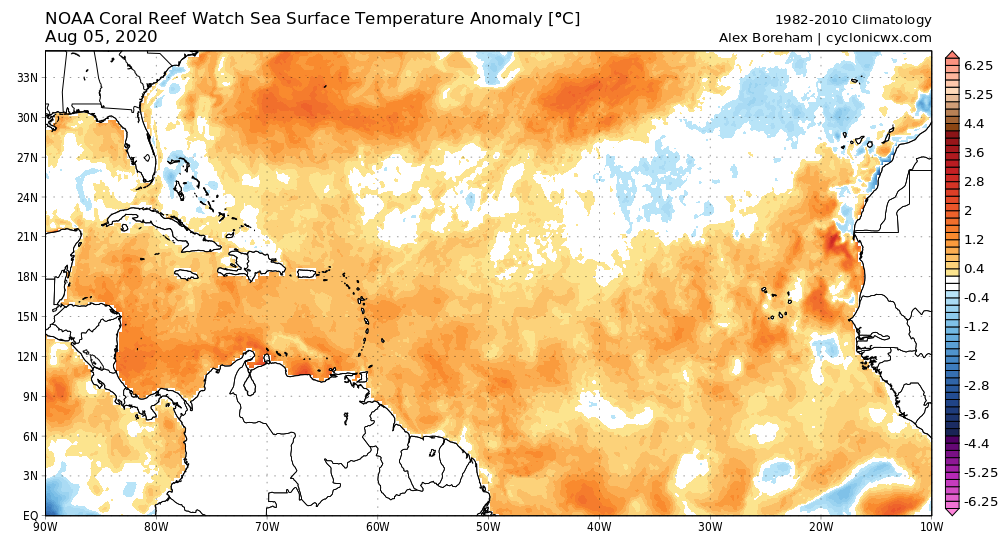 So, a warning. The Tropics are likely to be fairly quiet for the next seven to ten days, though a tropical wave may try to organize in the central Atlantic by the middle of next week. Given everything I’m looking at, that’s not likely to be true much longer than that. Please take this opportunity to review your hurricane plan and replenish your hurricane kit in this reprieve, because life is going to come at us fast in the near future, 2020 style.

In conclusion, WeatherTiger’s seasonal outlook for August calls for continued hyperactivity in the Atlantic. And while we’re not forecasting the need for any emoji-based names, the peak of the season still looks, well, suspiciously like the one I referenced above.

Like WeatherTiger's tropical coverage? What if I told you... you could get it in your inbox? Get every data-driven WeatherTiger weekly tropical outlook and individual storm forecast for the 2020 hurricane season as soon as it is released. Sign up now for our hurricane forecasting subscription package to get all our forecasts sent straight to you, plus tons of subscriber exclusives.