Welcome to WeatherTiger, a next-generation meteorological consultancy!  We hope you enjoy this updated preview of our comprehensive Atlantic hurricane season coverage. To receive monthly updates of the most advanced seasonal tropical cyclone outlooks on the market, daily storm-specific forecast videos during hurricane threats to the United States, and WeatherTiger’s famous weekly tropical outlooks, please subscribe to our Severe Weather package.

Thanks for your interest, and please drop me a line if you have questions or would like to book an appointment. On with the forecast!

Welcome (Back) to EARTH*: The Resurgent Potential of the 2016 Hurricane Season

Several decades ago, after a long period of peace, a powerful flotilla from far beyond the horizon slammed into the United States. And though this cohort did great damage, we fought them off and rebuilt, with the invading force disappearing as suddenly as they had arrived. Still, even after a long and mostly calm intervening period, we can’t help but wonder if this is the year they will return to wreak havoc from the skies once more…

OK, that applies to two things: First, my personal choice for greatest film of all-time, Independence Day, in which Earth President Bill Pullman teams up with end credits novelty rap specialist Will Smith to save the planet after aliens destroy 100% of our observation deck gift shops and rotating restaurants. And second, to Atlantic hurricane seasons, which after an unprecedented period of destructive landfall events between 1995 and 2005, have been curiously quiet from a U.S. perspective since 2006 (with some notable exceptions, of course). Believe it or not, Wilma (2005) was the last major hurricane landfall in the U.S., as well as the last hurricane landfall–period– in Florida. Nevertheless, as 2016 marks the arrival of the alien reinforcement fleet to once again put the mettle of Jeff Goldblum, Vivica A. Fox, and (ugh, apparently) Hunger Games Gale** to the test, the obvious question is whether the 2016 hurricane season will go along with the hot trend of re-litigating every aspect of the 90s including excessive Fruitopia consumption, and have a similar Resurgence.

Answer: For the first time in a few years, it’s possible. As a reminder, WeatherTiger’s seasonal hurricane forecasts focus on predicting the risks of tropical cyclone landfalls, rather than the number of developing storms. This is because the number of storms that develop explains only about 25% of the variability in U.S. landfalls. Traditional forecasting methods, like Atlantic May SST anomalies, do correlate with seasonal tropical cyclone activity in the Atlantic basin, but unfortunately, such predictions do not necessarily correlate with what we actually care about— the count and intensity of tropical cyclones that will strike the U.S. coastline in the upcoming year. Even if we knew exactly how many storms were going to form in a season ahead of time, there would still be a huge amount of uncertainty in how many storms would make landfall, simply because genesis location, steering, and intensification processes are far more deterministic to landfall outcomes. This was the subject of my dissertation, so you can either just trust me on this, or check out that 200 page sleeping pill.

However, as a general orientation to the season ahead, WeatherTiger’s proprietary TigerTracks model projects a most likely total seasonal activity of approximately 135% of the 1950-2015 average ACE, or a somewhat above average activity level. Based on previous model performance, there is a greater than 50% chance that total seasonal activity falls between 90% and 170% of normal. In terms of tropical cyclone count, TigerTracks projects a most likely outcome of 14 tropical storms, 9 hurricanes, and 3 major hurricanes this year***, with probabilistic distributions relative to normal shown above. For instance, there is the highest chance of 3 major hurricanes (~22%), and about a 60% chance of 2-4 major hurricanes in the upcoming season. This forecast is a little less confident than normal, as it reflects strong recent trends toward a La Niña and warming SSTs in the western tropical Atlantic. More details on that below. For the reasons stated above, the remainder of this forecast will not be concerned with count, and instead predict the odds of U.S. tropical cyclone landfall in the upcoming 2016 season.

Not Going Quietly Into the Night: A Quantitative Assessment of U.S. Hurricane Landfall Risks 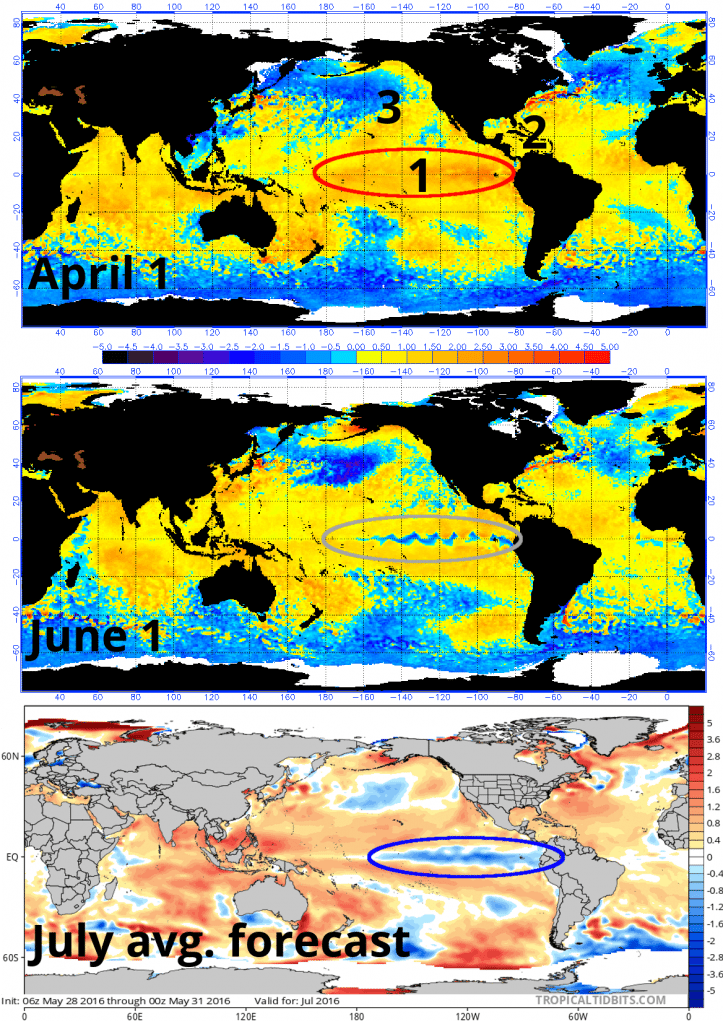 a count-oriented approach to seasonal TC forecasting can be somewhat useless, a better method is to focus on predicting the favorable steering currents and environmental conditions that allow storms to develop and move towards the United States. We’ll focus on three major drivers here, numbered on the map at left. First, the El Niño-Southern Oscillation (1; ENSO) plays a major role in modulating these patterns. Basically, a warmer than normal equatorial eastern Pacific (El Niño) is negatively correlated with U.S. landfall activity due to enhancement of destructive vertical wind shear over the western Atlantic Basin; in La Niña years, these winds are absent. Above normal sea surface temperatures in the southern and western Atlantic basin (2) are also favorable, providing higher energetic heat potential for TCs and catalyzing development closer to the U.S. landmass. Finally, the Pacific Decadal Oscillation (3; PDO), a pattern of sea-level pressure and SST anomalies in the subtropical and mid-latitude Pacific, is known to have a relationship with seasonally favored genesis regions and jet stream configurations that modulate U.S. landfall risk.

As we begin the 2016 hurricane season, all three of these metrics are making globally coordinated moves. (It’s almost as though they are using our own satellites against us.) Most notably, there has been a major change in ENSO state in the past two months. Earlier in the spring, some models suggested that the third-strongest El Niño on record observed in the winter of 2015-16 might simply persist through the summer and into the fall. However, this has not been the case. As can be seen at left, the equatorial Pacific has cooled rapidly throughout April and May, now stands very close to normal on the way to a summer La Niña onset, as forecast by all dynamical climate models (bottom panel, left).

As El Niño hurricane seasons, like last year, tend to be some of the least active in the historical record, this change alone dramatically shifts landfall odds towards a baseline of at least average risks. However, there have also been key changes in the Atlantic and mid-latitude Pacific in the past month. As shown below at right, the western Atlantic, Caribbean, and Gulf of Mexico have warmed considerably relative to normal in the past 30 days, and are now showing positive anomalies consistent with an average season since the beginning of the warm Atlantic Multi-decadal Oscillation phase began in 1995. The proximity of the anomalies to the continental U.S. is also indicative of increased landfall risk, and models project this trend to continue into the summer.

The final piece of the puzzle is the PDO, which tends to be 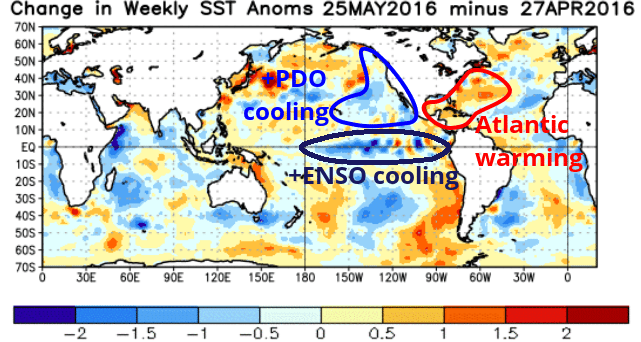 (but is not always) positive when ENSO is positive and negative during a La Niña. The past several years have been marked by a very persistent +PDO. Despite the trend towards La Niña conditions, dynamical models are adamant in suggesting the continuation of this warm PDO, as shown above. However, over the past month (and continuing through the past week), the observed warm anomalies in the PDO region have cooled notably, toward something closer to neutral conditions.  If that trend continues, some of the dynamical models may be wrong about the unfavorable subsidence they are projecting over the Atlantic during August and September. The most recent season to have an El Niño-La Niña transition, positive AMO, and neutral PDO was 1998, in which a muscular four hurricane and four tropical storm U.S. landfalls occurred.  To make matters even more complicated, if PDO goes too far negative, it may impact steering patterns in a way that pushes tropical cyclones out to sea. The 2010 hurricane season was superficially similar to 1998 in terms of ENSO, AMO, and activity (14TS/10H/3MH in 1998, 19TS/12H/5MH in 2010), but a negative PDO may have resulted in steering patterns that led to a paltry two tropical storm landfalls on the U.S. mainland.

As you can see, forecasting the 2016 hurricane season presents as agonizing a choice as Earth President Bill Pullman deciding whether or not to nuke Houston for the good of humanity. Fortunately, the TigerTracks risk prediction model used at WeatherTiger is capable of assimilating current and future ocean and atmospheric conditions and delivering an optimized, risk-weighted forecast that objectively accounts for multiple future scenarios. Still, if there are major shifts in anomaly morphologies over the next three months, as there could well be, our model output will evolve with the observational changes. As such, today’s early season forecast is more tentative than previous seasons. WeatherTiger will be providing a discussion of updated activity, landfall, and regional landfall forecast output from the TigerTracks model each month to Severe Weather and Full Access package subscribers.

With the previous points in mind, the TigerTracks model projects a most likely U.S. seasonal landfall activity total of approximately 125% of long-term average landfall energy, once again a somewhat above average activity level. Calibration of previous results indicates that there is a greater than 50% chance that total U.S. seasonal landfall activity falls between 65% and 170% of normal. It is interesting to note that experimental model variants only assimilating data from later in the summer yielded even higher projected landfall activity; we shall see if the operational model trends that direction over the upcoming months. In terms of U.S. landfall counts, TigerTracks projects a most likely outcome of 4 tropical storms, 2 hurricanes, and 0 major hurricanes this year, with probabilistic distributions relative to climatology shown above. The expected rates of U.S. tropical storm and hurricane landfalls in 2016 are above normal, while major hurricane landfall expectations are close to normal, only very slightly above average at a 45% chance of one or more events. This may reflect the model’s lingering expectation for PDO conditions unfavorable to the Cape Verde tropical cyclones disproportionately represented among historical U.S. major hurricane landfalls. Should the PDO continue trending less unfavorable for long trackers, the projected risks of U.S. major hurricane landfalls may increase in future TigerTracks model runs.

This Is Area 51, Sir, You Need Clearance: Breaking Down U.S. Hurricane Landfall Risks by Region

[This section is a WeatherTiger subscriber exclusive! To access this premium content, please consider registering for our Severe Weather package. Not only will you receive regional U.S. landfall risk forecasts and monthly updates to the seasonal outlook, but daily in-depth storm-specific forecast videos whenever the U.S. is threatened by tropical activity.]

The last few years may have been extremely quiet, but despite a strong El Niño over the winter, 2016 hurricane season ain’t heard no fat lady. This year presents a challenge to hurricane seasonal forecasters in that many of the key leading indicators are changing rapidly as the year begins, and thus there is more uncertainty than usual inherent in this outlook. Still, there are three major scenarios on the table:

I’ll be watching these trends carefully and issuing monthly updates to this forecast to WeatherTiger subscribers (who also receive exclusive daily briefings during active storm threats), so sign up now for the complete season-long coverage (and zaniness) you’ve come to trust. Of course, no matter what happens, remember: We’re going to live on. We’re going to survive. Today we celebrate… the first day of hurricane season. Eagle 1, fox 2!

*Note: Despite EARF memes to the contrary, Will Smith fully annunciates the final ‘th’ of Earth before punching an insolent alien directly in the face.

**If we lose to the aliens, I blame Gale. #teampeeta #goodbyegale

***This includes Alex and Bonnie, which developed in January and May, respectively.