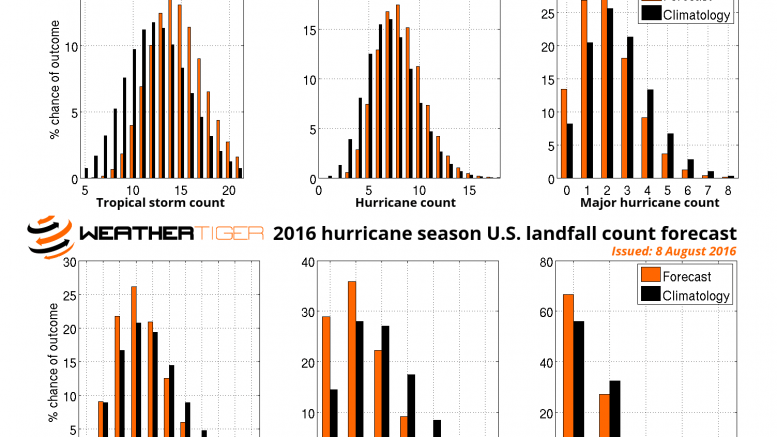 Welcome to WeatherTiger, a next-generation meteorological consultancy!  We hope you enjoy this updated preview of our comprehensive Atlantic hurricane season coverage. To receive monthly updates of the most advanced seasonal tropical cyclone outlooks on the market and daily storm-specific forecast videos during hurricane threats to the U.S., please subscribe to our Severe Weather package. Our free weekly tropical update videos, released on Tuesdays, are available here.

Thanks for reading and drop me a line if you have questions or would like to book an appointment.

After an unprecedented 11-year stretch with no hurricane landfalls in the state of Florida, Hermine has brought that streak to an end. In the wake of category 1 Hermine’s landfall near St. Marks in the Panhandle, the obvious question is if this event is indicative of more tropical threats in the second half of the season. As such, here’s a brief update to WeatherTiger’s seasonal forecast.

As of today, September 6th, 40% of the hurricane season is over from an energetic perspective, and 49% is complete from a U.S. landfall perspective. Our August update (below) called for near to slightly below average levels of both overall and U.S. landfall activity, with particularly reduced risks of major hurricane landfalls. To take a victory lap, the August outlook also specifically highlighted the Florida Gulf Coast as a region at elevated risk for hurricane landfall this year. (However, being right came at the steep personal cost of a four-day power outage and the full loss of my extensive freezer bacon reserves.) Running our proprietary TigerTracks model for early September oceanic and atmospheric conditions, in general we see a very slight uptick in expected activity over the August forecast, but the general forecast remains for 2016 to be a near to slightly below average season overall.

For overall TC activity in the Atlantic, look for seasonal activity of around 90% of average total storm energy, with an 80% chance of the season falling between 70% and 135% of 1950-2015 mean activity. The single most likely outcome in terms of storm count is just a slight adjustment to our August projection (+1H, no change to TS or MH), or 14 tropical storms, 8 hurricanes, and 2 major hurricanes, subject to the probability distributions shown above.

In terms of U.S. impacts, WeatherTiger now expects total landfall energy of 75-80% of the 1886-2015 average, or slightly below average activity. From 9/6 onward, the WeatherTiger forecast is for chances of at least one additional tropical storm, hurricane, and major hurricane landfall in the U.S. this year of about 80%, 60%, and 20%, respectively, as shown above. It’s worth saying here that in an average year, there are two hurricane landfalls somewhere in the United States, so another hurricane landfall would still be a very normal outcome. It also bears noting that forecast major hurricane landfall risks continue to be below average, and will really tail off if we make it through September unscathed. Regionally, there is no change from August, as it continues to be the Gulf Coast and especially the Florida Gulf Coast at the greatest landfall risks relative to long-term averages, with the U.S. East Coast lagging.

Bottom line: No major changes from August, despite Hermine. Look for normal or slightly below average activity overall led by below normal chances of U.S. major hurricane landfalls. However, if you’re in Florida, you might not want to replenish your bacon reserves just yet, especially along the Gulf Coast; there’s plenty of season yet to go.

So Far: The historical context of June/July’s activity and inactivity

The 2016 hurricane season is off to a quick start, at least in a superficial sense. Thus far, five tropical storms and two hurricanes have developed in the Atlantic basin, against 1950-2015 averages to August 9th of 2.5 and 0.8, respectively. Florida was also “Colin-ized” in early June, as a tropical storm with 50 mph sustained winds and plentiful rainfall washed ashore in the Big Bend. However, this start is a lot less impressive from 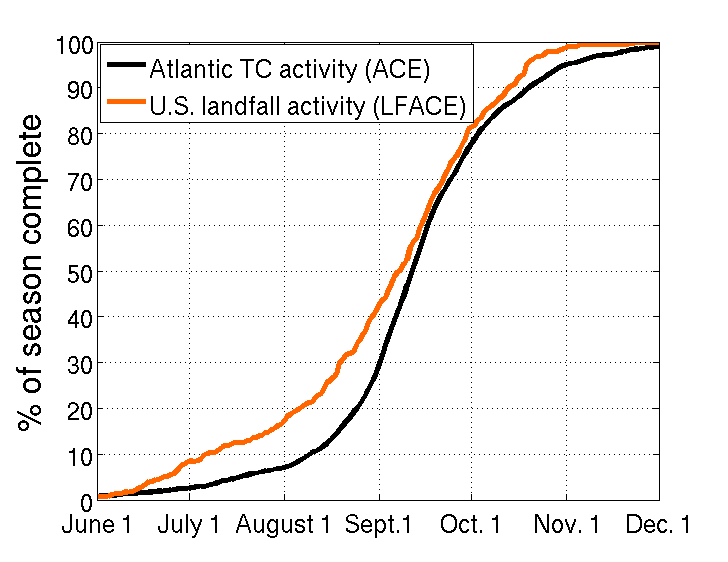 an energetic perspective, as the 9.89 units of accumulated cyclone energy (ACE) thus far in 2016 is almost exactly the long-term average to August 9th (9.83), and even the U.S. landfall ACE observed from Colin (0.20) is less than half of the average to this date over 1886-2015 (0.41). It’s still in the first quarter as far as the season goes, with just 10% of total ACE and 21% of U.S. landfall ACE expended by this date in the climatological record (see plot at right), but thus far, 2016 has not made the Atlantic great again by any stretch of the imagination.

There’s also been a good amount of chatter this summer about the ongoing “landfall drought” in the United States. While to some extent this is a product of the arbitrary threshold windspeeds defining hurricanes and major hurricanes, 2006-2015 indeed registered around half of the normal amount of U.S. landfalling cyclone energy expected over an average 10-year period (0.99 vs. 1.95 units of landfall ACE). The last time a major hurricane made landfall in the United States, HeadOn was being applied directly to the forehead, Larry Craig was an upstanding civic leader, Crocs and Uggs captivated a nation’s feet, and for reasons understood only to the people of 2005, Matisyahu played on a continuous loop at all Starbucks locations. To reiterate, when Wilma made landfall, Hasidic pop rap-reggae was popular. Let that sink in for a second.

So Now What?: How the 2016 hurricane season plays out from here

WeatherTiger’s June 1st update saw some potential for 2016 to break out of this medium-term inactive pattern. However, due to unfavorable developments over the past two months, mainly in Atlantic sea surface temperature (SST) patterns, the early August run of our proprietary TigerTracks model has backed off on this forecast. As such, the remainder of the 2016 hurricane season is now forecast to be a middling mishmash, much like Independence Day: Resurgence. Still, 2016 is likely to be more active than 2013, 2014, or 2015, and landfall risks to the Gulf Coast in particular remain somewhat elevated.

To understand the reasons for this downward trend, let’s take a look at SSTs in the three key regions I identified in the June forecast: the equatorial Pacific (1; ENSO), the subtropical Pacific (2; PDO), and the tropical Atlantic (3; AMO). In the equatorial Pacific, continued cooling has been observed, and technically, a weak La Niña is just now getting underway. While La Niña conditions are generally supportive of more active Atlantic hurricane seasons, this -ENSO event is no longer forecast to intensify much over the next couple of months, so it won’t exercise as strong of a positive influence as it appeared it might have in June. To the north in the subtropical Pacific, there’s been a relatively positive development in the weakening of the warm PDO and emergence of more neutral conditions. A neutral or cool PDO is linked to a more favorable steering pattern for delivering tropical cyclone activity towards the United States, but this influence has the weakest relationship on landfall counts of the three climate drivers discussed here.

Which leaves the Atlantic, and make no mistake, it’s the Atlantic SST changes that are really driving the forecast changes in the latest TigerTracks model suite. Looking at the latest SSTs above, you might be forgiven for asking what the problem is, as cherry red warm anomalies cover the western Atlantic, Caribbean, and Gulf of Mexico. However, looking further east, it’s actually the cooler blues in the eastern Atlantic that have the stronger historical relationship with U.S. landfall risks. These SSTs are less important for fueling individual storms, but rather tend to induce unfavorable low-level winds across the tropical Atlantic that limit opportunities for TC development, and cause storms to develop in locations less conducive to threatening the United States. It’s right in these regions that the Atlantic has rather surprisingly cooled the most over the past couple of months, a trend continuing even through the past week.

Synthesizing these threads, WeatherTiger’s proprietary TigerTracks model projects a most likely total seasonal activity of approximately 85% of the 1950-2015 average ACE, or a slightly below average activity level. Based on previous model performance, there is a greater than 50% chance that total seasonal activity falls between 65% and 110% of normal. In terms of tropical cyclone count, TigerTracks projects a most likely outcome of 14 tropical storms, 7 hurricanes, and 2 major hurricanes this year, with probabilistic distributions relative to normal shown above. For instance, there is the highest chance of 2 major hurricanes (~27%), and about a 70% chance of 1-3 major hurricanes.

TigerTracks also projects a most likely U.S. seasonal landfall activity total of approximately 80% of long-term average landfall energy, once again a somewhat below average activity level. Calibration of previous results indicates that there is a greater than 50% chance that total U.S. seasonal landfall activity falls between 50% and 135% of normal. In terms of U.S. landfall counts, TigerTracks projects a most likely outcome of 3 tropical storm, 1 hurricane, and 0 major hurricane landfalls this year (including Colin), with probabilistic distributions relative to climatology shown above. The expected rates of U.S. tropical storm landfalls in 2016 are close to normal, reflecting a tendency for weaker systems developing closer to the United States, while hurricane and major hurricane landfall expectations are around two-thirds of normal.  There is a below average (though of course, not inconsiderable) chance of one or more U.S. major hurricane landfall events this year, or 33%.

While noisy data makes quantitative estimates of regional U.S. tropical cyclone risk difficult, an experimental classification of landfall chances relative to climatology in four broad zones is shown above. The TigerTracks methodology is keying in on the Gulf Coast and Florida as the regions where landfall odds are closer to normal (perhaps 75% to 100% of normal risks) over the remainder of 2016. The Southeast and Northeast, or collectively the U.S. East Coast, have well below average landfall risks in the model, less than two-thirds of normal. In contrast, the Florida Gulf Coast is under near normal (75-115%) landfall risks over the remainder of the season. In several hurricane seasons similar to 2016, systems developing in the Caribbean Sea have moved north and east across the west coast of Florida between mid-September and late October, a common occurrence in even weak La Niña years.

So Long: The bottom line for the next three months

Billy Joel could easily re-write “We Didn’t Start the Fire” (Bud Light Lime, Pokemon Go / GEICO Cavemen had a TV show???) many times over with events since the last major hurricane landfall in 2005, but that doesn’t mean that the concept of being “overdue” for hurricane strikes has predictive power. In fact, as the Atlantic basin has multi-annual and multi-decadal cycles of tropical cyclone activity, the nebulous concept of mean reversion might actually be one of the worst possible ways to forecast.  Despite some early promise, global climate modes have shifted in the past several months in a direction that is no longer indicative of elevated TC risks, and the 2016 hurricane season is now unlikely to have significantly above average overall activity or U.S. landfall events. Instead, look for below normal aggregate landfall risks in the United States, especially along the East Coast. Nevertheless, the remainder of 2016 will almost certainly be more active than the exceptionally quiet stretch of years from 2013-2015, and at least one U.S. hurricane landfall remains more likely than not (70%+ chance), particularly given the development of a more favorable cool PDO steering pattern. Residents of the eastern Gulf Coast are advised to keep a particular eye on the skies in September and October, and it remains certainly possible that Florida’s ten-year hurricane drought could end in a hurry, despite the expectation that 2016 will be a near to below normal season overall.