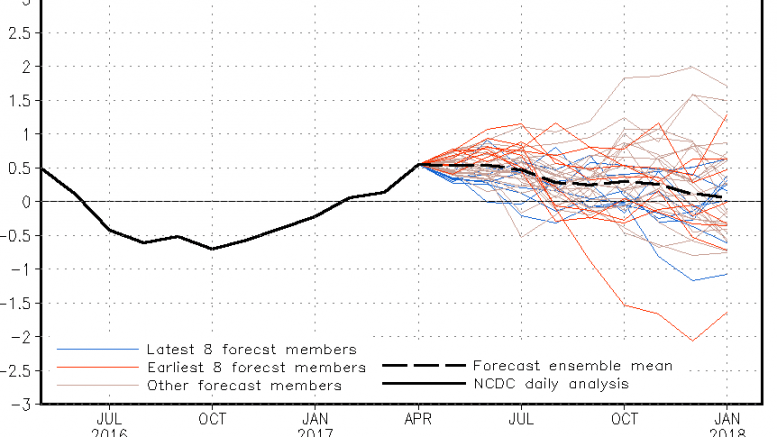 PACIFIC SLOWLY WARMING, AS MODELS BACK OFF ON LONG-RANGE EL NIÑO EXPECTATIONS FOR SUMMER AND FALL…

This month in ENSO-land, reports of El Niño’s birth continue to be highly exaggerated. In the west, SST anomalies warmed a bit over the course of April as tropical easterlies weakened; the last weekly anomaly in the key Nino3.4 region is +0.5C, with an April average of about +0.4C. This is just shy of the threshold that, if these anomalies are maintained over a five-month period, would result in the declaration of an official El Niño event. However, while the easterlies are weaker than average over the past several weeks, low-level winds have generally remained out of the east, as seen below at left. This is crucial as in absolute terms, westerly wind bursts in the spring are what typically kick the Pacific into El Niño mode. At the same time, Nino1+2 region temperatures in the eastern Pacific continued to ease in April as the easterlies were generally a bit stronger than average over the course of the month, retreating further from the very warm conditions observed in late winter there.

In other measures, the ocean/atmosphere system did make some progress towards more El Niño-like conditions, including several powerful drops in the Southern Oscillation Index (at right,
above), measuring anomalies in the trans-Pacific surface pressure gradient. However, while SOI is negative currently (denoting El Niño-like conditions), it is forecast to rise quickly and remain positive over the next two weeks. Subsurface 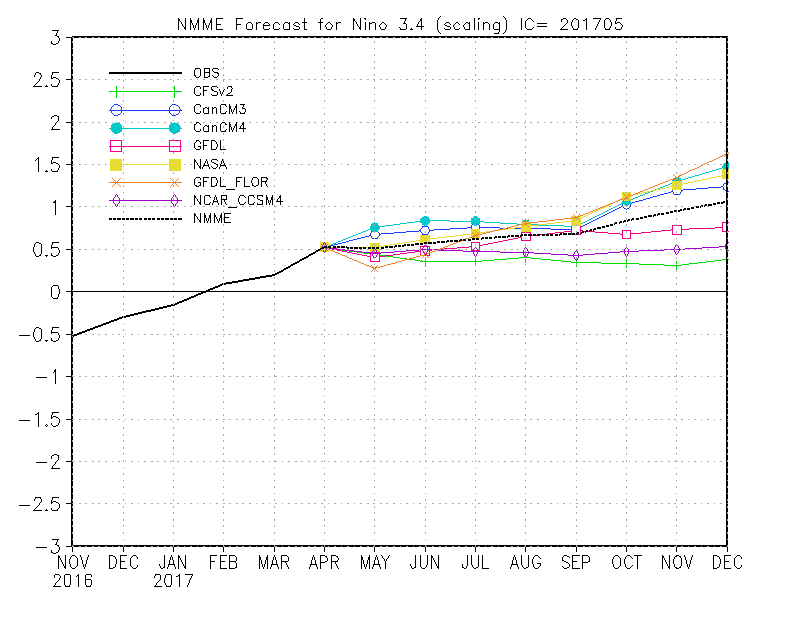 water temp anomalies also continue to not trend favourably for a developing El Niño, with a pool of cool waters 50-100m below the surface in the central and eastern Pacific. On the whole, subsurface warm water volume, which is strongly linked with future ENSO state at a lag time of three to nine months, actually ticked down a bit in April and remains near zero. In general, oceanic and atmospheric observations support a continued neutral ENSO phase in April and to the present, which is significant because April is a favored time for the kind of rapid changes in ENSO state that are rarely seen at other times of the year.

There are some major shifts in modelling to discuss, which may have major implications for hurricane season and the summer forecast. To get to the point, the North American Multi-Model Ensemble, which averages the output of seven American and Canadian dynamical models is significantly cooler in the May forecast run relative to the April data. Rather than developing a moderate +ENSO event over the summer, the NMME (at left) now suggests that there will be little to no additional Nino3.4 region warming into the fall, with perhaps some slow increases in SST anomalies after that.

This is a notable shift across many of the individual ensemble members in the last month, which when accounting for the background warmth in global oceans, are now 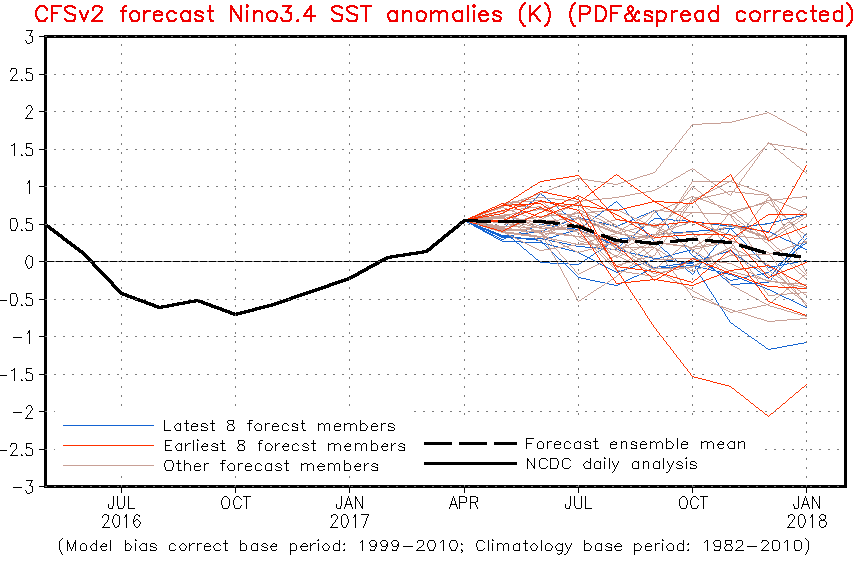 showing ocean/atmosphere coupling consistent with neutral ENSO conditions rather than the borderline weak El Niño conditions described by the topline numbers. To focus on the CFS forecasts in particular, which among the dynamical models were early to latch on to this trend, it is clear at right that the most recent runs are suggesting a retreat to near-zero Nino3.4 anomalies by the fall. This is remarkable, as the CFS actually has a warm bias in ENSO forecasts, which it shares with the Euro model among others. The statistical models in April are little changed from their earlier expectation of continued neutral-positive conditions.

This trend in the models is likely due to the forecast for enhanced easterlies in the central Pacific over the next two weeks, which the CFS suggests will also spread east by the end of May, as well as the fact that the Pacific is now over halfway through the spring predictability barrier of ENSO uncertainty. As mentioned last month, it remains worth noting that from a climatological perspective, it would be extremely unusual for a moderate +ENSO to follow just 1-2 years behind the “super” El Niño of 2015-2016. Typically, strong +ENSO events are spaced 4-6 years apart to allow the reservoir of warm water with depth in the Pacific to recharge.

In any case, this is a major change in the dynamical modelling towards the summer/fall ENSO-neutral conditions that WeatherTiger’s ENSO Whisperer model has indicated for several months. 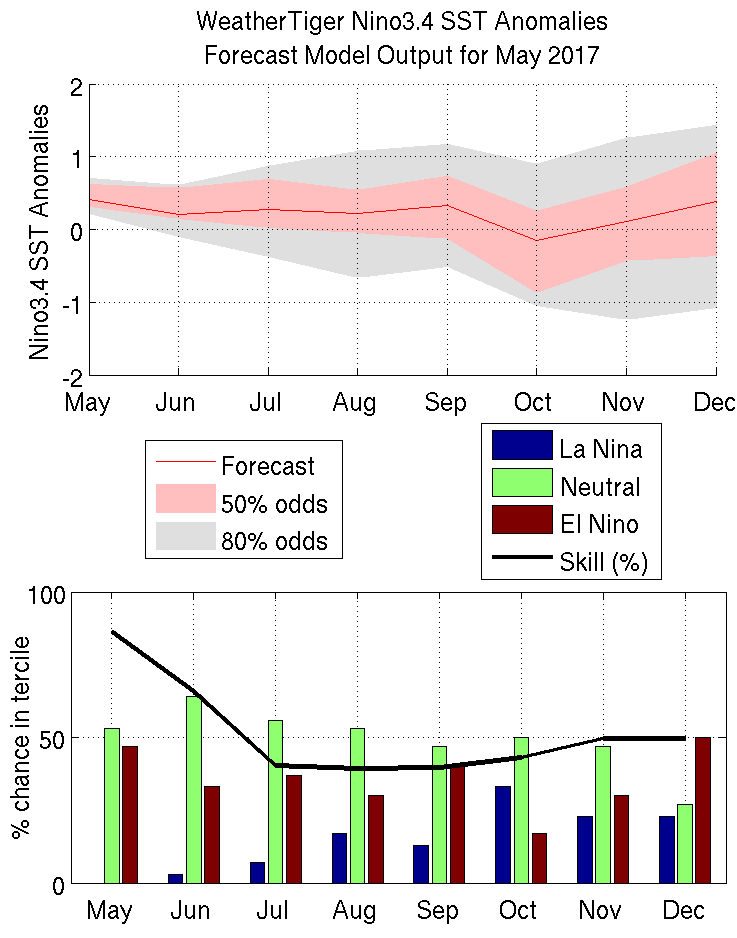 Overall, the unsteady and weak nature of the observed warming in the past month has reduced some of the uncertainty in our ENSO outlook.  With most dynamical models easing off on projected El Niño strength, our forecast blends these trends, current observations, and output from our own proprietary model of ENSO trajectory. Output for the May run of the El Niño Whisperer is at left, predicting the monthly values of the Nino3.4 SST anomalies through year’s end.

In general, the May model has trended cooler than last month’s in the short- and long-term. Our probabilistic assessment for May is therefore in two months (mid-July), there is a 60-65% chance of neutral conditions, 35-40% chance of weak El Niño, and negligible chances of La Niña. Risks of moderate or strong El Niño developing are commensurately lower as well.

At very long range, with a lead time of six months (mid-November), the uncertainty interval surrounding our forecast is larger than for the summer and early fall. However, we continue to think that neutral conditions are most likely, followed by a notable possibility of a weak El Niño, and slight chances of a moderate/strong El Niño or La Niña conditions.

These confidence ranges are derived from real-time model errors, with model skill increasing as some of the spring predictability barrier is now behind us. As shown below for September ENSO Whisperer predictions at a 4-month lead time, the model had a 39% reduction in out-of-sample forecast error relative to climatology.

Overall, this means that ENSO impacts in the U.S. agricultural region this summer during growing season are even more than likely to be muted or not present. The influence of ENSO is always weaker in the summer hemisphere relative to winter, and the canonical wet/cool U.S. growing region pattern associated with El Niño is largely a function of the influence of a handful of very strong El Niño events (1982-83, 1997, etc.). Additionally, some of the “ENSO signal” in the summer U.S. climatology is not driven by the ENSO pattern itself, but rather the change in the Pacific towards positive conditions driving wetter than normal weather via the pathway of teleconnections to rapid SOI declines. With the rate of ENSO warming likely to be slow at best, and more likely neutral or even negative, this means that the risks of a continued strong pattern of wet and cool conditions is likely overstated for the central U.S. rolling forward into the summer. Note that I am not calling for warmer/drier conditions in the corn belt (though warm risks increase further east), but rather that temps are not likely to be below normal, or precipitation massively above average as seen this spring. For hurricane season, a weaker El Niño is less likely to drive a below average hurricane season, as we stated in our April outlook; the next hurricane season forecast update from WeatherTiger in early June will discuss these implications more fully. Until then, we’ll keep watching the Pacific, and as always, keep watching the skies.