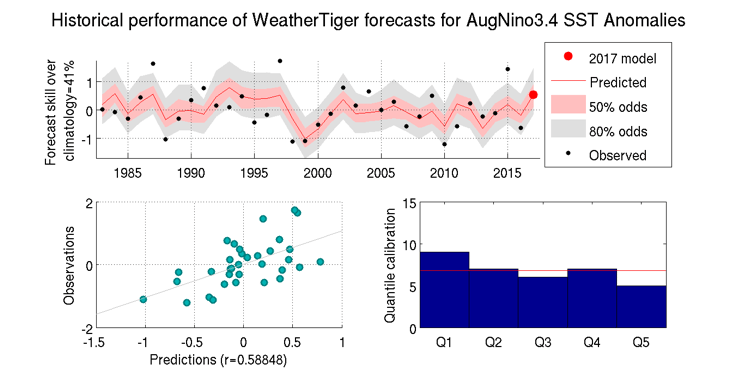 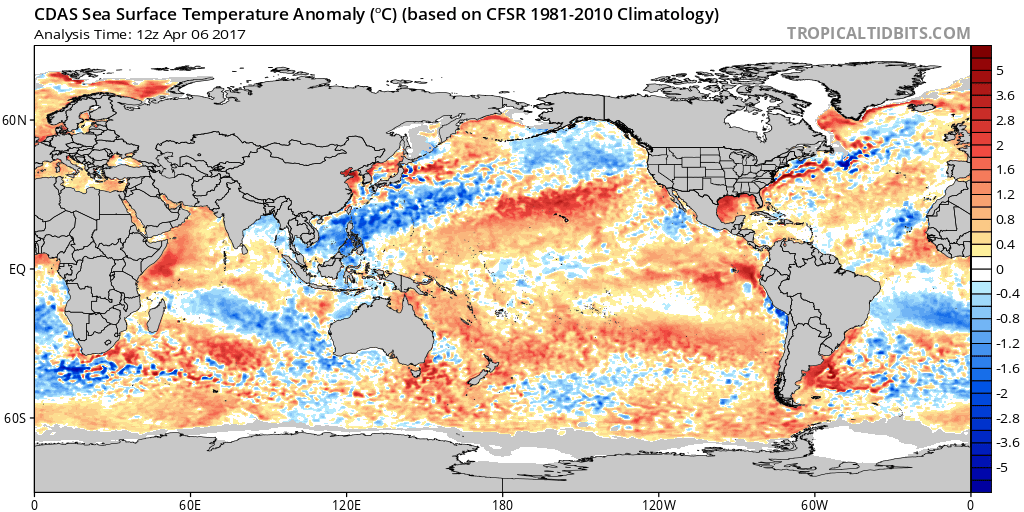 This month in ENSO-land, the equatorial Pacific is showing a Harvey Dent-like split personality between its eastern and western halves. In the west, some cool SST anomalies are lingering from the past winter’s weak La Niña event, and the subtropical Pacific is also more in line with weak La Niña expectations. However, in the east, an event dubbed “El Niño Costero,” or coastal El Niño, is raging, with Nino1+2 temperatures nearly the highest in 100 years. The proximity of this extreme warmth to South America is touching off floods in Peru and Colombia and regionally influencing the S. American weather pattern. However, positive and negative ENSO events are officially determined based on SST anomalies in the central Pacific (Nino3.4) region, so ENSO remains in neutral territory as March Nino3.4 anomalies were -0.02C, with a last weekly anomaly of around +0.3C. 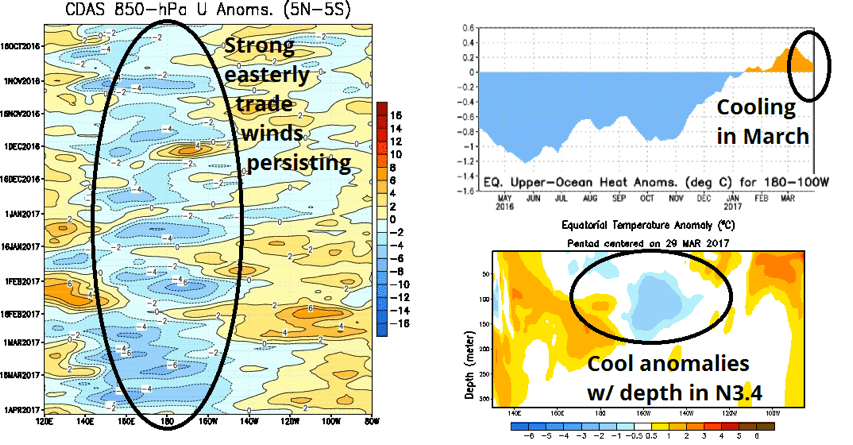 Other measures of the overall Niña or Niño-like state of the ocean and atmosphere system also auger poorly for the rapid evolution of a strong +ENSO event this summer. At left, it is clear that the weakening of easterly trade winds that typically precedes a transition to +ENSO conditions is utterly absent in the Nino3.4 region; in fact, the trades are stronger than usual, and the Euro Ensembles show that trend persisting over the next two weeks. At right, subsurface water temperature anomalies are also not trending favourably for a developing El Niño. Integrated anomalous heat in the upper ocean, which had already been anaemic for a developing Niño, has dropped over the course of March. This is partly due to a developing subsurface region of cool anomalies in the central Pacific. Warm water volume below the surface of the Pacific is strongly linked with future ENSO state at a lag time of three to nine months. Overall, we are squarely in neutral conditions, with no indication in the observations of a rapid exit from Pacific neutrality.

Modelling, particularly dynamical modelling, tells another story. At left, the plume of global ENSO models for March continues to indicate a quick shift into weak Niño territory (+0.5C or above) through the spring, and the development of a moderate (+1.0C or above) +ENSO by August. The widely distributed and well-regarded March European model is particularly aggressive in this regard.

However, the suite of statistical models in that same plot above left generally is reaching a much different conclusion, scraping along at neutral-positive or weak Niño conditions through the summer and fall. While the skill scores of these models are generally somewhat lower than the dynamical products, there are several reasons why the statistical models may indeed be on to something this year. For one, the Euro model has had a very persistent warm bias over the past 8 months, as can be clearly seen in this animation.  In general, dynamical models tend to miss warm in these type of transitional cases, favouring “run-away” extreme solutions.In the case of the American product (CFS), the model has a known problem of overforecasting El Niño events even after removing the CFS’s warm bias, as shown at right. It is also worth noting that recent CFS runs have backed off on the 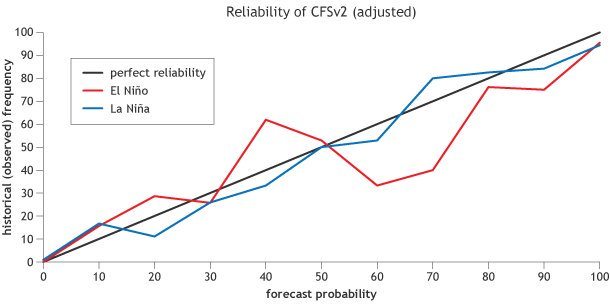 more extreme solutions it was showing for summer and fall several months ago.

Finally, from a climatological perspective, it would be extremely unusual for a moderate +ENSO to follow just 1-2 years behind the “super” El Niño of 2015-2016. Typically, strong +ENSO events are spaced 4-6 years apart (at least) to allow the reservoir of warm water with depth in the Pacific to recharge via ocean-atmospheric thermodynamic pathways. Sui generis events are always possible, but I want to see extraordinary evidence before calling an extraordinary event, and I do not see that presently. 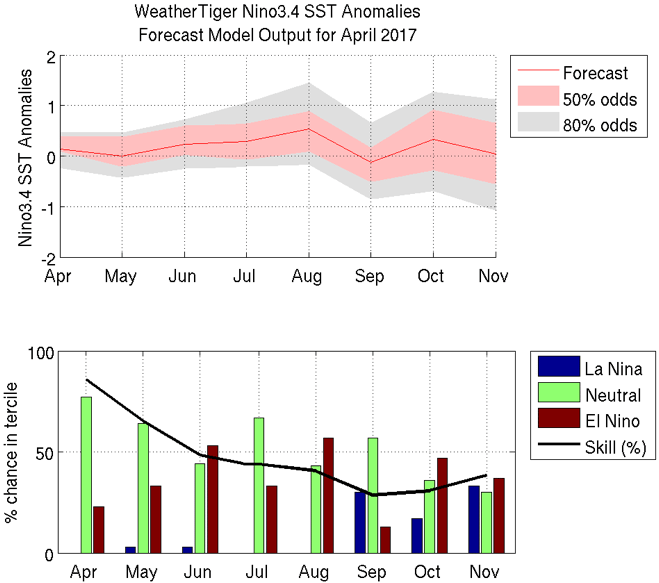 Overall, the unsteady and weak nature of the observed warming phase has led to continued evolution in our ENSO outlook.  Most dynamical models have also eased off on the projected El Niño strength at least somewhat, while still seeming too strong given the initial conditions. Our forecast blends these observations with output from our own proprietary model of ENSO trajectory, the estimable “El Niño Whisperer.”

Output for the April run of the El Niño Whisperer is at left, predicting the value of the key Nino3.4 SST anomalies. In general, the April model has trended cooler than last month’s in the short-term and the long-term as well, and predicts that only weak El Niño conditions are likely by the end of summer, with perhaps a drift back towards neutral-positive conditions in the fall.

Our probabilistic assessment for April is therefore in two months (mid-June), there is about a 55% chance of neutral conditions and 45% chance of a weak El Niño, and negligible chances of La Niña.

Further out, in four months (mid-August) there is a 15% chance of moderate or strong El Niño, a 35% chance of weak El Niño, 50% chance of neutral, and a less than 5% chance of weak La Niña conditions in the equatorial Pacific. The confidence ranges are derived from real-time model errors, and April ENSO Whisperer skill is notably higher than March as we start to chew through the spring predictability barrier. As shown above for August predictions at a 4-month lead time, the model had a 41% reduction in out-of-sample forecast error relative to climatology.

Overall, this scenario means that ENSO impacts in the U.S. agricultural region this summer growing season are more than likely to be muted, if present at all. The influence of ENSO is always weaker in the summer hemisphere relative to winter, and the canonical wet/cool U.S. growing region pattern associated with El Niño is largely a function of the influence of a handful of very strong El Niño events (1982-83, 1997, etc.). With the rate of ENSO warming likely to be slow, given my base case of very weak El Niño or neutral-positive conditions I think that other climate drivers will be more important than El Niño for the U.S. growing season. In South America, the stronger regional influence of the coastal anomalies and greater winter influence of ENSO are likely to combine to yield below average precipitation in northern and central Brazil, with above average rainfall and cooler than average temperatures in southern Brazil and Argentina. Nevertheless, with the large divergence between our expectations and the dynamical model consensus, WeatherTiger will be very carefully watching the evolution of the equatorial Pacific in the next 1-3 months, as this timeframe will be partially deterministic for global weather trends over the rest of this year.